A collection of articles: breaking news on the aftermath of her brutal killing: the manhunt, speculation, reflections, reminiscences and politicisation; 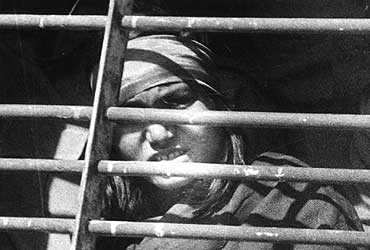 Phoolan Devi, R.I.P
The violent murder of the bandit queen and its aftereffects - reactions, politicisation, reflections and more

'They Passed Me From Man To Man, Blindfolded'
I, Phoolan Devi: The bandit queen's much-awaited graphic first person account of her humiliation and revenge
May 15, 1996

'Ab Hum Sarkar Hain...'
And since 'she is the government', the former bandit queen exercises the license to do what she likes
SOMA WADHWA
July 17, 1996