Under the pretext of '#urbannaxals', police barged into a central university campus, raided Dalit intellectual Prof Satyanarayana's house, and seized all his academic work. A student recounts the ordeal. 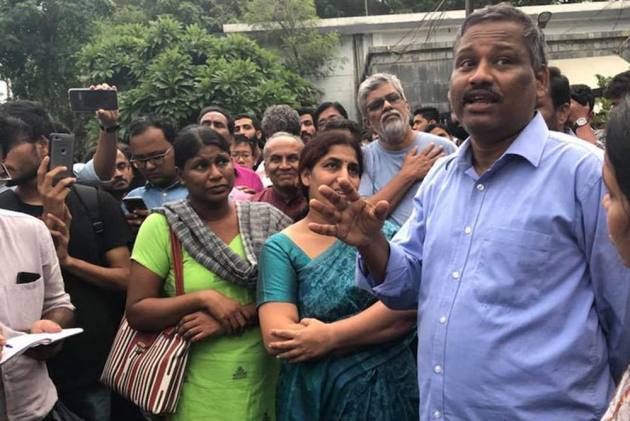 On the morning of August 28, a large number of students, teachers and staff members of the English and Foreign Languages University (EFLU), Hyderabad, anxiously gathered in front of the closed door of Prof K. Satyanarayana’s house in teacher’s quarters of the EFLU campus. The door had been bolted shut by the Maharashtra Police, which was raiding the house. Prof Satyanayana is the head of the department of Literary & Cultural Studies and the dean of the School of Interdisciplinary Studies in EFLU. The police had arrived at 8 am, and detained Prof Satyanarayana and his partner, Pavana, in their home.

The word of the 'crackdown'—coordinated raids on houses of activists and arrests—across the country was only beginning to get around. Reports were saying that activists such as Gautam Navlakha, Varavara Rao, Sudha Bhardwaj and Vernon Gonsalves, among others, had already been arrested. These speculations of arrest and the lack of any legitimate information set in a feeling of dread and uncertainty both among the group gathered outside and the family confined inside the house.

The raid ended at 6 pm, after a day-long harassment at the end of which personal belongings of Prof Satyanarayana, including laptops, books and decades of academic materials were seized by the police. The police even harassed the couple on their ideology and beliefs, and humiliated them by detaining them in their own house as university peers and students watched helplessly. The student community stood with Prof Satya sharing anger, disbelief and frustration at the government’s blatant violation and vicious attack on him and his family.

The police had entered the campus in three vehicles. One was registered in Maharashtra and the other two had local registration. They had just barged into the campus without a word and staged this whole spectacle of intimidation. And they didn't even have a search warrant. At one point, an officer from the police team came out of the house and informed us that the raid is under the CRPC section 165 and that there was no need for an arrest warrant under this section. It was only towards the end of the day that the grounds for the raid were informed even to Prof Satya, as the documents carried by the police were in Marathi and they were not translated to him in either Telugu or English until 5 pm, after he repeatedly demanded for a translator.

It became apparent then that there was no allegation against him, but he was being harassed because he was married to the daughter of revolutionary poet Varavara Rao, who had been arrested earlier in the day for his alleged 'involvement' in the Bhima Koregaon incident and the 'conspiracy' to assassinate the prime minister of the country. The police had withheld relevant information to prolong the process of the raid and unlawfully seize personal belongings of Prof Satya and Pavana. For the entire day, the police had in effect set up a camp on campus even prohibiting the media from entering the campus.

After he could finally step out of his house, Prof Satya addressed the gathering with these words:

Pavana, who is a teacher, and also a founder member of the feminist group Chaitanya Mahila Sangam, was asked why she, as a Brahmin woman, did not wear any markers of marriage like a conventional wife. She was also asked why should she also be like her father.

These questions are indicative of why a scholar such as Prof Satya will be deemed as a threat and be targeted. They fear the ideologies of Marx, Ambedkar and Phule, that stand for the fight against power. They attempt to stigmatise these ideologies by demonising those who read and follow them. They fear the autonomy of a Dalit scholar and a feminist activist. The reduction of their identity to someone’s daughter or someone’s son-in-law is a manifestation of this fear.

The police conducted the raid on the pretext of their relationship to Varavara Rao.  However, the invasion of an academic space and the confiscation of years of intellectual labour is malicious and is informed by the casteist and patriarchal understanding of government institutions like the police, which target certain individuals based on their identities. The severity of taking away the research work of a scholar and scrutinising it away from the context of academics and treating them as evidence in a law and order context is just as grave as an arrest.

As a renowned Dalit scholar with a prolific body of academic work, Prof Satya’s presence in EFLU and the academic world at large, has been instrumental in inspiring Dalit thought and building an intellectual culture of critiquing power and oppression. It is of greater relevance today when political thoughts in university spaces are increasingly being vilified by the state and institutions of power.

Marginalised students in a predominantly savarna institution like EFLU have to continuously negotiate for an equal, inclusive space and, by attacking an assertive Dalit professor, they attack the struggle for inclusion of Dalit, adivasi and bahujan students. By choosing to attack our teachers, they want to create an atmosphere of fear and insecurity for students and curb our protests and the culture of dissent. However, the students have responded to this vile atrocity of the police and the government with fury and resolve. Protests and demonstrations against this shameful act of cowardice are being carried out in the university. The teacher’s association has declared their solidaity with Prof Satyanarayana and with the students’ protest. We stand proudly with Prof Satya and Pavana until justice is meted out.

(The author is a PhD scholar from EFL University. Views are personal)