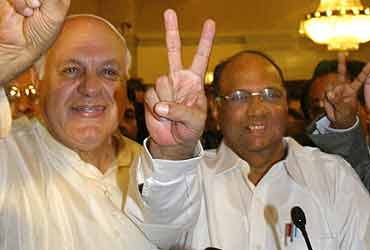 Finally, Sharad Pawar has done what all the others could not for as many as 21 years. And it perhaps took more guile and planning than any state or national elections would have called for from the master tactician. The help and expertise of the former presidents Raj Singh Dungarpur and I S Bindra also came in handy in mastering a coup that finally dethroned Dalmiya as the de facto head honcho of cricket administration in the country.

The elections last year had seen Ranbir Singh Mahendra pip Pawar 16-15, thanks to the controversial deciding vote by Dalmiya. But this time the Pawar play included meticulous planning in plotting the downfall of the Dalmiya camp: they had already issued a signed list of supporters who had pledged to back Pawar in the power struggle and it is that which resulted in his unambiguous and thumping victory by a whopping margin: 20-11. Dalmiya camp lost all the other top posts by identical 18-13 margins.

Last time around, the Dalmiya camp was up to their legal and technical wizardry and had generated a deliberate dispute over the representation of Maharashtra and Dyaneshwar Agashe, a Board member for 20 years, who was not allowed to vote. Likewise, instead of Lalit Modi voting for the Rajasthan Cricket Association, a Dalmiya man was allowed to vote, and best of all, instead of the outgoing president overseeing the election, by getting himself appointed as Patron-in-chief of Indian cricket and observer of the 2004 election, Dalmiya had also had the casting vote which had turned out to be decisive. (Dalmiya had also got a stay order from the Madras High Court on former BCCI president A C Muthaiah's plea seeking the appointment of a judge to oversee the election)

The AGM to elect the BCCI president this time around was earlier scheduled to be held in September-end but had to be adjourned sine die amid legal wrangling and mud-slinging among the rival factions. As various units of the BCCI moved the courts in different parts of the country, the Supreme Court had ordered the BCCI to complete the election process by November 30 and appointed Krishnamurthy, the vastly experienced former Chief Election Commissioner, as an observer to the elections. (This was all in the middle of the focus being shifted to the leaking of the controversial e-mail by Greg Chappell)

Predictably both camps indulged in bitter and fierce legal wrangles to disqualify associations who would not vote for them. The Pawar camp had wanted the court to appoint a three-man panel to oversee the elections. These observers would have had the power to disqualify voting associations, but they were dismissed, following another legal battle in the Calcutta High Court by Dalmiya.

And then there was the dispute with Bihar and Jharkhand as both these associations wanted separate voting rights. It was then that the Supreme Court appointed Krishnamurthy as sole observer for the elections. The suspense over representation, that led to bitter court battles and bad blood at the last AGM as also the adjourned meeting in September, ended a little after noon yesterday with Krishnamurthy resolving the disputed cases and releasing the full list of members allowed to vote: Jharkhand had been given voting rights.

The orders were passed on Tuesday morning after the Sharad Pawar group challenged Monday's order of the observer allowing votes from UP, HP and Jharkhand, which had given an edge to the Dalmiya group. Unconfirmed reports however kept leaking out that many representations were made to Krishnamury in the wee hours of the morning. The rumour was that rival factions in the three contentious associations - Himachal Pradesh, Uttar Pradesh and Bihar/Jharkhand - would be allowed to vote, in sealed envelopes, and that the votes would be counted later depending on which group was considered the authorised representative. Eventually, the difference of nine made these three votes irrelevant.

But Jagmohan Dalmiya, like Lalu Prasad Yadav in Bihar, had some things to say against the Observer: "It was not a debacle for us. One of our genuine voters was asked to sit out while a complete stranger who had nothing to do with cricket was allowed to vote. The Observer was there to see elections are held properly. But surprisingly, he started giving affiliations."

He also hinted that his group would place their point of view in the Supreme Court when the case would come up for hearing on December 12. Dalmiya said at best the verdict could have been 16-15 in favour of Pawar. On whether there was any political pressure in favour of the Pawar camp, he said, "I do not want to go into this. But, if a politician contests for a post in a sports body, it is always bound to make some difference. If you want to involve politicians in cricket affairs, then it's better to nationalise BCCI."

However, Dalmiya said he accepted the verdict and extended support for the newly-elected BCCI president. "I accept the verdict. My good wishes are with their team and if they require my support or cooperation in running the affairs of the BCCI, I will always be there," he said.

The Dalmiya-backed outgoing BCCI chief Ranbir Singh Mahendra, who lost to Pawar, also criticised the decision of the Observer in depriving Himachal Pradesh of its vote. "Everything was working against me. First, I was deprived of my vote. Then Himachal Pradesh was debarred," he said.

In any case, as it turns out, this is one victory that Pawar would probably count as one of his most hard-fought for.