Yes, Narayan did that by writing about ordinary men and women, by translating the Indian experience into English, by doing it so easily, comfortably and without any affectation whatsoever, that it seemed enormously simple. But it's never simple. 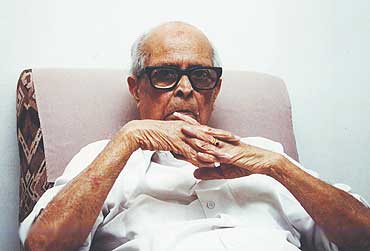 Convention dictates that one expresses shock and grief over any death, even if the person is over 90. But it seems to me that the end of such a long journey should be and is welcome. My first thought, when I hear of the death of anyone who’s lived long, always is: well, they’re at peace now, their troubles are over, they must be glad to be out of it. I am sure R.K.Narayan had his share of troubles and sorrows; certainly loneliness was a part of his life. Yet his professional life, one has to admit, was enormously satisfying.

Look at what he had -- publishers and readers both in India and abroad, critical acclaim and appreciation even from fellow writers, a very honourable place in the literature of this country as well as English literature, a great literary stature and governmental recognition. And what is more, all this came to him in his lifetime! What more can a human ask for?

But it’s with death that a person’s reputation, both personal and professional, takes a shape that it will continue to have. Death is a full stop; there’s no going on, only a looking back, an assessing and a weighing. So what is R.K.Narayan’s achievement if I look at it at this point of time? He opened out a certain India to the world, made it accessible outside by writing in English, he created a tiny space for himself and Indian writing on the literary map of the world. For his countless admirers he created the immortal Malgudi and all those people who populated it. These are all undeniable facts.

Yet I must admit that I never was a great admirer of his writing. I knew when I began that I was not going to write like any of these writers who then held sway in English writing here. I could respond to none of his books with fervour, except for 'The English Teacher' which moved me deeply. I felt his books and characters lacked any complexity or subtlety, that there was rarely any profundity in his writing. Even the simplicity which one could have admired was often dangerously bordering on naivete, on the pedestrian.

These were the reactions of a reader. Now, years later, if I have to look at him as a writer, I know that R.K.Narayan has left an indelible mark on English writing in this country. The truth is that, while only a handful of writers can change the course of literature, most serious writers do in one way or another contribute something to the literature they are part of. In fact, they are part of a chain; without them the chain cannot continue. I see it as a long road on which so many of us travel. The fact that there were other travellers before me, that they charted out a certain path, is what makes it possible for me to go on, even if I don’t take the same path. Like Virginia Woolf, speaking of the early women writers in her 'A Room of Ones Own’, says, "Without these forerunners, Jane Austen and the Brontes and George Eliot could no more have written than Shakespeare could have written without Marlowe or Marlowe without Chaucer or Chaucer without those forgotten poets who paved the ways and tamed the natural savagery of the tongue."

"Paved the ways". Yes, Narayan did that by writing about ordinary men and women, by translating the Indian experience into English, by doing it so easily, comfortably and without any affectation whatsoever, that it seemed enormously simple.But it’s never simple. Only a writer knows how difficult this is. And it’s because of what he did that it was possible for all the writers who followed to travel more comfortably; the road had been paved to a certain extent. As a writer I admire this almost invisible achievement. As a writer I admire him too for the fact that while his contemporaries seem dated, that while they have been relegated to the back shelves, he is still read and enjoyed. I envy him for his large and dedicated readership all over the world -- a readership that consists of ordinary readers as well as academics, critics and writers of acclaim.

What more does any writer want?