Both the aggressive polemic and the hostilities along the LoC seem likely to escalate as the elections near. Whether the India-Pakistan peace process can survive the multiple strains it is now subject to remains to be seen. 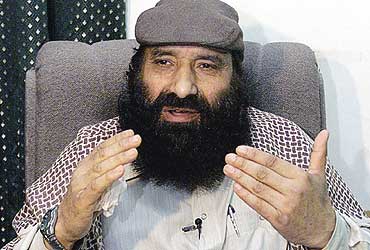 "Perhaps we should start calling ourselves the Hizb-ul-Muhajireen" (Party of Exiles or Refugees), the Hizb ul-Mujahideen's Rawalpindi-based 'supreme commander', Mohammad Yusuf Shah aka Syed Salahuddin joked to a confidante last month.

Shah's playful use of words didn't conceal the bitterness behind his remark: the feared army of Islamist guerrillas he had once commanded has now degenerated into a 'party of exiles', unwanted in both India and Pakistan.

Although elections to the Jammu and Kashmir (J&K) Assembly are still three months away, both the National Conference (NC) and People's Democratic Party (PDP) have held dozens of rallies in preparation for what all the actors know will be an intense contest. Islamist leader Syed Ali Shah Geelani is also campaigning vigorously, calling on his supporters to boycott the elections. High voter turnouts are, nevertheless, expected.

From his headquarters in Pakistan, Shah had shaped the outcome of the last elections in 2002, using his terror squads to attack NC activists and coerce its rural supporters. One hundred political workers, mainly from the NC, were killed during the election process -- adding to 61 claimed by terrorists in the election process of 1996, 57 in 1997, and 76 in 2001. Helped by the Hizb-ul-Mujahideen's (HM's) not-so-tacit support, the PDP surged past J&K's traditional party of government in several key constituencies.

Robbed of near-certain victory by NC election-rigging in the 1987 elections, when he had contested as a candidate for the religious-chauvinist Muslim United Front, Shah had crossed the Line of Control (LoC) and joined an Inter-Services Intelligence (ISI)-run jihad training camp, vowing to wreak vengeance against India and the NC.

As events have shown, Shah delivered on his threat. But the victorious homecoming he had hoped for has proved a mirage. In the years since 2002, the HM has haemorrhaged commanders and cadre at a massive rate -- leaving the terror group and its 'supreme commander' powerless spectators to the impending elections this time around. HM's rank and file are demoralised; its field units strapped for funds and weapons; and its patrons in the ISI suspicious of its motives and motivation.

For all practical purposes, what was once J&K's numerically-strongest terror group has just one field unit -- a dozen-odd operatives grouped around southern division commander Shabbir Ahmed Mir in the town of Tral.

Not surprisingly, the Hizb has been unable to mount a single attack of consequence for over a year, because cell after cell has been betrayed to the J&K Police or penetrated by Indian intelligence. Ideologically committed leaders like Pervez Ahmed Dar, who, using the code-name 'Musharraf', acts as the HM's financial chief, have attempted to staunch the tide -- but to little avail. Dar's immediate superior, Farooq Ahmad Bhat, was shot dead in February; key lieutenants like central division commander Tajamul Islam and top south Kashmir operative Raees Dar are in jail.

Ever since Nasir Ahmad Dar, the organisation's chief of military operations within J&K, surrendered to authorities earlier this year, the HM has been unable to appoint a successor. Kulgam-born Riyaz Ahmad Bhat was selected, but the commanders parents travelled to Pakistan and arranged their son's marriage, ensuring he stayed on in Pakistan rather than risking death by returning home.

To make matters worse, the ISI no longer seems to trust the Hizb. Pakistan Army units have actually turned back Hizb detachments attempting to cross the LoC this summer -- a reflection of the ISI's fear that the group's cadres are likely to tamely surrender once home. It is not an unfounded suspicion: almost a hundred Hizb operatives have done just that over the past year. Instead, the ISI is putting its faith in Pakistani jihadis. Upwards of 300 Lashkar-e-Toiba (LeT) cadres are thought to have massed at the Sawai Nallah near Muzaffarabad, along with similar numbers of Jaish-e-Mohammad (JeM) cadres at Chela Bandi and al-Badr at Chetiyan. Signs of the jihadi build-up are already evident. Bus passengers near the Lolab Valley, for example, were twice stopped by jihadi units last month, and asked to turn in any policemen amongst them.

Despite such efforts, though, secessionists have had no success in disrupting the build-up to the elections -- something that is causing growing dissension within their ranks.

In a recent statement faxed to journalists in Srinagar, United Jihad Council (UJC) spokesperson Syed Sadaqat Husain lashed out at the All Parties Hurriyat Conference (APHC) for refusing to condemn the elections, a decision he described as "an error history shall never forgive." Husain said the APHC's silence "could only be interpreted in two ways clandestine agreement with New Delhi or the loss of popular support". He argued, further, "When India, under the shadow of gun, wants to hold an election to portray to the world that circumstances in Jammu and Kashmir are normal, that the resistance movement has died down and that the people of the state have accepted the accession to India, the foremost responsibility of the Hurriyat leadership is to campaign, educate people and warn them by removing the curtain hiding the Indian deception."

Hizb chief Shah himself has been increasingly theatrical in his polemic, promising attacks against Israeli tourists in J&K, for example, and even threatening to take the jihad "to Lahore" unless Pakistan reverses its policies. But both in Pakistan and India, this polemic is understood for just what it is: the rage of an ageing and battered beast that has lost its bite.

Does all this mean Pakistan has given up the fight? Not quite.

For one, Pakistan seems determined to reduce its commitments in the fight against the Taliban along its border with Afghanistan, in an effort to heal the jihadi-Army rupture that emerged during the later years of President Pervez Musharraf's tenure as Army Chief. In a recent article in The Washington Post, commentator Ahmed Rashid said that the bulk of Pakistan's Army would be deployed along its borders with India -- not committed to counter-terrorism operations in the North West Frontier Province (NWFP). Rashid noted that "more than 80 percent of the $10 billion in U.S. aid to Pakistan since the September 11 attacks has gone to the military; much of it has been used to buy expensive weapons systems for the Indian front rather than the smaller items needed for counterinsurgency".

Pakistani strategists understand, moreover, that the coming elections will be a critical test of the legitimacy of the secessionist project in J&K. If turnout is high -- and the secessionists of the APHC, expecting it to be so, have already started saying the elections are about administrative issues, not J&K's future -- what little claim the jihadis can make to represent the peoples of the state will lie in ruins. That stark fact, in turn, appears to be compelling Islamabad to step up the heat in J&K -- notwithstanding the desire to avoid a crisis with India at a time when multiple internal crises threaten to tear Pakistan apart.

Indian troops stationed along the LoC in Poonch have consequently come under intense fire along the LoC several times over the past six weeks (since the first incident on May 8), a series of assaults which could lead to the unravelling of the ceasefire which was put in place in 2003. For example, an Indian forward position near Salhotri village, was hit with rockets and grenades just after 8:00 AM on May 19 -- the first ceasefire violation along the LoC this year to have claimed a life: Jawashwar Lami Chhame, a Nepali national serving with the 2-8 Gurkha Rifles, died when he was hit by shrapnel in the course of the estimated 20-minute assault.

Salhotri had seen a build-up of tensions since late-April, when terrorists began to use Pakistani military positions as staging posts for infiltration attempts. Indian troops interdicted an infiltrating group on the Tarkundi Gali pass on May 16, and killed one terrorist. It is impossible to say whether the attack that claimed Chhame's life was carried out by terrorists or troops -- but the fact is the Pakistan Army did nothing either to prevent the attack, or to punish its perpetrators.

Earlier in May, Pakistani troops opened fire on an Indian position in Tangdhar with machine guns and mortar. Several shells fell close to the post in the course of the May 13 night-time assault. No casualties were, however, reported.

Pakistan's Army-led border police, the Rangers, are also thought to have provided logistical support for a May 8 infiltration attempt which involved cutting through border fencing near Samba. Both terrorists who crossed the fencing were interdicted and shot dead two days later at the village of Regal. Four civilians -- among them news photographer Ashok Sodhi-- were killed in the fighting, along with two soldiers.

Border Security Force (BSF) officials say three earlier attempts to penetrate the border fencing near Jammu had been made this year, starting with a February 22 incident near Makwal where two infiltrators were shot dead. On March 3, a terrorist was killed while attempting to cross the fencing near the Chak Rangwari post, while another attempt was made near Chak Abdullian on April 30.

In an effort to improve border security, the BSF now intends to realign fencing along the India-Pakistan border in Jammu, while the Indian Army is enhancing counter-infiltration measures along the LoC.

Pakistan's posture along the LoC seems linked to the lifting of restraints imposed by the Musharraf regime on J&K-based jihadi groups -- restraints that saw violence decline each year since 2002. In a March 1 video-phone address to a Lashkar rally in Pakistan-administered J&K's capital, Muzaffarabad, the LeT chief Hafiz Mohammad Saeed announced that restrictions placed on the terrorist group's operations had been lifted. Soon after, Indian intelligence began reporting a build-up of Lashkar cadre at infiltration staging-posts along the LoC. A new state-of-the-art wireless communications station was set up by the proscribed group at the town of Kel, just across the LoC from Lolab, while a training centre at Balakote was revived. A new basic training facility was also set up at Gujaranwala, in the province of Punjab.

JeM chief Masood Azhar was also released from house arrest, and allowed to parade with armed cadres in the town of Bahawalpur -- a defiant show of strength by one of the world's best known Islamist terrorists.

Pakistan's ISI Directorate also resumed funding for the HM, which had been shut off under international pressure in 2006. In May 2008, jihadi groups jointly paraded in Muzaffarabad under the leadership of HM's Yusuf Shah, in their first public show of strength since 2001. Shah, who also chairs the UJC, announced he would "continue jihad in Kashmir until the region is liberated from Indian occupation".

Both the aggressive polemic and the hostilities along the LoC seem likely to escalate as the elections near. Whether the India-Pakistan peace process can survive the multiple strains it is now subject to remains to be seen.