At least 22 Pakistani riot policemen and four civilians are reported to have been killed and over 65 injured when a suicide bomber blew himself up near the Lahore High Court ahead of a planned protest by lawyers... 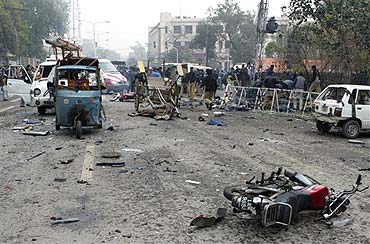 At least 22 Pakistani riot policemen and four civilians are reported to have been killed and over 65 injured when a suicide bomber blew himself up near the Lahore High Court ahead of a planned protest by lawyers on January 10, 2008.

Mr Malik Iqbal, the police chief of Lahore, has been quoted as saying that the bomber was on foot and detonated his explosive device at 11.45 am (local time) near a security barrier set up by the police close to the Lahore High Court ahead of the lawyers' protest march to press for the reinstatement of the judges sacked during the recent Emergency by President Pervez Musharraf for refusing to take a new oath under an executive order issued by him instead of under the Constitution as prescribed.

A bench of the Supreme Court consisting of the pro-Musharraf judges dismissed petitions challenging the proclamation of the Emergency by Musharraf and validated his re-election as the President by the previous National Assembly elected in 2002. Thereafter, he got himself sworn in for a second term as the President, lifted the Emergency and restored the Constitution. All the pro-Musharraf judges were sworn in under the Constitution.

Before his being sacked, the former Chief Justice Iftikhar Ahmed Chaudhury had ordered the re-opening of the Lal Masjid of Islamabad and the restoration of its management to the clergy, who were responsible for it before Commandoes of the Special Services Group (SSG) had raided it from July 10 to 13,2007. He had also taken up for enquiry reports alleging that a large number of tribal girls studying in the girls' madrasa attached to the Lal Masjid were killed during the commando raid. This enquiry was stopped by the new pro-Musharraf judges.

Since then, there had been fears that the jihadis from the tribal belt as well as the Lashkar-e-Jhangvi (LEJ), who have carried out a number of suicide attacks against the Police, the SSG, the Army, the Air Force and the Inter-Services Intelligence (ISI) after the Lal Masjid raid, might start targeting the new judges of the Supreme Court as well as the provincial High Courts. Musharraf had ordered the tightening of physical security for all the new judges and the buildings of the Supreme Court and the High Courts.

It would seem that the Lahore High Court and not the policemen were the primary targets of the suicide bomber. The policemen got killed when the bomber was stopped at the security barrier. He blew himself up before he was frisked.

This is what happened during two attempted suicide bombings targeting the General Headquarters (GHQ) of the Pakistan Army in Rawalpindi after the Lal Masjid raid. The suicide bombers, who were planning to blow themselves up outside the GHQ, blew themselves up when they were stopped at the security barriers. Security personnel posted at the barriers were killed and not Army offiers.