Out Of BJD, Jay Panda Holds His Own Chai Pe Charcha

Panda set the ball rolling on Sunday by announcing the event on Twitter and inviting everyone to join in for a cup of tea and some chat. You can keep Baijayant ‘Jay’ Panda out of the party. But you cannot keep him out of action. Not for too long.

And when the former BJD leader and once a close confidante of chief minister Naveen Patnaik held his own version of ‘chai pe charcha' at an iconic spot in capital Bhubaneswar, he set the cat among the pigeons over his potential game plan in the run-up to the general elections and assembly polls in Odisha next year. Panda, 54, was suspended from the BJD in January for alleged anti-party activities and he subsequently quit the party in May.

The event on Monday at Mausima Square, located in old Bhubaneswar, was titled Heijau, which means ‘ho jaye (let it happen) and was organised through Twitter, a social media platform where Panda is very active.

The get-together was held at a popular roadside tea stall in the evening, when the area is crowded with people returning from office and shoppers.

Panda revealed little about his plans for the future but said such interactions are part of the process of deciding what would be the best course for him. “I have received requests to have such get-togethers at several places, including in Delhi and Bengaluru. There will be more such events in the coming days,” he said.

Political analysts see this outreach as part of Panda’s efforts to shake off his image as a ‘Twitter Tiger’ and prove to his critics that he can be a tiger on the streets too.

Some of those present were clearly overwhelmed.

"This is definitely something new in Odisha politics. I can’t recollect any other political leader who has come down to the streets to meet people. He is certainly like a breath of fresh air,” said a retired air force pilot. Most of the people present at the event were, however, Panda’s young followers. 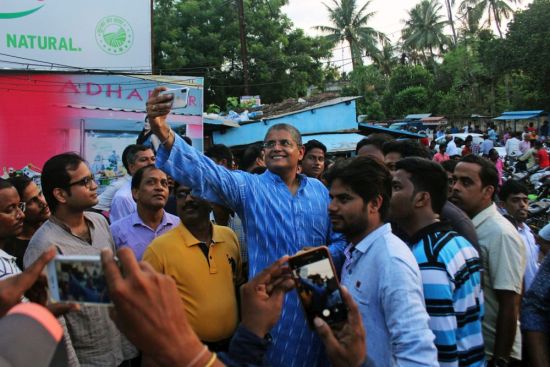 Panda, who was elected from Kendrapara in 2014, resigned from the Lok Sabha in June.

Panda set the ball rolling on Sunday by announcing the event on Twitter and inviting everyone to join in for a cup of tea and some chat. The hashtag #Heijau apparently had its origins in a tweet by one Dibyaranjan Mishra, an ardent follower, asking Panda on May 21 why he didn’t organise such an event in Bhubaneswar after watching videos of similar impromptu gatherings in Kendrapara.

Panda agreed and promptly fixed it for the next day. But the event had to be rescheduled as his father Dr. Bansidhar Panda died the same very day. “I am pleased as punch at this opportunity of meeting him in person,” said a beaming Dibyaranjan, who was part of the crowd on Monday.

Many of the youngsters were seen clicking selfies with an obliging Panda.

The stall owner too looked mighty pleased with this sudden windfall as tea flowed like water with everyone, even passersby, partaking of the offer.

It was not all ‘chai’ though. There was some ‘charcha’ too during the hour-and-quarter long gettogether. The questions ranged from migration of Odia youths outside the state in search of employment to the Kim-Trump meeting. Panda listened patiently to everyone and answered them all. He had a few questions of his own too.

The accidental presence of the ebullient Suresh Routary, a local Congress leader popular for his humorous antics, provided just the kind of drama that the event needed. “Baijayant Babu is a very good man. Let him contest the next Lok Sabha election from Bhubaneswar as an independent. We will lend him full support,” the maverick Congress leader said, evoking peals of laughter from the approving crowd. But no one who knows Routray’s ways was surprised at his unexpected statement nor did it set political circles aflutter. Everyone took it as good fun.

The BJD has, however, not commented on Panda’s event so far. But with the popular leader throwing the gauntlet, it may not be long before Patnaik is forced to take notice and react.