How can we dare to even pretend to aspire to climbing up the global ranking of 'developed' countries, when we allow our most vulnerable people to be raped, tortured, beaten and murdered?

Don't be emotional the editors say. Don't be sensational. But how does a mere writer get ordinary Indians to react to an ordinary Indian situation which is extraordinarily, unspeakably cruel?

Nine month old Divya and two-and-a-half year old Vaibhav were not just brutalised — they were viciously murdered. Pronounced dead on arrival at a Delhi hospital this Monday, they'd been burnt alive and charred beyond recognition. Ostensibly this was the outcome of a running battle between the dominant caste of Rajputs and the dalits of a village near Faridabad just outside the nation's capital. In reality, this is just another example of what happens when dalits assert themselves in any way — very simply they are killed. And killed brutally as in this case. They are after all the "expendables" of our society.

Predictably, their deaths have not provoked any national outrage or protests, Neither in Delhi, nor elsewhere in India. Local dalits blocked a highway and the policemen deputed to guard the family (because of an earlier violent incident and threats) have been suspended. Oh yes. They were given compensation. Ten lakhs appears to be the sanctioned amount that the Haryana government believes can compensate for one's child being cruelly murdered. That seems to be the sum total of the nation's reaction. Because caste is an old story. And dalits being killed is commonplace, everyday news. So not news at all, really. They're killed every hour actually. Even if we go by the statistics of the National Crime Records Bureau here's what dalits face on a daily basis : every hour two dalits are assaulted, every day three dalit women are raped, two dalits are murdered, and two homes are torched. Jitender ( Divya and Vaibhav's father) and his family fall into the statistic of the last two categories. Rekha, the mother of the toddlers, is still recuperating from serious burns at the Safdarjung Hospital in Delhi.

So who cares? Where's the news story in some dead dalits?

Atrocities against dalits have been going on for thousands of years. We are no longer shocked. We don't give it a second thought.

But two infants? Sentenced to death by fire — the slowest, most excruciating, agonising way to die. Heinous crime? Hardly anyone really noticed it. 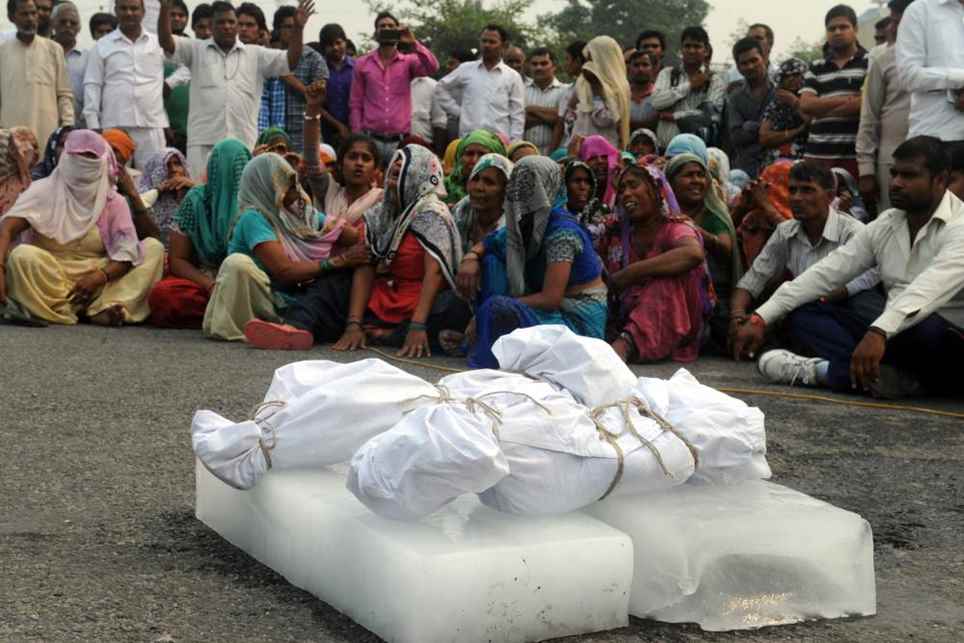 When will we cease to ignore dalit deaths? How can we dare to even pretend to aspire to climbing up the global ranking of 'developed' countries, when we allow our most vulnerable people to be raped, tortured, beaten and murdered every single day, with total impunity? What a wretched, shameful country we are. We preen about past glories, about the wonderful civilisation we were 5000 years ago when the rest of the 'developed' world ran around in skins.

Unless caste is eliminated from our villages, we will always be a backward, primitive, feudal and hateful society. No matter how many SMART cities we build, no matter how many brilliant doctors, engineers and IT experts we export to the west, as long as we rape dalit women to teach their menfolk a lesson, as long as we continue to kill dalit men because they assert their rights as citizens of this country, we must be dismissed as a truly backward, barbaric society. What happened to little Divya and Vaibhav is surely beyond barbaric.

My writing has taken me to dalit villages all across the country and everywhere it is the same refrain — 'When will it end?' We excel in the art of perennially waving the flag boasting about our ancient glorious culture. While there is much to be proud of, we cannot ignore the terrible suppression of a large segment of our people. We have to acknowledge the evil in our past and atone for it. We cannot provide justice to the billions who died eons ago. But we have to punish the guilty today.

Our Constitution, framed by a dalit incidentally, laid the foundation for a nation built on democracy and equality for all. But democracy and equality are incompatible with caste. The two cannot co-exist because by definition, caste decrees that some are superior to others, purely by virtue of their birth. When it comes to caste we have managed to subvert the Constitution by every trick in the book for close to seventy years. If India is to become civilised, caste must go.

We seem to regularly hit international headlines now, for all the wrong reasons. Last week, we had the unspeakable rape of two infants in Delhi. This week began with the burning alive, the utterly gross murder of two dalit babies. So finally, having reached the pits, it is not only the dalits who are asking "When will it end"? Decent, fair-minded Indians too are ashamed to belong to a society which burns it's babies.

As a writer words are my only weapon. For Vaibhav and Divya, the two innocent victims of caste, consigned to flames before they could even begin to live, how futile, how impotent, how utterly worthless these words are.

As a nation we have to go beyond words, beyond mere platitudes and act. Punishing the guilty is a good place to start. The rapists and murderers of dalit women, men and children who have been given impunity for centuries must realise that they can no longer look upon this as their birthright. That they will be held to account and punished as they would in any civilised society. Perhaps then at last the dalits of our country will see the beginning of the end of the inhumanity of caste.