In Lockdown 2.0, the emphasis was on both life and livelihood. India is entering phase 3 after much talk of economic revival, and fears over loss of livelihood claiming more lives than COVID-19. 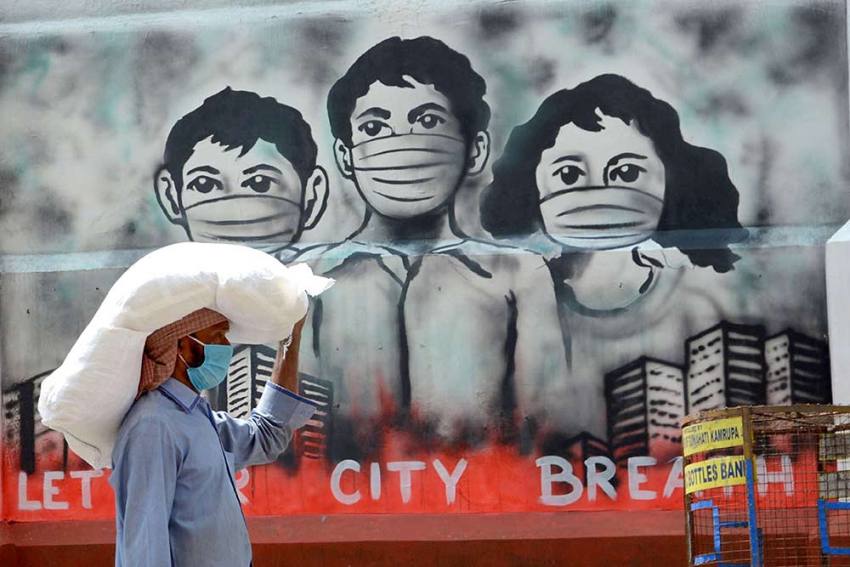 A labourer carrying goods walks past a mural, during the nationwide lockdown in the wake of coronavirus pandemic, in Guwahati. (PTI)
Shastri Ramachandaran 2020-05-04T10:36:45+05:30 Undoing Lockdown A More Fraught Proposition Than Imposition. Hence Modi Is Absent 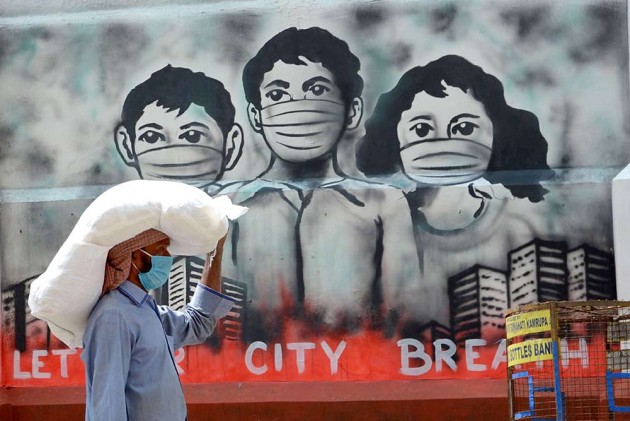 Although the nation-wide shutdown has been extended by another two weeks, much has changed since Prime Minister Narendra Modi’s televised address of March 24 when he declared the first lockdown to fight the pandemic. When Modi took the centrestage a second time, the lockdown’s extension to May 3 was, atypically, projected as a decision wanted by all chief ministers. It was not a media event with the kind of build up which preceded the two previous announcements.

The latest extension came in the form of a statement from the Ministry of Home Affairs (MHA). It was also preceded by a consultation with chief ministers and Central teams visiting some states for a review. Significantly, the Prime Minister did not seek media limelight to announce it. More than continuation of the lockdown, the MHA’s statement underscored the many restrictions to be eased and activities to be resumed.

Besides the change in form and focus on personality, there was also a notable shift in emphasis. In the first act, where Modi appeared as the saviour amid an unprecedented public health emergency, India was shown as having chosen life over livelihood. In Lockdown 2.0, the emphasis was on both life and livelihood. India is entering phase 3 after much talk of economic revival, and fears over loss of livelihood claiming more lives than COVID-19. Curiously, the notification does not dwell explicitly on either life or livelihood. The focus seems to be more on the logistics of easing the lockdown and what reopens.

Undoing the lockdown is a more fraught proposition than its imposition. Hence, we saw Modi’s sole ownership of the process while imposing the lockdown. Its unpopularity – combined with the threat it posed to life and livelihood – left the Centre with no choice but to work, in concert with the states, on easing the lockdown.

A dam-burst of hungry, jobless, homeless millions breaking out of a 40-day containment, raring to vent their anger, resentment, deprivation and fear would have been disastrous. That would hardly help create conditions for reviving economic activity.

While Alibaba is a flourishing reality, thanks to Jack Ma, here ‘Open Sesame’ cannot work an economic miracle. Reopening is harder than locking down. The economy can be frozen by a fiat, but not opened by diktat, especially one of India’s size, diversity and disparities. The pitfalls are far too many.

Easing towards normality means different things to different states and sections of people. For Uttar Pradesh, Bihar, Bengal, it may mean bringing migrants back from Maharashtra, Karnataka and Kerala. For Karnataka and Maharashtra re-starting economic activity requires keeping back the workers. States which once rooted for sons-of-the-soil policy are now singing a different tune -- one of many post-COVID changes that are emerging.

The 11 crore workers in the crucial MSME sector, accounting for 30 per cent of GDP, are widely dispersed. Lakhs of them in Maharashtra want to go back to UP. Similarly, hundreds of thousands of them in Karnataka are torn between going home and staying back for possible work. Lakhs of them in Kerala cannot afford to go back and lose their jobs.

These are the new economic communities -- defined by not their origin but the fact of being displaced -- formed by those they work with, held by new survival concerns, interests, bonds and affinities. The economy is just as complex an arrangement of supply chains, assembly lines, production hubs and networks linked by reservoirs of raw materials, tracks of finished goods and markets. The melding of human, financial and material resources for manufacturing and productive economic outcomes across India cannot be dictated entirely by the Centre, no matter how powerful.

The only way to revive the economy – like the way the coronavirus epidemic is being fought -- is by rising to the requirements specific to a region. Just as each state’s experience shaped its strategy to combat the virus, similarly each state should strive to conceive, map and execute its own plan for economic revival.

For extending Lockdown 2.0 and 3.0, the Centre and the states played at make-believe federalism: the Centre took all the decisions and decided every step of the lockdown as well as easing, but of necessity these were made to look like the outcome of a national consensus. Now, given the compulsions of the situation, with a little resolve, genuine federalism can strengthen each state to lift itself out of the lockdown, revive economic activity and continue the battle against the virus in its own way.