Both the Prime Minister and Home Minister are from non-Hindi speaking states. So it is a bit difficult for anti-Hindi parties to convince people that the NDA government is out to impose Hindi. 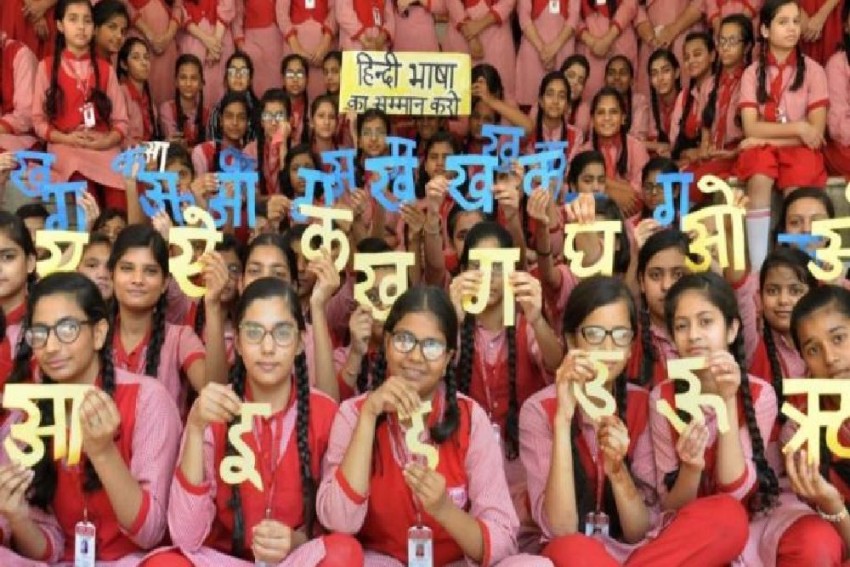 India is not new to the politics of language. Language has been used as a great unifying force and also to divide, make political capital and create mayhem.

The DMK in Tamil Nadu is one party that earned maximum mileage out of its anti-Hindi agitation. In fact, the very raison d’être of this was its blind opposition to Hindi, and anti-Hindu, anti-Brahmin violence which, at one point, had taken secessionist overtones. That was in the sixties.

The recent observations of the Union Home Minister on the National Hindi Divas that Hindi could one day develop as a national link language was sought to be exploited by Opposition parties, especially from non-Hindi speaking states in South India. The DMK in Tamil Nadu was in the forefront threatening state-wide agitations (later withdrawn after Shah clarified his stand).

It is difficult to say if there is any genuine fear in South India about the imposition of Hindi. Though there have been repeated attempts by parties opposed to the ruling BJP at the Centre to convince people that the BJP was bent on imposing Hindi on non-Hindi speaking states, there has been no mass response in the Southern states.

Even the latest move by the DMK in Tamil Nadu to whip up passions did not succeed. The protests were largely from political platforms and on paper. Why is this so? People are sensitive about protecting their mother tongue and regional languages have been flourishing since independence in all regions. Political parties of late have been finding that language protests are proving to be of diminishing returns.

To begin with, unlike on earlier occasions, both the Prime Minister and Home Minister are from non-Hindi speaking states. So it is a bit difficult for anti-Hindi parties to convince people that the NDA government is out to impose Hindi. Moreover, Amit Shah’s observations were carefully worded. He traced the history of Constituent Assembly debates on how Hindi was accepted as National Language.

At no place in his speech did Amit Shah indicate that the Centre proposed to promote Hindi in non-Hindi states. Instead, he praised the rich diversity of all Indian languages. Hindi is growing as a natural consequence of labour migration, the popularity of Hindi films and tourism. In the South, an estimated five million people, mostly from Hindi speaking states, are working as farm labourers and hotel employees.

Same is the case with people from South who are living in the North. Few decades ago labour migration was mainly from South to North. The trend has reversed after the Gulf boom. The mingling of people from North has in a big way erased language barriers. Except for Tamil Nadu, and to some extent Karnataka, in no other state, has an anti-Hindi stance gained currency.

In Karnataka, the Congress covertly fanned pro-Kannada sentiments in 2018 and in 2019 when elections were round the corner. However, this did not produce much political dividend for Congress. The DMK, which made big gains in the Lok Sabha poll in 2019, is now looking to consolidate its gains before the assembly polls due in two years. But it could not create the kind of passions witnessed in the sixties and seventies.

This basically because of two reasons. For long -- under NDA and UPA -- the DMK had shared power at the centre which mellowed the party. It used to be cozy with parties like the Samajwadi Party, which is rabidly pro-Hindi. Secondly, the new aspirational generation in Tamil Nadu is guided more by economics than language. They want better education and job opportunities.

The lure of North Indian Universities and professional institutions inspire them more than DMK leader Stalin’s boring rhetoric. The parties that jumped into the fray to twist and give a narrative of BJP’s unitarian agenda for India are the usual suspects -- the Congress, the DMK, the CPM, the CPI and the Trinamool Congress. On the Hindi issue, the Congress reaction was muted. Rather, the Congress approach has been akin to that of the BJP on Hindi.

Hindi is spoken by more than 500 million Indians. There is no other language with such presence (and growing) in India. Even in Tamil Nadu, where the DMK is a votary of English, more people speak Hindi than English. The fact is opposition to Hindi is more political than realistic. It is significant that most other non-Hindi states, and other Opposition parties, did not join the anti-Hindi chorus.

As Home Minister in the UPA government, P Chidambaram had also made a similar statement on Hindi on Hindi Divas ten years ago. At that time these parties did not protest as they were part of the UPA. Slowly but surely a national consensus is building up for India to have a national language of its own.

RKS Bhadauria To Be Next Chief Of Air Staff