While some argue that Gen-Z’s need for short-form video content can be met by homegrown alternatives, it will be hard to match the success of TikTok in terms of user engagement.

More from Aranyaka Verma
View All

On June 29, the Government of India announced a ban on TikTok and 59 other Chinese apps as a result of border clashes with China. Since then, we have read about the ban’s impact on TikTok’s parent company, Bytedance and the internet has been divided on how it feels about the loss of influencers’ livelihoods. However, this ban will have a major impact on another industry that lies at the heart of content creation on the app – the music industry.

Over the past few years, TikTok has become one of the top music discovery platforms around the globe. A democratic platform with a much talked about elusive algorithm, TikTok has made virality accessible to emerging artists and has shaped the top hits of 2019 and 2020 so far. Warner Music Group executive Manny Kupelian told triple j, “It’s like a domino effect. We see a natural progression [of the song] from TikTok to the Shazam charts to the viral charts on YouTube, Apple and Spotify,” Perhaps the most successful example of this is Lil Nas X’s Old Town Road. In India, between Gaana’s backing and a viral TikTok campaign, Jass Manak’s Lehenga sits at 810 million views as of July 11 on YouTube – a good 200+ million views more than his second most popular song Prada.

Before the ban in India, TikTok had been downloaded a whopping two billion times with an estimated 30% of unique installs coming from India. Over the past eight quarters, the app consistently maintained over 150 million downloads per quarter. Using the data available on Chartmetric, one is able to see how an increase in TikTok’s market penetration has had a direct impact on introducing new non-Indian music without major label backing to a larger Indian population. The following is a comparative chart highlighting the presence of non-Indian songs in the Indian Top 20 for three streaming services on June 27, 2020 versus June 27, 2019. The number of independent international songs in the Top 20 has doubled and over 80% of the international songs in the Top 20 are popular on TikTok. Indian-language independent musicians have also seen success through the app – 6 out of the top 10 all-time Indian tracks on TikTok were independent releases and gained considerable traction on YouTube. 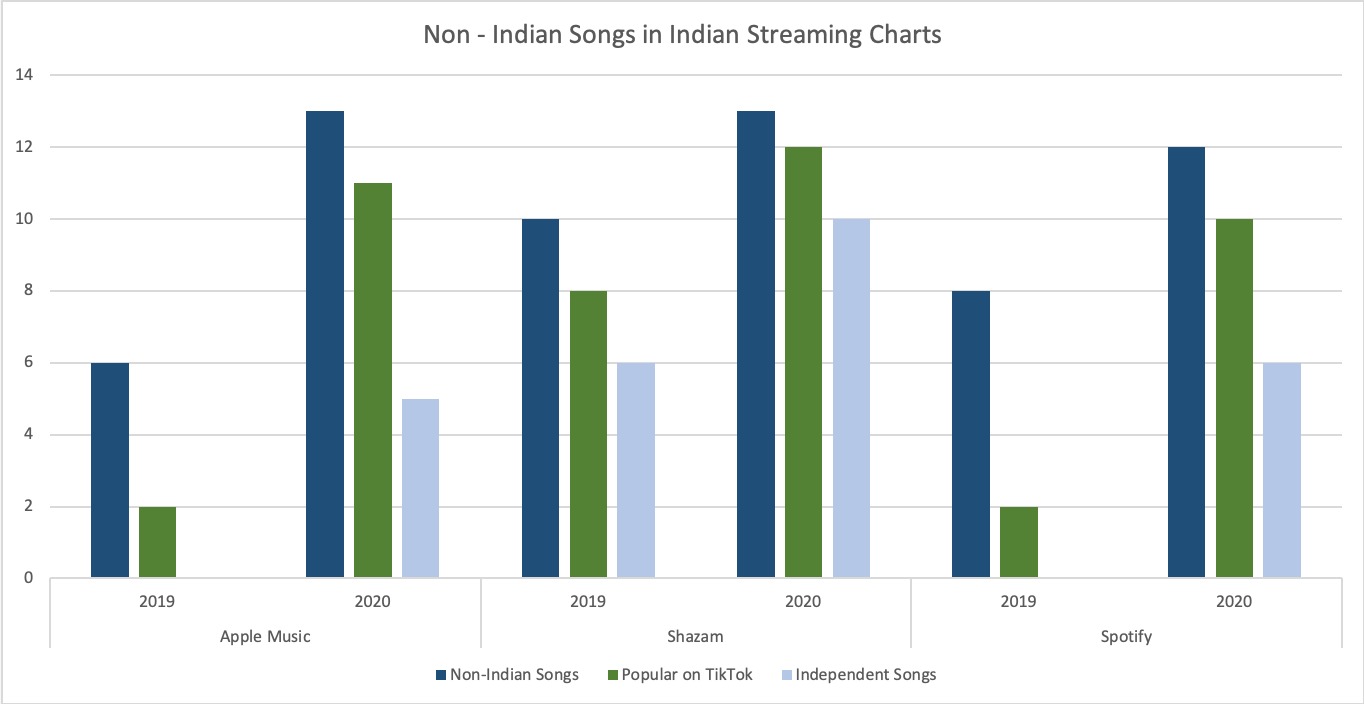 But what makes TikTok stand apart from other social networks and previous music discovery platforms? An effective algorithm designed to “make the user win” has led to the app achieving an engagement rate of 70%! TikTok also has a highly concentrated demographic that dictates the nature of content available on the app – over 60% of the users are under the age of 24. TikTok’s democratic nature gives everyone a chance to reach a large and global audience. Other streaming platforms and existing media networks support major labels and established artists through playlists, partnerships and organised marketing machinery. TikTok enables organic reach to a highly engaged audience.

While some argue that Gen-Z’s need for short-form video content can be met by Reels and other homegrown alternatives, it will be hard to match the success of TikTok in terms of user engagement. With these apps only serving India or select regions, it will also put Indian creators and users in a geographical silo, disconnected from global trends. With respect to music discovery, international emerging artists will probably not be concentrating on these platforms in the near future which is a loss for them as well as Indian audiences. How equitable and democratic these apps are will significantly impact independent Indian artists and that remains to be seen.

Whether you personally appreciate the songs that have gone viral on TikTok or not, the app created a new avenue for unsigned artists to global markets. It also helped established artists reach deeper into emerging markets like India. In an interconnected digital ecosystem, this also means access to both domestic and global markets for independent and regional Indian artists. YouTube and streaming may have unlocked the door for independent Indian artists, but Bollywood and the existing system still sit as the gatekeepers for scaling up continually excluding the non-Hindi speaking populations. It will be interesting to see how music discovery shapes up on Reels and homegrown apps racing to fill the void left behind by TikTok.

(Aranyaka is an artist development and marketing consultant currently based out of New York City. She has a Masters in Music Business from New York University and is passionate about the intersection of music, technology and culture. Views expressed are personal)