Despite little genome sequencing to conclusively say whether the variant is spreading in Pakistan, the spread hasn’t overwhelmed its healthcare infrastructure.

Delta variant of Sars_Cov_2 virus, which drove the second wave of Covid-19 killing thousands of people and creating an unprecedented health crisis in India, has been so far quite forgiving in Pakistan.

Considering the similarity in genetic make-up, behavioural pattern and environmental conditions between the two countries, the Delta variant’s submissive behaviour in Pakistan is inexplicable for many experts of infectious disease.

Pakistan has experienced three mild waves of Covid-19 since the virus was first detected in early March in the country. During the first wave, which continued from April 2020 to August 2020, the daily active cases touched the peak of 6533 on June 19.

The second wave started in late October 2020 and went on till February 2021 with a single day daily active case as 3261 on December 8. From early March 2021, the country witnessed a third wave which peaked with a single day-active case of 5694 infections on April 23.

The positivity rate has also come down in many areas like Karachi and Lahore from 20 per cent to 2 per cent.

At present, though daily active cases hover around 1100, it is slightly high from a low of about 850 cases per day almost a fortnight ago. 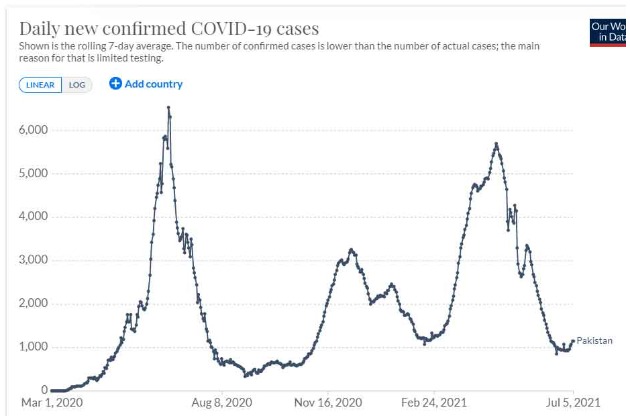 “We detected the Delta variant in early May. We think it had arrived from the Middle East and the UK when flights were open. However, the government implemented a strict lockdown in the early stages of the third wave. That did pay its dividends,” Dr Jehan said.

Pakistan, like India and Nepal, is doing very little genome sequencing to conclusively say whether the variant is spreading. However, the spread hasn’t overwhelmed the healthcare infrastructure which shows that the infection, even if going unreported, are mild and not a cause for serious concern.

Pakistan has submitted 294 virus samples through genome sequencing to GISAID out of which 24 are delta variants. It means the spread of the Delta variant is 9.64 per cent.  However, health experts say that based on data from other countries, it's quite possible that the Delta is the predominant variant in Pakistan right now.

“It is true that Delta variant was identified in Pakistan in May but generally sequencing rates in Pakistan have been extremely low and do not represent large geographic regions thus not reflective of the true burden of Delta variant,” Muhammad Imran Nisar, an epidemiologist and assistant professor at the Aga Khan University, said.

With the decrease in infection in the third wave, the government has relaxed lockdown norms in early June when shopping malls were finally opened to six days a week and in-person outdoor dining started. Schools have also opened with a hybrid model.

Dr Jehan says that a week before Eid in May the government closed down all non-essential businesses, tourism, schools, and travel across the country and the anticipatory management helped in curbing the third wave.

“If you see the trend, Pakistan has had the benefit of time. The waves in other countries of South Asia have always preceded the ones in Pakistan. This provides the government time to implement control measures,” Dr Jehan said.

Comparing the urban development in major cities in India and Pakistan, Dr Jehan is of the view that Pakistan does not have the sort of vertically built structures as India does, in its slum communities. “So, our cities, are less densely populated. That is also a reason for low spread,” she said.

“Having said that, it is too early to say that we are completely safe from the Delta Variant or what havoc it could potentially create. While testing rates are suboptimal, as is immunization (4% have received 1 dose), the vaccination is being scaled up rapidly,” She added.

Prof Dr Rabia Hussain, a noted expert on infectious disease and an elected Fellow of the Pakistan Academy of Science, agrees with Dr Jehan that early lockdown measures and the absence of a vertical real estate development have helped the country contain the virus to a great extent until now.

“I don’t have any scientific explanation on the submissive behaviour of the delta variant as of now in Pakistan but I can speculate to say that several factors might have worked,” Dr Hussain, who retired from Department of Pathology and Microbiology, the Aga Khan University in 2012, said.

“For instance, as we eat a lot of non-vegetarian food, that might have a positive impact on our immune system. Similar we still have BCG vaccines in place, that could have also worked in our favour. So there could be multiple factors,” she added.

Dr Nisar agrees that Pakistan's scenario is somewhat inexplicable. “Along with India's large dense population, its massive transportation system has played a big role in the spread of the disease,” he said.

He added, “Large election rally's and festivals drawing people from various parts of the country would have helped in a further spread when people returned to their rural or urban abodes.”

Locals say that after the beginning of the unlocking process in Pakistan, there is a complete violation of appropriate covid behaviour. Social distancing and wearing a mask in a public place are almost absent.

Health experts agree that the most infectious Delta variant is still present in certain pockets in the country and despite that, the spread of infection hasn’t spiked.

A section of Indian scientists believes that this tends to show the presence of some sort of natural herd immunity among people. Pakistan’s latest available seroprevalence survey, conducted in Nov 2020, supports this view.

According to Dr Jehan, the seroprevalence survey shows that 40 per cent population has already infected with one or the other variant of the Sars_Cov_2.

“I think the answer to submissive behaviour of delta variant in Pakistan lies here. If the seroprevalence survey in November shows that 40% of people were already infected, this number might have reached above 50% by the time Delta variant hit the country in May,” Gyaneshwar Chaubey, a professor of genetics at Varanasi's Banaras Hindu University (BHU), said.

“So, it suggests that the population is not so vulnerable in Pakistan and a majority of them have recovered from the earlier variants,” Prof Chaubey, who is carrying out a study on the Delta variant in Bangladesh, said.

“Pakistan has three major ancestry sharing regions. The first one is more like India, the second one is like Iranian and the third one is like Central Asian,” Prof Chaubey said.

He added, “And looking at the covid cases in these neighbouring regions it is clear that Covid susceptibility of Pakistani populations is more similar to Central Asian countries. It is also worthwhile to note that a chunk of central Asian ancestry is derived from East Asia which is also least affected with the Covid.”