Delhi Riots: Does Delhi Police Want To Steer Probe Towards A ‘Particular Direction’?

If Delhi Police has done its investigation without fear or favour, why does it want its own prosecutors? 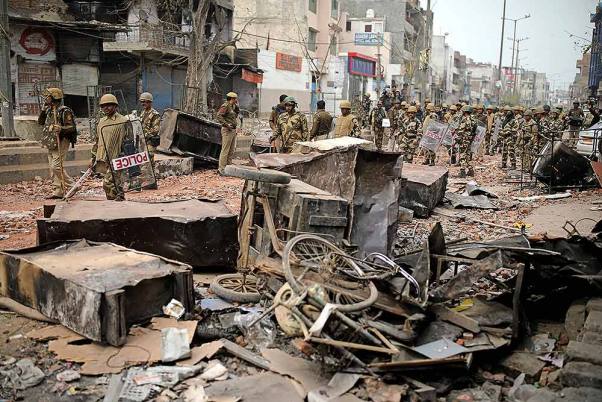 Successive governments in India, unlike in China, have been able to get away with a lot. From the Delhi riots of 1984 and the mass killings of 2002 in Gujarat to periodic communal violence and decades of state violence and repression in Jammu & Kashmir, India has escaped being put in the dock by the international community because it is seen as a democracy. In all these cases, it was assumed that rule of law and an independent judiciary would ensure that justice prevails.

That assumption is once again under question, this time because of the role of the Delhi Police during the northeast Delhi riots from February 23-25, 2020—which left at least 53 dead, a majority of them Muslims—and the investigation of the violence. The Delhi Police comes not under the Delhi government but the Centre’s Ministry of Home Affairs (MHA). Both Delhi Police and the MHA have often been at odds with the Delhi government, as they are in the present situation, too.

The communal violence of Feb 23-25 was the first large-scale riot in Delhi since the killing of Sikhs in 1984. It made headlines the world over as it raged when US President Donald Trump was on his first visit to India; and, Trump’s team as well as the international media covering the visit got an on-site grasp of a communal riot that raged for three days. Hence, the world media, particularly sections in the US, has been following with more than usual interest the investigation into the killings and prosecution of those involved.

Delhi Police, viewed as an elite force, is high profile and visible to the diplomatic community. Their role would attract closer scrutiny than, for example, the police in neighbouring Uttar Pradesh or Haryana. Equally watched in such situations, especially in India, is the role and performance of the judiciary as a free, fair and independent authority, not given to executive pressure.

In such a situation of riot investigation where things are not clear because so much is withheld from the public domain, perception is truth. And, Delhi Police is perceived to be doing everything to “manage” the investigation and dictate the course of the trial when it goes to court.

There have been reports pointing out that instead of pursuing the culprits, Delhi Police is going after the victims. It has linked the riots to the protests against the Citizenship Amendment Act (CAA) and implicated a number of young people especially Muslim women and prominent activists. There is a perceived bias against Muslim victims of the riots. No politician who incited mobs has been charged or arrested. As if all these are not biased enough, Hindutva outfits have been intervening with accusations of “false cases” against Hindus, thus making the police appear even more partisan.

The Delhi Police wants its own public prosecutors for the riot cases and the Lt Governor as the Centre’s agent is pushing for this. The Delhi government, which has not resisted the MHA and Delhi Police in the way they have gone about “investigating” the riots so far, is insisting on its prerogative to appoint the lawyers.

The Centre’s wanting its own lawyers appointed has raised questions of whether it is bent on driving the investigation in a particular direction with the aid of Delhi Police and its chosen prosecutors. This is a brazen violation of the principle of keeping the investigating force and the prosecutors independent of each other.

Delhi Chief Minister Arvind Kejriwal has weighed in on this issue against the Centre and Delhi Police in an interview to The Times of India. Asked about the motive behind the Centre, Delhi Police and the LG pushing for their choice of lawyers, Kejriwal said: “There is some problem in intent. In the last two cases, the court stated that the police want the investigation to be taken in a particular direction. Recently, the court said that they are taking the entire judiciary for a ride. If the courts have questioned the impartiality of the police, it is more important that the lawyers should be independent of the police.”

Also Read | Delhi Riots 2020: Who Fanned The Flames of Hatred? Is Kapil Mishra Only To Blame?

If Delhi Police has done its investigation without fear or favour, why does it want its own prosecutors?

It would be a travesty of the process of justice to drive the investigation and prosecution in a particular direction to fit in with a pre-written script. That would undermine faith in the justice system and not only at home. Global investors, particularly those looking at India as an alternative to China, may not be keen on a country where the rule of law and the judiciary are perceived to be captive to majoritarian impulses and open to executive influence.

That would negate the “global optimism towards India” emphasised by Prime Minister Narendra Modi in his keynote address at the India-Ideas summit on July 22 where he wanted US companies to invest in India. The market and economy, as observed by more than one eminent economist, cannot succeed in the absence of harmonious social and political conditions upheld by an independent justice system.