Of Time And The River…

The Osian Asian Film Festival, with a retrospective on the master's oeuvre, gives an opportunity to Delhi audience to experience the magic of his cinematic genius on the large screen. 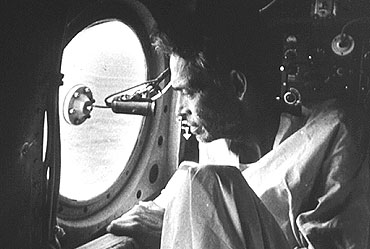 Ritwik Ghatak’s cinema vividly illustrates the idea that it is about the flow of time. It is memory that links his characters to themselves and others around them as they swim against the murderous tides of history and politics. Time and remembrance flow out of each other. Seldom has such a thought been expressed with greater feeling or perception than in the eight feature films Ghatak made between 1952 and ’74. 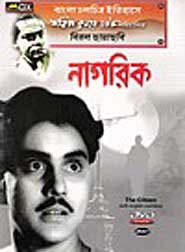 Nagarik (1952, released after his death in 1976) deals with mass displacement and people carrying memories of better days. The present - in Calcutta - is a constant struggle for dignity and increasingly elusive daily bread; the past evokes happier times spent in probably pastoral surrounding which are now a part of a newly formed country and hence out of bounds.

Nowhere in world history has there been such mass displacement of people from their native habitat as in the twentieth century. And India’s partition in 1947 saw the largest migration of a people ever. It is this sense of uprootedness and exile, of not quite belonging in a new found land and being spiritually nourished by humane values of another time and place that Ghatak evokes with unmatched passion and purity. 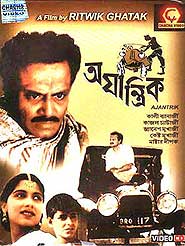 Ajantrik (1957) a film that does not bear the scars of partition, but recalls nevertheless, a lost world through the interaction of a mofussil taxi driver with tribals of the Chota Nagpur belt in erstwhile Bihar. He manages to create an enduring bond between nature, man and machine by discovering and sharing his knowledge of life’s fragility, and indeed perishability of all man-made objects and simultaneously transfiguring qualities present in myriad living phenomena. Bimal’s 1926 Chevrolet jalopy named Jaggadal (behemoth) often displays ‘human qualities’ and becomes ‘temperamental’ as it grows older. After years of reliable service, it breaks down and is sold off as junk. Life continues, Bimal becomes wiser despite his loss of livelihood.

There is lucidity in Ghatak’s cinematic vision that renders complex ideas simple. Early training in his gentleman-scholar father’s library reading the epics - namely Ramayana, Mahabharata, Puranas, Upanishads, Jatakas amongst others; and, soon after the writings of Marx, Engels and other western philosophers and a grounding in group theatre with Indian People’s Theatre Association (IPTA) - the cultural arm of the Communist Party of India - made him realize the value of communicating with very large audiences.

He, therefore, from his very beginnings in cinema eschewed the esoteric and the exotic. 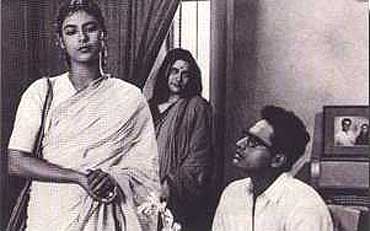 He grew up in the lush green countryside of what was once East Bengal where women were maternal, full-bodied as in the temple sculptures of India. Women in his film answered to this ideal. Nita, the nurturing mother figure in Meghe Dhaka Tara (1959) who saves a largely ungrateful family before succumbing to TB; Anusuya, the lonely upper class woman who finds herself through Brighu a popular actor in the mass theatre movement in Komal Gandhar (1961); Sita an unfortunate woman promising and bountiful as nature from Subarnarekha (1965); Basanti and Rajar Jhee from Titash Ekti Nadir Naam (1972) all represent the many aspects of matritva (or motherhood).

Unlike other film makers in the world espousing the Communist cause to whom religion was anathema and who took refuge in existentialism like Wajda and Godard, or a considered atheism like Eisenstein, political ideology and aesthetic expression were fused effortlessly in Ghatak’s cinema. Long before Fidel Castro discovered the virtues of non-interference with the religious beliefs of his party members in Communist Cuba, Ghatak had informed the Committee examining the ideological positions of IPTA and the CPI ‘song squad’ it would be imperative to remember that the Indian people, and certainly the proletariat who had been sustained culturally/spiritually by the epics would be best served if the party and its operatives read and appreciated these great books.

Characters in his films bear names like Ram, Sita, Anusuya, Nita, Brighu, Neelkantha from Hindu mythology. But his message is secular (worldly, but non-interfering in matters religious) and even revolutionary. He had taken to heart what an anonymous Communist had observed in despair: "they, (meaning the party leaders) had forgotten that revolutions were meant to bring happiness to the people". He was at loggerheads with the CPI for not understanding the needs, both spiritual and material, of the revolutionary masses and, after his expulsion from party ranks for allegedly being a Trotskyite made the sparkling serio-comedy Komal Gandhar in an effort to understand the malaise.

Unlike Jean Paul Sartre who spoke only of an individual’s accountability to himself for his conduct, for society only caused derailments and hence alienation, Ghatak felt a human being always had to be socially responsible. A scene from Subarnarekha exemplified this idea. Ishwar Chakravarty leaves Nabajiban colony for a more economically stable life with his little sister and another foundling and is accused by his old friend Harabilash - a schoolteacher - of being a coward for leaving behind his fellow victims of the partition to an existence of deprivation and despair. 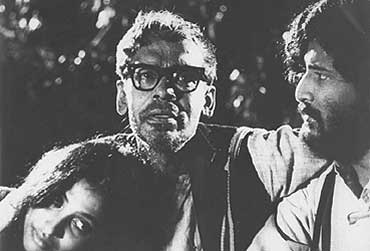 Jukti, Takko Aar Goppo (1971-74) his last will and testament, made as he was dying by degrees, found Ghatak examining the same idea in a slightly different light. Neelkantha Bagchi, a derelict intellectual, in conversation with a young ultra-left Naxalite observes how soon after the Independence he witnessed intellectual after intellectual turned cowardly just for the sake of material gain.

What makes Ghatak truly unusual is his commitment to - social responsibility, romantic love, nature rejuvenating itself despite man’s (insensate) intervention, each succeeding generation transforming itself yet retaining its ties invisibly with the past. These ideas are often expressed singly or in unison in his penultimate masterpiece Titash Ekti Nadir Naam filmed soon after the formation of Bangladesh.

Basanti, who brings up the son of her now deranged childhood sweetheart Kishore, chooses not to remember, having tasted pain in love and in everyday existence. She rescues Rajar Jhee, the woman Kishore married on one of his fishing trips years ago, from the queries of a prying village panchayat (local self-government). Rajar Jhee cannot remember - despite her best efforts - her supposedly lost husband Kishore's village having travelled over water in search of him for several years with her son.

Ultimately, Ghatak’s cinematic journey is about remembering, forgetting, traveling, savouring life across the landscape of experience. It is also about illuminating moments of which the truly giving can be a part.