No Time For Grieving

Or why we should talk some more about Kai Po Che 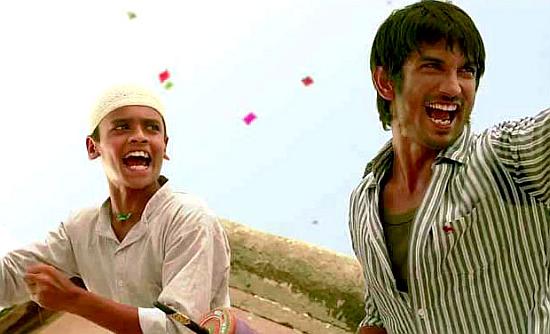 Okay, so the popular consensus is that Kai Po Che is a good film. Everyone agrees that it’s well shot and edited, the relatively unknown heroes are excellent, and the narrative is taut and emotionally resonant. It is competent and follows all the right cues worthy of a buddy movie about growing up and testing loyalties. But the film is hardly an event. It has been seized upon as a significant cinematic landmark for its depiction of the Gujarat pogrom of 2002. It might be worth our while to get some perspective here.

Today I will look at some questions about our collective liberal response to this film, and what it indicates about our attitude to select incidents of mass violence in this country. The main question to ponder is whether there is something dangerous about a historically-contextualized cultural product that can be co-opted by a range of political perspectives? Is there something objectionable about a film (and the emotions it generates) which is deliberately toothless in the face of power? Over the last few weeks we have witnessed a range of informed cultural commentators protest that critics of the film are making much to-do about what is in fact the first “realistic” and engaging Bollywood depiction of the Gujarat massacre. This post rejects that opinion and appeals for responsible film criticism and an alert, active mode of spectatorship.

What really happened in Gujarat in 2002? The propaganda narrative simplistically maintains that the burning of a train in Godhra, combined with a history of communal violence in Gujarat, led to a large-scale eruption of misplaced anger. We’ve seen that before in this subcontinent. Over and over. We are outraged each time it happens and then we shake our heads and say that the fury of the mob is irrational. But this view is a gross, unethical misrepresentation of the event. (See this article for an analysis of how KPC waters down the pogrom for easy assimilation. Also Paul Brass for a theoretical analysis of how the category “Hindu-Muslim riots” is produced.)

Contradicting this propaganda are academics, NGOs, lawyers, and journalists who have published studies that prove that the Gujarat “riots” were systematic, large-scale, aided by government lists and electoral rolls and university attendance charts. The police stood by and watched. Those gheraoed and murdered inside their homes in broad daylight included a former Member of Parliament. Women were brutally raped and tortured in ways that boggle the mind. Such an event could not take place without the sanction of the state. The Chief Minister at the time, a man who clearly has blood on his hands, and mud on his face, is preparing to become Prime Minister of this righteous republic. He has admitted recently that some “mistakes” were made in the past but the reasonable citizens of this nation will surely forgive him. That so many of us have also apparently forgiven and forgotten is scary to me.

Kai Po Che ably addresses the propaganda narrative of the genocide. Farhana Ibrahim points out that the earthquake section reveals a gradual build-up of motivated communal tension. And yet, this does nothing except set the stage for the Godhra-inspired "flare-up" that is to follow. The real character of the violence, that it was a state-sanctioned systematic purging of a community, is none of the film’s concern. Apart from some meagre references to newly-minted swords and a call to the police that doesn’t go through, KPC simply doesn’t want to deal with the facts. You will say, but yaar, it is a fiction film not a documentary. At least the director has shown the communal politics in an honest way. What more can you expect of a mainstream movie? I will say, yes, you are partially right. It’s done a decent job but it is not honest and there are insidious messages and meta-commentaries that ultimately do more harm than good. There is a gaping wound bang in the centre of the plot. What happened in that Sabarmati train coach? Two state-appointed fact-finding commissions were instituted (Nanavati-Mehta Commission, 2002; U.C. Bannerjee Committee, 2004) to get to the root of the matter. Both, ironically, had contradictory findings. The matter is still under dispute. KPC, however, uses a remarkable sleight of hand to endorse the Muslim-conspiracy version of the incident. We see the fundamentalist Mamaji say that “the Hindus” will not tolerate such an atrocity, meaning that the train was torched by Muslim extremists. Next, Omi’s friends come to take him home, sensing that matters are going to get out of hand. He turns to them and says, “You mother hasn’t died, has she?” and the friends are silenced. It is the friends’ silence, dramatically astute though it may be, that rankles. That is the terrible silence at the heart of the film, a refusal to complicate the causality narrative. The film just lets the question slide. This is what they call the moment of “prestige” in a magician’s vocabulary. Causality has been established and you didn’t even see it. Magic.

There is another magic trick that we in India are fond of. It revolves around converting an outrageous crime into a tragedy. We have short-term memory loss when it comes to perpetrators and state actors. Besides, we have zero memory of anger or a need for justice. KPC delivers this exact-same discourse of mourning and anguish. A recent review by Trisha Gupta articulates this admiringly, “If Kai Po Che's segregated universe has a message for us, it is not to applaud the fractured society it mirrors. It is to force us to see what exists— and grieve for how it came to be.”  That’s cute. A nation that grieves together stays together. Let’s try two more pithy aphorisms and see if they make sense: A tragedy heals itself with time. An outrage needs redressal.

Gupta also suggests another argument in favour of KPC: “It also seems clear to me that this film is more effective in reaching out to its audience—and potentially changing people's minds—than an imagined filmic naming and shaming of Modi could ever be.” Is there something patronizing about this position? Every person who iterates this view is subtly distancing herself from KPC’s ideal “audience”. Because, of course, we don’t need any mind-changing. We refer to a nebulous great Indian middle-class - young bankers, older housewives, middle-aged engineers - which will vote for NarendraModi in the coming elections. But are these constituencies really so mindless? All the film says is that rash acts of violence are bad; stick with your friends; don’t be swayed by evil politicians. Who wouldn’t agree with that? On the other hand, if the film convinced you that there are minoritized sections in our country that have been historically oppressed and we, the protagonists, reap the benefits of this oppression; or if the film changed your mind about Modi, showed you that sometimes “development” comes at a price that we might not want to pay, then we’d have something to celebrate. But commercial cinema rarely works like that, so please, hold your applause. Kai Po Che is, as a dear comrade put it, a children’s film on Gujarat. If adults cheer it on, it’s time to stop and wonder.

Remember how we were all livid when that Farhan Akhtar advertisement came out? The one that exhorted all men to “be men” and protect women from sexual harassment? Remember how you forwarded Kavita Krishnan’s link to your friends on facebook and said wow, this girl has nailed it? What was the problem with that advert? It’s heart was in the right place, it was well-intentioned, in a world full of misogynists it was telling men to be sensitive to women. Nevertheless, we were offended because we are sophisticated feminists and we know that such an exhortation belongs firmly within the realm of patriarchy, a sexist approach that hinges on male power and female lack of agency. Then why do we not react with equal nuance when something similar but more blatant is happening in KPC? (For a discussion of KPC’s representation of Muslim victims and Hindu heroes see this )

In the same Kafila post, Ibrahim responds to criticism that KPC leaves out many important facets of the Gujarat violence by asking: “are the[se] the only ways in which we can memorialize the events of 2002 and after?” No, these are not. We have precedents like Final Solution, Firaq, and Parzania. So let there be a Kai Po Che too. And may there be other, braver, more honest films in the future. We can only start to collectively address a recent trauma through a multiplicity of narratives. Coming back to the question of cinematic memorialisation, what are some precedents for the fictional treatment of traumatic historical events? We’re familiar with the commercially viable Hollywood holocaust genre, an aesthetically settled form that directly confronted the post-WW2 ‘radical unrepresentability thesis’ of the Jewish holocaust. The crucial point is that the holocaust genre and its cathartic melodrama had some advantages that we don’t have for the representation of our own sub-continental genocides. For one, our histories are grossly unsettled. There has been no naming of perpetrators or extended trials. We don’t pass bills that recommend punishment for “command responsibility”. Our mass murderers sit in Parliament and are dispersed across every political party. Two, there are many “facts” and representational tactics in the holocaust genre that were sacred in its first decades. The genre didn’t come into its own till the 1960s, a good two decades after the large-scale Nazi persecution of Jews. It took an even longer time for Hollywood to attempt a good German protagonist. And even as recently as 2010, there was outrage at Quentin Tarantino’s fabulist historiography in Inglorious Basterds, a vengeful fairytale that still maintains the appropriate distance between the good guys and the bad guys. In India, where there has been scant cinematic examination of even the Partition, we somehow feel grateful for any Bollywood crumbs that are thrown our way.

SnigdhaPoonam has quoted Cheta Bhagat as saying “The film depicts the riots in full detail; it just doesn’t take sides. I am still the only writer who has engaged with Gujarat riots.”  He also said in an interview with the Indian Express, “Nobody can deny what has happened in Gujarat. Why and how has it happened that really is an opinion. And that the film doesn’t have.” This statement holds the key to my reading of the film and the weakly complicit responses to it. For example, Anupama Chopra tells us that compared to the book, the film “is far more comforting and palatable. But perhaps that is not such a bad thing,” that as a cinematic experience it is “deeply satisfying,” and finally, “Great horrors unfold and yet, when the deeds are done, a sense of redemption remains.” More appalling words have rarely been printed.

None of us will accept a film about the Delhi gangrape which has “no opinion”, which “doesn’t take sides”. Allow me to take an intentionally vulgar liberty and imagine that film. There are three friends who live in Delhi. They are working class guys with ambitions for the future and some hardened cynicism about the city. They have personal crises and endearing character traits. One day something terrible happens in the life of one of the friends. He gets unrecognizably drunk and his friends are shocked by his murderous rage. They try to calm him down. They borrow a friend’s chartered bus and go for a spin around the city.

Is this scenario already making you uncomfortable? Is there any way I can make a girl’s rape-murder seem like a tragic fallout to you – instead of an outrageous event that must be addressed now? But I assure you, that film will be made. And we will walk out of the theatres with our popcorn tubs empty and our hearts full.

This was first published at Phar'aat

No Redemption Without Justice