With eyes on upcoming assembly polls, cabinet reshuffle in favour of big states 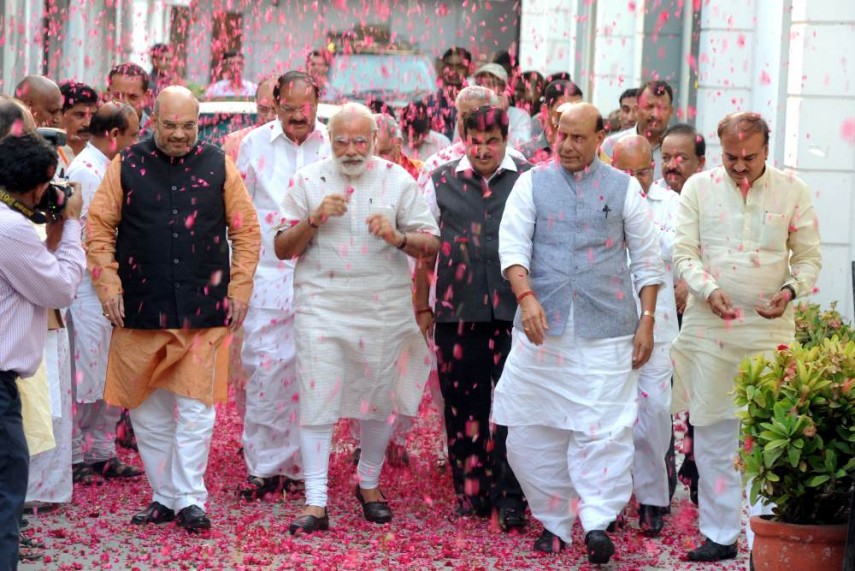 Closer to crucial assembly elections due next year, Prime Minister Narendra Modi’s second cabinet reshuffle since he took over in 2014 is more practical than substantive. With no major changes since the rejig doesn’t reflect any major policy change.

With BJP president Amit Shah and Modi’s eye fixed on the upcoming assembly polls and, more importantly, the 2019 Lok Sabha elections, Modi’s new cabinet now has given preferential treatment to big states — 15 ministers from Uttar Pradesh, eight from Bihar, seven from Madhya Pradesh, six each from Gujarat, Maharashtra and Rajasthan, four each to Andhra Pradesh and Chhattisgarh.

If we see the caste equations, there are 47 representations from the general category, many are Brahmins, 13 OBC, eight from the Scheduled Castes and five from the Scheduled Tribes. The Shah-Modi-Jaitley troika has kept the party happy by giving portfolios to 69 of its MPs (56 Lok Sabha and 20 Rajya Sabha) but has failed to enthuse the allies. Except Chandrababu Naidu’s TDP who has two ministers, others have just one.

The shocker in the reshuffle was the replacement of HRD Minister Smriti Irani with Prakash Javadekar, who many strongly feel had goofed up as an environment minister by diluting norms and helping corporate houses. Where controversial Irani became a major block in implementing government’s agenda, Javadekar will perhaps be more pliable.

Even new faces like MJ Akbar as Minister of State for External Affairs is something like when Omar Abdullah was made MoS External Affairs in the Vajpayee regime to show a token Muslim face. “But, if the government feels that he can be close to the Muslim countries, will he be able to change relations with Israel? Is it practical? Besides, it is to be seen how do Jaishankar and Akbar get along because both are professionals. I don’t see any excitement in this reshuffle which produces more question marks,” says sociologist and political thinker Shiv Visvanathan.

Visvanathan doesn’t see any major change in policy in this reshuffle, like the decision on RBI Governor Raghuram Rajan was a major policy decision which will have “more impact”. He says, “The rejig is like musical chairs with only chairs and bad music.”

The other shocker was the shifting of Jayant Sinha from Finance to Aviation. According to a political observer, Sinha was most likely out of favour for speaking out of turn. But unlike VK Singh, who also spoke out of turn and created controversy, Sinha maintained “decorum and debate while following the norms. Many used to feel that he is the future finance minister”.

Surprisingly, Ravi Shankar Prasad, who was shifted from the Law Ministry to IT in first reshuffle, has now been shifted back. So what is the criteria of selection?

With no future policy change and the only focus being on elections and social engineering, it appears the BJP is going the Congress way of only attempting to harness the weaker sections.