The going rate to clear an unpaid 'nil' bill, if I recall correctly, was Rs 100 in non-receipted cash in an age when you could rent a three-bedroom house in Defence Colony for all of Rs 1,000.

When our tenant vacated the first floor of our Defence Colony house in 1992, he settled all dues, barring a messy bill built up by the then reigning deity called Delhi Electricity Supply Undertaking (DESU).

Back then, the bills came in our name and were paid by the tenant in cash. Often, the bills sent were ‘provisional’—based on average consumption—so, over the months, our tenant had paid DESU for more power than he had consumed. Once, while he was out of town for some months, DESU sent him a ‘nil’ bill—essentially zero charges to balance out the excess money he had paid. 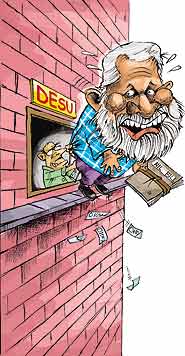 Nil bill it was but DESU expected you to pay it. In other words, you would still have to go through the rigmarole of visiting the DESU office, standing in a long line, getting the bill franked for zero amount with revenue stamp and signature and rubber stamp and all that jazz...The going rate to clear an unpaid ‘nil’ bill, if I recall correctly, was Rs 100 in non-receipted cash in an age when you could rent a three-bedroom house in Defence Colony for all of Rs 1,000.

In Delhi on leave from the Merchant Navy, and full of freshly commissioned righteous indignation that went with wearing a uniform in those days, I refused to part with a Rs 100 note to the representative of the presiding deity at DESU’s Nizamuddin office. The bills thereafter started coming with interest and charges on unpaid arrears of ‘nil’ rupees, which I refused to pay under the impression that any interest on ‘nil’ would be nil, right? Wrong. The Nizamuddin office of DESU knew how to put a value on the ‘nil’ by way of some fixed charges. Once that came into the system, the interest started compounding itself with relentless logic.

At some point in between, when the amount reached Rs 28,000, I got fed up with the whole show and sent a cheque for the overdue amount. The goblins at DESU swallowed the cheque but still kept adding the ‘overdue’ amount. Everything else has changed since, except the Nizamuddin office. DESU became DVB, which then became TransCo, which further evolved into BSES-Rajdhani. And I have a file as thick as my wrist on the nil bill. A few months ago, all my letter writing with photocopies of past correspondence attached finally seemed to work, and I got a bill that cancelled those arrears. I happily paid the non-arrears amount, by cheque, and threw a small party. End of the matter?

Some weeks ago, on a Saturday afternoon, a thuggish man with a twin, let us call them T-1 and T-2, rang the doorbell and demanded access to our electricity meter. I said OK, and they went ahead, glanced at the meter in passing, and came back to me. At this point I got suspicious, and manoeuvred T-1 and T-2 towards the exit. T-2, the more loutish of the two, then came out with it: he said he was an ex-DESU lineman from a "recovery company", now hired by BSES. And they wished to collect a fairly sizeable sum of money, say around 30 per cent, otherwise the cancelled arrears would get un-cancelled. T-1 backed this demand with a wave of some typed papers showing other names and addresses in Defence Colony. When I said I would keep their identity cards, they showed me a fistful more. I said I would call the BSES vigilance number, and they offered me their mobile phone, saying the number was always busy anyway. The choice was clear—pay 30 per cent in cash there and then, or get back into the un-cancelled arrears loop.

Some things never change. I think it is back to Nizamuddin now, with letters, all over again.