James' performance was not enough as defending NBA champions the Los Angeles Lakers lost 114-104 at home to the Phoenix Suns. 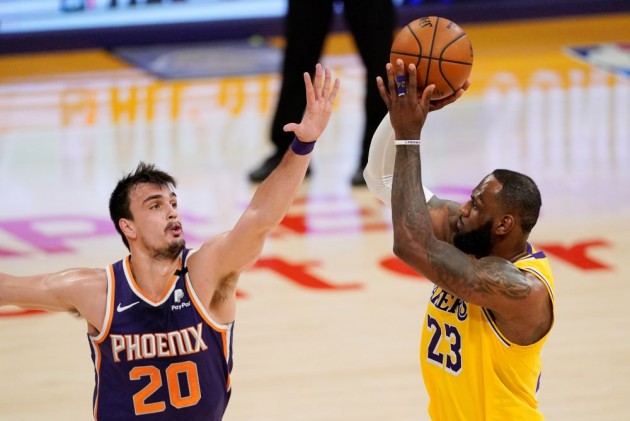 James posted a game-high 38 points, but the Lakers still went down to the Suns, who ended the team's run of back-to-back wins on Tuesday.

The Lakers had won 10 of their last 12 games against Phoenix – including sweeping the season series 3-0 last term – but a season-high 21 points from Dario Saric off the bench gave the Suns a rare victory.

Aside from Dennis Schroder (17 points), Talen Horton-Tucker (16 points) and Markieff Morris (12 points), James did not have much support as the Lakers continue to play without injured star Anthony Davis.

With the result, Phoenix extended their winning streak to three games.

Bradley Beal became the fastest player to reach 1,000 points in a season in Washington Wizards history – his 31st game of the campaign, surpassing the 33-game record held by Gilbert Arenas (2006-07) and Bernard King (1990-91). Wizards star Beal had 23 points in Washington's 125-111 loss to the Memphis Grizzlies. Memphis' Ja Morant went off for 35 points and 10 rebounds.

Nikola Jokic produced another masterclass to inspire the Denver Nuggets' 128-97 rout of the Milwaukee Bucks. Jokic put up 37 points, 11 assists and 10 rebounds for his ninth triple-double of the season and 50th of his career – the third-fastest player to the half-century mark in NBA history. A 27-point performance from two-time reigning MVP Giannis Antetokounmpo was not enough to prevent the Bucks from having their five-game winning streak snapped.

Paul George stepped up in the absence of injured team-mate Kawhi Leonard with a game-high 32 points, but the Los Angeles Clippers still lost 117-112 to the Boston Celtics.

It was a forgettable outing for the Heat in Miami. Their six-game winning streak ended abruptly on the back of a woeful shooting display. Miami shot just 37 per cent from the field, while they were only 27.3 per cent from three-point range. Tyler Herro was three-of-12 shooting as he converted just three of seven attempts from beyond the arc.

There was no way past James as he denied Phoenix's Deandre Ayton at the rim in the second quarter on Tuesday.

LeBron protects the paint in #PhantomCam.

The NBA-leading Utah Jazz (27-8) will travel to face Eastern Conference pacesetters the Philadelphia 76ers (23-12) in a blockbuster showdown on Wednesday. Both teams are coming off losses.