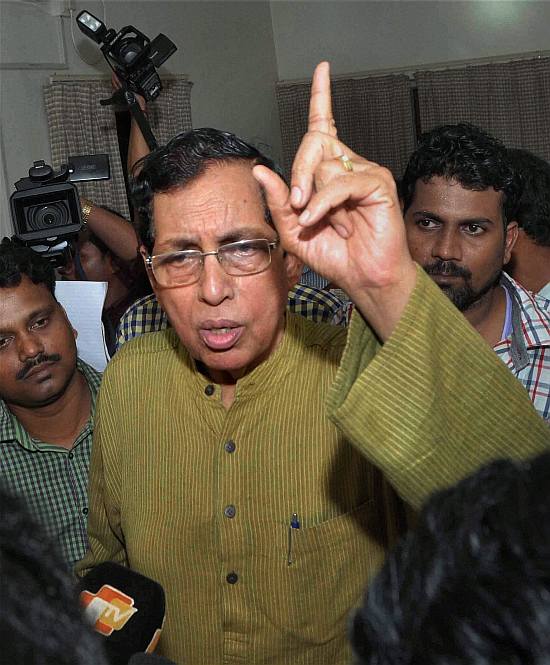 Once Naveen Patnaik’s closest advisor, BJD Rajya Sabha MP Pyarimohan Mohapatra poses the biggest challenge to his authority today. He was earlier accused of being behind a “coup” attempt to take over the party in May earlier this year. Having launched Orissa Jana Morcha, a grouping within the BJD that held its first rally on October 28, he is now calling on Patnaik to adhere to the party’s constitution and give up being the party’s president. Excerpts from an interview conducted days before he was expelled from the party on Friday, November 16:

What exactly is the Orissa Jana Morcha?

You can call it an expanding pressure group within the BJD to make it functional and democratic, to rid the party of people not acting according to the party constitution. What I am doing is a takeover of the party by democratic forces. I am trying to recruit party workers under this umbrella so that there is a rethinking to adhere to the constitution.

Why didn’t you invite Naveen Patnaik to OJM’s first rally?

What are the reasons for differences between the two of you?

He has held the party structure in contempt and still does. He refuses to function and treats the party like chattels. He does not have the willpower to shake off his indolence. Party amendments had given him the right to create a political affairs committee and name six of its members. The committee was to decide on electoral tickets. He was also supposed to create a disciplinary committee that was to have powers to suspend. If he had the slightest commitment to the party constitution, why did he shy away from creating these two? He is behaving like a dictator, arrogating all the powers of the party onto himself.

Are there attempts to somehow get rid of you?

Given my role in ensuring electoral victories, especially in choosing the MLAs who won, some within the BJD felt that I could take over the party. They started spreading rumours that I had siphoned away party funds. The conspiracy was drawn in Delhi by six people—Baijayant Panda, Ashok Panda, A.U. Singh Deo and the three siblings (a reference to the Patnaik siblings).  They thought—“Buddha ko nikalo by December.”

Why did you not speak of all the problems within the party earlier when you were on the right side of the CM?

I did back in January 2010, when he was elected as the party president. When others praised him sky-high, I pointed out three concerns—how corruption was increasing at the grassroots, how the party was moving away from its manifesto and why we had to bring back ministers to the top, not bureaucrats, as far as governance is concerned. He thought I had no business bringing these things up. This was beginning when I raised my concerns in public for the first time at a state council meeting. Had he not come out of the house and started shouting, I would have neither. I was making continuous efforts to bring this gentleman on the rails, telling him to take interest in work but work was anathema to him.

I am no longer certain given some recent revelations. Allotment of one coal block was cancelled and it was given to the Jindals in an autocratic streak. There is also talk that some shares of Sainik Mining (a firm that had entered into a controversial JV with Orissa Mining Corporation) were given to some people at the top.

What is 2014, the year when both general and state elections are due, going to be like for the BJD?

I see a bright future. I see the party cleansed of all undesirable, undemocratic elements. It will be a stronger and more united party.

Not of Patnaik himself, but of Patnaik as the party president. He has become such a non functional president that he should not stay on for even a single day. He has stayed on for too long without any authority.

How do you expect him to give up so easily?

By making the organisation stronger and stronger…

At some point you have to negotiate with him?

No way. He will find the seat too hot and will give up in favour of somebody else, someone who works and works hard. Patnaik is not used to any hard work. As the state’s CM, he signs papers without even reading them. His bureaucrats are running the state.

Are you going to form a separate political party?

I see no possibility of that currently. I will make an honest attempt… I have given 12-14 hours daily of my last 12 years to the BJD. It is no small thing.