What should we infer from the visit by three junior lawmakers of the USA? Particularly when one of them represents all the qualities that Modi is trying to distance himself from? 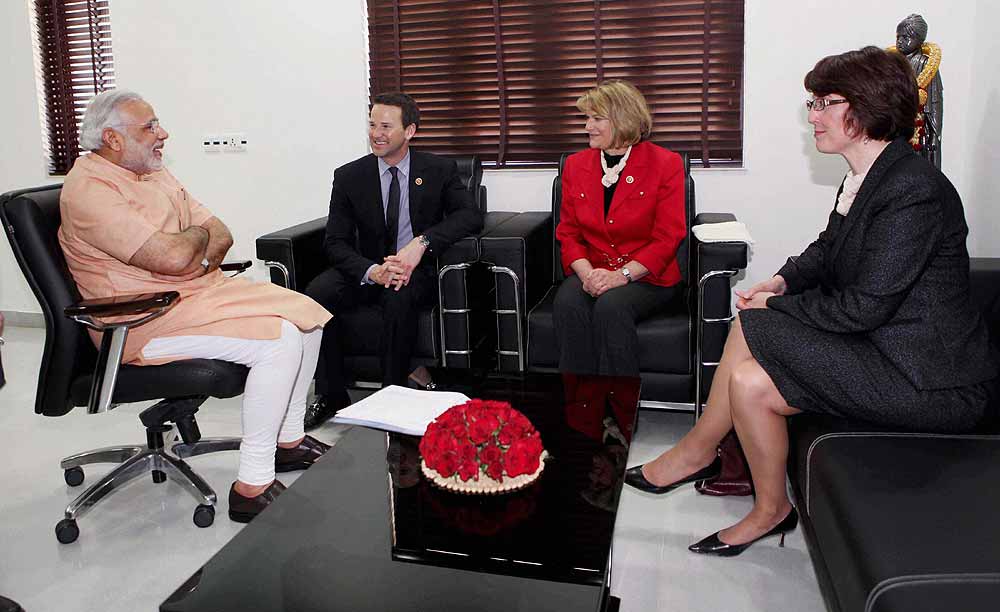 The Business Standard in an article posted a few minutes earlier, at 4:57pm, wrote: “After UK, now US softens stand on Modi.”

Indeed three members of the US Congress, along with a few US business leaders, did meet with the Gujarat Chief Minister today in Gujarat. But should we infer any shift in US policy towards Narendra Modi?  In short, no.

From 2009 to 2011, I worked in the US House of Representatives as a senior foreign policy aide where I often organized the overseas trips for a member of Congress. The Congressional calendar is divided broadly in two categories: days when there are votes on the House floor and recess days—which members of Congress can spend in their home districts, or at political fundraisers in other parts of the US, or in countries they deem relevant to their legislative work and/or constituents. Each of these trips have to be approved by the House, especially where public funds are used.

Consider this: in June 2011, (now former) Congressman Dennis Kucinich, a Democrat, made a highly controversial and criticized trip to Syria where he met with met with disgraced Syrian president Bashar al-Assad. The US State Department distanced itself from Kucinich by saying that “(Kucinich) did not ask to be accompanied on his meetings, nor has he given us a debrief, nor was he carrying any administration messages.”

But here again is the point: members of Congress are free to do as they like, within the House Ethics parameters and US law, because they do not represent the ruling administration.

If the US is signalling a change in its policy towards Modi, it would send a representative of the Obama administration—likely a State Department official—to meet with Modi, not three junior Republican members of the House of Representatives, a body that plays third fiddle in the hierarchy of US foreign policy behind the Administration and the US Senate.

The visit by the junior lawmakers should not be read for something it is not: a sign that the US government has changed its views on Modi. Ultimately if the US is to grant a visa to Modi, this policy shift would have to come from the White House itself, in accordance with a rethinking of how the International Religious Freedom Act of 1998 can be re-examined to permit Modi’s entry. As of yet, the White House has not given any indication of a shift in its policy.

That said, the visit and Schock and his group remains significant because it shows that more US lawmakers are willing to meet with Modi, despite the US State Department’s ban on Modi for his role in the 2002 Gujarat riots. Schock’s visit is also interesting for another reason: it shows the strange bedfellows Modi supporters are making in the US, many of whom are far right of centre.

When Modi won a third term, it was Schock who stood up on the House Floor to praise Modi. But today Modi might not want to be seen too close to him: Schock faces a House Ethics Investigation for misuse of funds. According to his home state paper, the Chicago Tribune, a Congressional investigatory panel voted 6-0 to investigate Schock on the grounds that “there is substantial reason to believe that Rep. Schock violated federal law, House rules and standards of conduct.” At the heart of the issue is whether Schock solicited donations of over $5,000 for his political action committee in violation of US campaign laws.

Schock is not the only scandal prone member of Congress to support Modi. In the last Congress, the most vocal supporter of Modi was disgraced Congressman Joe Walsh (Republican—Illinois).

Walsh’s two years in Congress were marked by revelations that he owes $117,000 USD in child support. Likewise his policy positions earned him criticism from even his own support base. Walsh is skeptical of global warming, for example, and has said the science on the issue is “not definitive.” When asked about securing America’s borders, Walsh said the US should install medieval style moats with alligators at the US-Mexico border. When a Chicago mosque was shot at in August 2012 with a pellet gun, Walsh stood at a spot just 15 miles away from the mosque and said radical Muslims are “trying to kill Americans every week.”

Last year, Walsh wrote a letter to then Secretary of State Hillary Clinton to grant Modi a visa for his work in “establishing Gujarat as the most business-friendly state in India.” He added in the letter that “(Modi) is widely believed to be a serious contender for the 2014 election for Indian Prime Minister.” (The State Department responded by saying there was no change in official US policy towards Modi.)

Supporting Walsh was the Indian Americans For Freedom, a group whose goal is “individual liberty, free enterprise, freedom from bureaucrat ‘babus.’” On the top of the website the IAFF lists its two inspirations as Ronald Reagan and John F. Kennedy and the website includes a collection of videos, including one entitled “Joe Walsh will always tell you the Truth. Radical Islam is a threat to All!!” One of the videos on their website makes an allegation that Tammy Duckworth, a disabled US war veteran who eventually defeated Walsh in the election, is a supporter of the US terror listed group HAMAS.

But those who think Walsh was defeated because of his support of Modi are being too generous to Modi’s opponents. It was Walsh’s own incompetence, coupled with the videos of him yelling at his own female voters, that convinced his own base to turn on him.

Indeed after Walsh’s loss, even supporters of Walsh tried to save face. Dr. Bharat Berai (who recently met with Modi as part of a Jewish delegation) said, “Walsh’s opposition was against radicals in the Islamic community. His loss in the election has nothing to do with his stand on Chief Minister Modi’s visa.”

What is fascinating about today’s meeting with Modi is that the Congressional delegation was joined by the National Indian American Public Policy Institute, a group whose founder’s page is a direct copy and paste from the Indian Americans for Freedom (IAFF). The National Indian American Public Policy Institute might be different from the IAFF, the group that accused Walsh’s challenger of being a HAMAS supporter, but from the looks of the two websites, there appears to be overlap in the organizations’ leadership.

Either way, neither of these groups seemed skilled in policy advocacy or effective messaging.

So what then does today’s meeting with Modi mean? It is too early to tell. Will other, more respected (and more ranking) members of Congress also follow suit, especially from Obama’s Democratic party? If so, then perhaps we could be witnessing a strong push on the US State Department to lift the US visa ban on Modi.

As of now, Modi’s supporter in the US have attracted mostly fringe elements of the US political establishment.

Which begs the question: if Modi’s supporters in the US want to reshape Modi’s image, why then align with a candidate like Walsh who represents all the qualities—intolerance, misogyny, fiscal irresponsibility—that Modi is trying to distance himself from?

Zahir Janmohamed is based in Juhapura in Ahmedabad.