The official handle of the Vice President of India tweeted 'M', possibly inadvertently, capturing the imagination of twitter users, nevertheless. 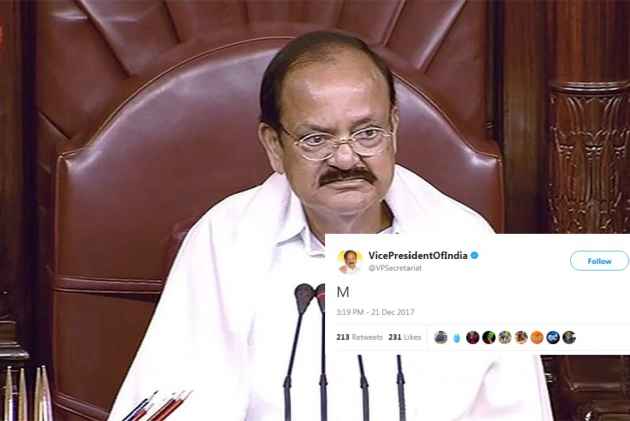 What did Venkaiah Naidu mean when he tweeted an 'M'- was it 'Mitroo', 'Modi', or 'Manmohan'- Twitter users have some suggestions.

The official handle of the Vice President of India tweeted 'M', possibly inadvertently, capturing the imagination of twitter users, nevertheless.

The tweet is another example of Donald Trump's 'covfefe' moment. US President Trump's incomplete, misspelled tweet in May this year read, "Despite the constant negative press covfefe." The tweet went viral with users from around the world attempting to define it in their own terms.

Naidu's tweet unleashed a torrent of reactions from Twitter users, who tried to decipher what the alphabet meant. In October this year, it was Arun Jaitley's tweet that went viral for similar reason.

The Finance Ministry's Twitter handle had replied to a News18 article posted on October 18 titled 'One apprehended in Delhi for selling crackers to people secretly'. It chose to reply to the handle with two tweets. One read "Sawa we h we s see see" and the other said "Ess".