Two Indians among eight doctors held in Britain and Australia in connection with last week's failed terror attack in the UK as the hunt for conspirators intensifies across the globe. 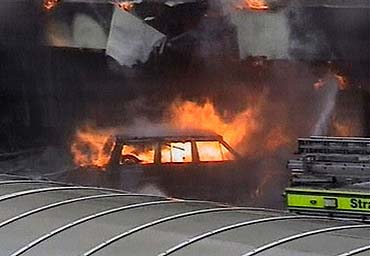 The Police authorities of Glasgow and London have so far taken into custody seven persons in connection with their investigation into the two failed terrorist attempts at London on June 28/29,2007, and the partially successful attempt at the Glasgow airport on June 30,2007. In order to prevent any backlash against members of the Muslim community in Scotland, the British authorities have been stressing that the persons detained or suspected so far are not home-grown Muslims, but Muslims of foreign nationalities, who had recently come to work in British hospitals.

On a tip-off by the British Police, the Brisbane Police detained on July 2, 2007, a 27-year-old Muslim doctor, described by Australian Prime Minister John Howard as an Indian national with a temporary visa at the Brisbane airport as he was trying to fly out of the country to India. According to Mr.Howard, the detained Indian national was working as a Registrar at the Gold Coast Hospital in Southport, Queensland. Another doctor of unknown nationality was being questioned. It has been reported that both the doctors were earlier working in Liverpool in the UK from where they got their jobs in Australia in response to an advertisement.

Of the seven persons detained in the UK, the British Police have so far indicated or leaked out the identities of only three. One of the arrested men, a junior doctor, has been named as Bilal Talal Abdul Samad Abdulla who is said to have completed his medical training in Baghdad and to be working in the UK since 2004. It has been reported that he was one of the two persons arrested from the burning car, which tried to crash into the Glasgow airport. The other two arrested persons have been identified as Mohammed Jamil Abdelqader Asha, a 26-year-old Palestinian holding a Jordanian passport, who completed his medical education in Jordan in 2004 and took up a job in the UK in 2005 and his wife. Both Asha and his wife were picked up while they were driving on a highway in Cheshire. The Pakistani media has described Asha as a Palestinian from the Lebanon, who subsequently went to Jordan and as the suspected ring-leader of the cell, which was involved in the incidents in London and Glasgow.

The London correspondent of the News of Pakistan has reported that the British Police raided a house at Hatherley Street, in Toxteth, in Liverpool where four Asians, who were in their 20s, lived. There were no arrests since the four persons were not in the house at the time of the raid. However, the neighbours claimed that the four were from Pakistan and Yemen, and had lived in the property for only a few months. They attended the Al-Rahma Mosque at the end of the street. It is not known whether they were also doctors.

A Sudden Change Of State