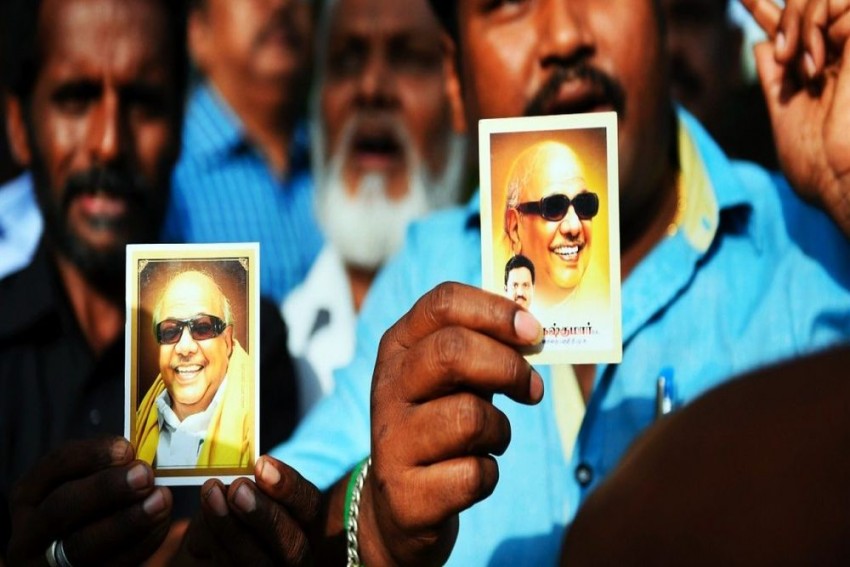 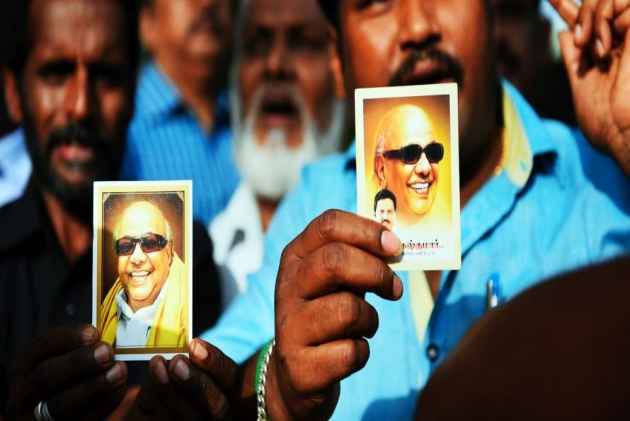 His followers adored him, his rivals simply hated him. Either way Muthuvel Karunanidhi was an indispensable ingredient of Tamil Nadu politics for over five decades. Whatever his role - Chief Minister, opposition leader, remarkable orator or a voracious Tamil writer - Karunanidhi (94) left an indelible mark with its own unique properties. But Tamil Nadu and Tamils will first remember him as one indefatigable politician who never gave up.

MGR stepped into politics with the aim of furthering his cinematic career and used the DMK’s network to promote his movie graph. But Karunanidhi was born to be a politician and his flirtation with cinema was to expand the scope of his politics. Asked once which one role would he choose among his many facets - politician, litterateur, film personality or social activist - Karunanidhi replied that politics was the fount for every other interest of his. "You stop the fount, the rest die, along with me," were his words.

As a boy Karunanidhi got drawn by the social reformer Periyar's fire-brand politics that waged a war against the hegemony of Brahmins in the 30s. Starting his life as a composer in a press run by Periyar, Karunanidhi, though unschooled beyond class 8, devoured whatever Tamil books came his way. The knowledge thus attained polished his oratorical skills and soon Karunanidhi the lad could quote from Tamil classics to drive home a point.

He lacked the erudition of Annadurai or the academic brilliance of his peer Nedunchezhiyan but Karunanidhi packed a wry worldly humour and sarcasm. The sting in his speech and writings made him an instant hit. He came into his own as the dialogue writer for the Tami film "Parasakthi" in which while firing away at lustful temple priest he actually guns down the social beliefs and superstitions associated with Hindu religion. Thus began a brilliant career as script and dialogue writer for Tamil films and a Karunanidhi name on the film’s posters ensured packed halls.

When Annadurai parted ways with Periyar and floated the DMK Karunanidhi was one of his preferred generals who led the famous anti-Hindi agitation of the 60s that ultimately propelled the DMK to power in 1967, shutting the door on the Congress till today. Proving to be an able administrator Karunanidhi also shrewdly built a following in the DMK once Annadurai started ailing from cancer. Post Annadurai he pipped Nedunchezhiyan to the CM's chair by some adept power play, roping in MGR to his side.

Only to see MGR revolt and ride to power in 1977 and consign him to the number two slot in the state's polity for almost a decade. But the shrewd Karunanidhi never went out of political contention. He kept his party going with a string of political agitations, through letters and appeals to his cadres in the party organ “Murasoli”, rarely going out of the headlines and projecting himself as the ultimate guardian of Tamil interests world-wide.

This Tamil fixation proved to be his undoing when he finally recaptured power in 1989, as his overenthusiastic support for the LTTE led to his second dismissal and the subsequent assassination of Rajiv Gandhi left the DMK shattered. The LTTE ghost even tripped the UF government in which the DMK was a major player. Jayalalithaa's woefully corrupt regime enabled Karunanidhi to bounce back to power in 1996 only to lose it to a much wiser Jayalalithaa in 2001. But when the Eelam struggle entered its final phase leading to the LTTE’s destruction in 2009 Karunanidhi could only remain a hapless spectator as he had to balance his pro-Tamil image while safeguarding his government’s survival in the state.

Karunanidhi proved to be a master of striking quick political compromises and justifying his U-turns with clever word play. After being dismissed by Indira Gandhi in 1976 after opposing the emergency, he joined hands to fight the Janata Party in 1977 only to fight the 1980 Lok Sabha elections with Indira. He justified the alliance with Indira Gandhi with the observation, “We only warned that the emergency was a powered electric cable that is too dangerous to touch. That did not mean we were against Indira Gandhi. Only she can ensure stability now,” he argued. In 1999 he fought alongside the BJP, after having dubbed it a party of religious minstrels in 1998. Five years later he buried the ghost of Jain Commission and Rajiv Gandhi’s assassination to shake hands with Sonia Gandhi that resulted in the DMK emerging as a power player in Delhi after the 2004 and 2009 elections.  The 2006 Assembly elections saw Karunanidhi without an independent majority for his DMK but the master tactician still managed to form a single party government ensuring that his allies ended up giving only outside support but not getting a share in power.

The patriarch’s obsession with his family first saw the expulsion of Vaiko in 1993, when he emerged as a serious challenger to son Stalin’s succession plans. The family syndrome once again saw Karunanidhi haggle with the Congress for berths for his son Alagiri, daughter Kanimozhi (unsuccessful) and grandnephew Dayanidhi Maran and juicy portfolios for them after the 2009 Lok Sabha elections. The unfolding of the 2G scam, scripted by A. Raja, further dented the image of the DMK and the UPA. His last term saw the emergence of too many family members turning power centres and finally exploding into an open war between his two sons – Alagiri and Stalin, with the latter winning the battle.

Even at 92 Karunanidhi hoped to have another shot at the Chief Minister’s chair during the 2016 elections refusing to make way for his son Stalin. It proved to be a costly error as Jayalalithaa nosed ahead with a narrow margin confining Karunanidhi to the opposition benches.

In spite of the long shadow he cast on Tamil Nadu’s polity, Karunanidhi’s fixation with his family, his compromises for short-term political gains and refusal to break away from MGR and then Jayalalithaa centric politics would render this veteran an astute and street-smart politician who could never turn a statesman however hard he tried.