Love In The Times Of 'Redevelopment'

Not just anger against a destructive plan being forced on them, but also sheer love for trees, recently brought Delhiites together to save some 15,000 trees. Discreetly among them were government servants who were supposed to be the beneficiaries of the plan 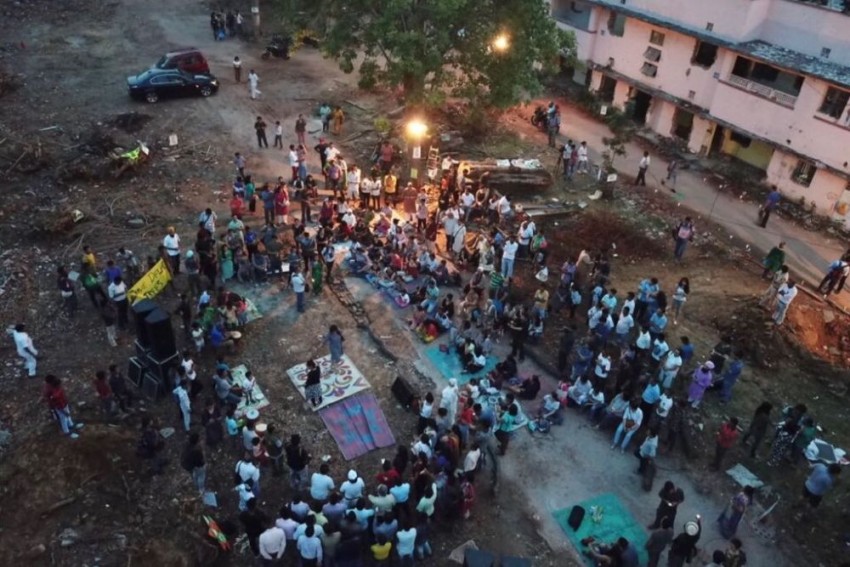 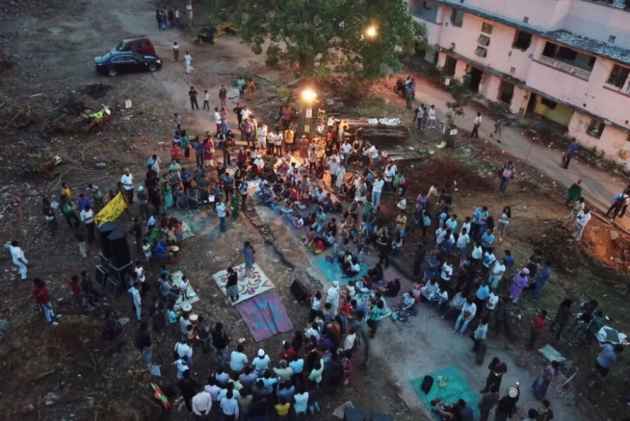 "After all, I am a government servant”, the gentleman said, his body turned three-fourths away from me, his head turned away even further, his eyes scanning the surroundings. It felt like I was debriefing a spy on a public footpath in an enemy country. But this footpath was our own. And we had made it doubly so by sitting on it, tying ribbons around its trees, organising talks and lighting candles on its rickety tiles, painting posters and singing earnestly all over it, for several evenings in succession.

The government servant would rather not be seen consorting with us — we, whom the Minister for Housing and Urban Affairs (MoHUA) had described as “mischief mongers” misinforming the public, just the previous night. And yet, there he was. It was trees that had brought him, reluctant and afraid, to our patch of the footpath in Africa Avenue, which we were calling the site of a daily protest vigil. A vigil to save an estimated 15,000 trees of Netaji Nagar and Sarojini Nagar, as well as four smaller government employees’ colonies, threatened by a central government colony ‘redevelopment’ scheme. 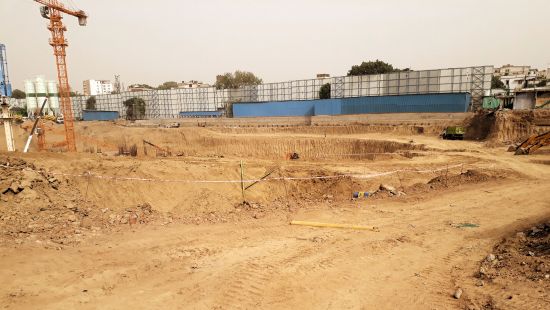 Trees had clearly made it hard to keep away, once he learnt of our protests. “I grew up here, next door in Laxmibai Nagar”, he said, uneasily eyeing the local police and Special Branch constable who had come to keep an eye on our dharna. “In my boyhood we used to understand the seasons by these fruits — mango season, jamun season, shehtootseason”, he said addressing me with the back of his head. “And now…”, he made a helpless gesture.

Through the month of June a string of such ‘government servants’ had spoken to us in confidence, refusing to be quoted or appear on camera. We respected their fears. After all, we had just spoken to some residents of the erstwhile East Kidwai Nagar, a colony that had been ‘redeveloped’ out of existence over the last two years, its decades old semal (silk cotton) and peepal trees decimated for congested high rises and ornamental Dubai-like palms. These East Kidwai Nagar residents were the owners of some small free-hold flats at a corner of the new redevelopment. When they refused to move from their homes, they had faced a barrage of harassment: MTNL lines cut, intrusive ‘surveys’ of their houses, electricity problems, construction dust and debris all around their homes. They eventually won a court case and got to keep their flats.

So, we respected the fears of the ‘government servants’ but got to hear the most heartwarming and heartbreaking stories from them anyway, every evening among our candles and songs. There was the police officer who said he had planted the trees in his house and now birds were nesting in them. Every morning his wife would cry fearing that the baby birds would die. “Being in uniform, I can’t help you much, but…”. There was the Sarojini Nagar resident, who after four days, overcame his hesitation enough to say on camera that new housing could be made on the same space in which existing flats stood; why did trees need to be cut for this? 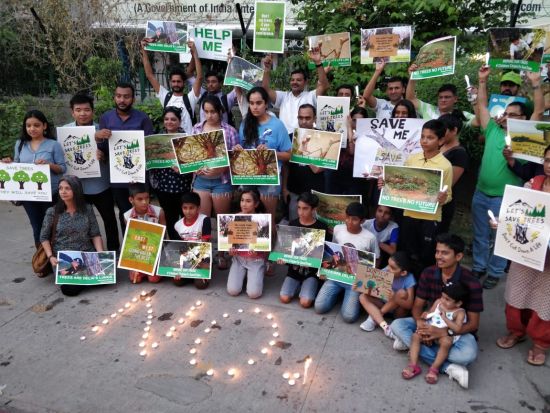 There was the RWA president who laughed at the idea of the redevelopment being done for housing. “Madam, it’s all for commercial reasons.” He had a point. While the colony redevelopment is being emotionally sold to the public as a project to provide much-needed housing, actually Nauroji Nagar (site of a World Trade Centre) and Thyagraj Nagar (site of commercial office blocks) will not have a single house. And in Sarojini Nagar, the commercial space (appx. 19 lakh square metre) outstrips the residential (appx. 17 lakh square metre). It would seem that the powers that he had noticed some of the greenest areas of Delhi and basically seen ‘real estate’.

A lady who lived in the flats near our protests site would send offers of tea and water. She would be shifting out soon having lived here for 30 years. Her neighbour was very upset. “Please, please think of the plants also,” she begged us. Her lament rose over the empty Sarojini Nagar flats: “We planted roses, we planted tulsi. Now they just come and tear them out and throw them away. Go to NBCC and tell them there is no need to kill all our plants. Tell them to keep the plants somewhere so passersby can take home the ones they want.” She looked miserable. “They were such beautiful healthy roses…”

I used to feel helpless in this rising tide of requests, looking at our little band of activists: people with full-time jobs, mothers with families to look after, asthmatic children who would return to school in a few days, students who were ignoring PhD deadlines. We were beseeched by emails, messages, phone calls and urgent personal requests: “Please file a PIL now or it will be too late. Please come to Sundar Nagar too, don’t you care about those trees? Please try to stop the tree felling in Dhaula Kuan also! Have you heard they chopped trees overnight at Akbar Road?…”

Love in the times of ‘redevelopment’. It is what kept us going. People patted us on the back and told us what a good job we are doing and if we needed any help. We kept going to the protest site, our candles spelling out “no” and “resist”, our children telling the media that they had to be on nebulisers for several months after Diwali. NGOs and RWAs conducted a Chipko movement, inviting people to hug trees, and they came in droves. Another NGO helped children climb and hug trees in the Netaji Nagar area, where the felling had just begun. Eventually, several ‘government servants’ too ended up visiting us every night, sometimes joining in as we sang Honge kamyaab ek din. They promised to let us know if any tree felling started surreptitiously at night. They helped patrol Netaji and Sarojini Nagars. They were impassioned, sorrowful, bitter, angry and helpless in turns. The trees should simply not be cut, they agreed, this group of citizens derisively called “babus” by TV channels and commentators.

One night, early in July, we were returning home after a protest event at Netaji Nagar, G Block, where felling had already taken place before the High Court gave a stay on it. G Block was a haunting site of abandoned flats, with their doors and windows taken off and tree logs scattered around what used to be a children’s playground. Sarojini Nagar’s children — students of the local Navyug school — who joined us every day, as well as activists’ children who came from different parts of Delhi for their right to live healthily, had painted slogans on the logs. “Why did you kill me, I only gave you oxygen,” said one fallen tree.

As we left the site, at almost midnight, a lady emerged from the dark. She was a PA in one of the ministries. “Please do something for the dogs and cats,” she said. “Please. They are dying. I hire an autorickshaw everyday with my own money — she points to the auto —  and go around keeping food and water wherever I can. But I can barely cover half of Netaji Nagar. I am tired of seeing dead cats and dogs. I keep trying to bury them.” She started weeping. We tried to console her and started crying ourselves.

It was such love and such anger that made possible successive stays on tree felling from the High Court and the National Green Tribunal; a thorough questing of the environmental aspects of the redevelopment project in the High Court; a revocation of all tree-felling permissions for the project by the Delhi government; and an assurance by the Ministry of Housing and Urban Affairs that the redevelopment plans would designed afresh.

And in the press reports on these news items every morning we continue to see them all, children as well as grown men and women, embracing trees, tying rakhis on them, kissing them, with eyes closed and swelling hearts. A moment of tender passion in a storm of defiance.

Post Script: Cases against MoHUA’s colony redevelopment project (being carried out by NBCC India Ltd, and CPWD), filed by different individuals and organisations, are currently being heard in the National Green Tribunal and the High Court. There is a temporary stay on tree felling. The next hearing in the NGT is on 19 July and in the High Court on July 26.

(Juhi Saklani is a writer and photographer and one of the organisers of Delhi Trees SOS, a platform created to save trees from being cut for ‘redevelopment’ in Delhi)