Love In The Time Of Puja 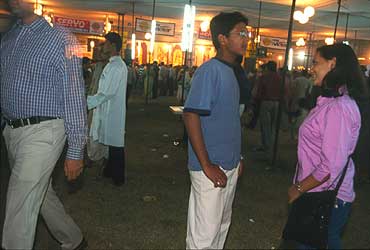 It's carnival time on the streets of Kolkata once again when the annual ritualistic Durga Puja, followed by a string of related festivities, turn the whole city upside down. It's as though the entire Bengali community as a blob of humanity converge on the streets to become a part of the there-is-no-tomorrow celebrations as the Marxists glibly replace Maoistic saying of let a thousand flowers bloom with let a thousand romances blossom.

Never mind that most of these wilt as the Puja flower offerings at Ma Durga's feet but the dating/mating game peaks at these times when even under bulbously fleshed matrons and eagle-eyed boudis, young men dart messages with their eyes to young maidens. The latter coping with their first ever saris and stilettos manage to reciprocate quite well, thank you. To quote ad lines that unfurl with puja campaigns, this is the time to be young, to have fun. The magic of romance becomes  synonymous with the magic of the celebrations under the benign eyes of Ma Durga whose own romance with Lord Shiva is in keeping with the notoriety of Hindu gods and goddesses when it came to affairs of the heart anyway.

Mating may not follow dating but the latter is an opportunity. "Saris or spaghetti straps, Pujas are a time when boys look at girls and girls look at boys and it has ever been the same," says twenty something Saibal Gupta who is still not focussed on his career as yet but has a thing or two for this neigbourhood girl whom he still has not managed to date. This is his chance to approach her though the irony is that he will not be alone. He will be accompanied by a host of friends playing cupid.

"Puja is the time to pandal hop but not exactly bed hop," firmly states Nayoni Basu, a third year sociology student of Presidency College, Calcutta. She cites Maddox Square (in south Kolkata) where the young and the hip meet during Puja time to have fun. From a small group it fans out to a greater interaction. It's very cerebral for most of the time. "If individual romances splinter off from these gathering of young men and women, fine. No one questions this," she adds.

If things do not work out, or romances concretize into tying the knot, fine too, for this marks the coming of age of the youth in a collective way; very Indian like. The fizz, a blind date or three, it's all there and in exceptional cases like that of magician P.C. Sorcar, even marriage. "Romances during the pujas are not mere flings. They do last. I met my wife during my locality Durga Puja and our relationship has stood the test of time and circumstances," he says.

There is magic in the air whichever you wish to interpret it. "The ambience of sweet smelling flowers, the incense mingled with perfumes make it a time for me to also look at women. There is no age for romance. I am still an incurable romantic and the pujas keep this spirit alive in today's matter of fact attitude," avers Buddhadev Guha, veteran writer.

There is no conscious spouse hunting unlike in family wedding where a far more conscious match making takes place keeping the caste/creed factor, a social occasion like the Durga Puja does give ample scope to young men and women to meet in a society that is still conservatively middle class.

Earlier the pujas held at traditional homes worked almost like a family wedding when the unmarried sister of the newly married bahu caught the fancy of the first male cousin of the eldest bahu when the extended family congregated at one place.  In most of the times, it did end in marriages.

The puja grounds are a happy hunting for romantic associations for those looking for one or it might just happen. "I remember meeting young men who were utter strangers when I started to go out with my friends, but most of the time in groups," says Swati Mukherjee, a young married college lecturer, "A couple of such meetings followed up by subsequent pujas, did end in marriage and even though I have lost touch with them, I recall one such relationship that ended in murder," she says.

Perhaps the very nature of the four-day celebration unfurls like a story board of a  cola advertisement. In a traditional family puja, it is love at first sight for a young man fumbling in his dhoti for a young woman who is a tease. The love is sealed by the last day - dashami - when they young mostly go to immerse the idol. There is just that hint of a romance. Its very here and now. Like a prom party in the United States, a lot of firsts do happen during the celebrations. The first time a young man smokes or gets drunk or even kisses.

Pujas are a time when the young hardly spend at home which spell a break from routine, and curfews. All night revelry, a free mixing between the sexes do give rise to certain hiccups but with the excitement fading away, these too fade and normal life returns. "I have seen four instances of Pandal romances that culminated in marriage," says Barun Basu, a resident of New Alipur. "One couple met while rehearsing for a play in which they played a romantic pair !"

Of course the social sanction plays an important role here with the pujas playing the ghatak (match maker). "I would liken the puja love or lust with temple romances of the south," compares N. Vishwanathan, professor and actor, a Tamilian who is a long time resident of the city. "I should imagine there is a lot of romancing among the young which is natural. At least among those people who do not come from a liberal background, he says". Love, sex and god are a part of Indian erotica according to him and the Pujas do act as a catalyst in these matters.

There is considerable ad spend during this time when the buying is centred around buying apparels, shoes and paints so the ads too harp on this romance theme. Interesting visuals of love among the family with a huge segment of it targetting the young, is the other popular theme. Colas and chocolates take care of that.

D.K. Guha, associate vice-president, Lintas, Kolkata, talks of a campaign for a paint company which focussed on the more energetic folk dancing as part of puja celebrations so that the young could take part if they wanted to, unlike in classical performances. This leads us to another trend that seems to be taking over the city gradually - the dandiya - the dance which has assumed free mixing to promiscuous heights as both men and women paricipate in a night-long celebration.

The city is far from promiscuous but Mani Shankar Mukherjee, corporate communicator and writer is a bit incredulous. "What romance? In the jostling crowds? Don't you need some privacy for that? The young never had it so good in  meeting whom they wanted or where. So why the puja pandals?" he questions.

Good question that. Except there is no clear cut answer. Perhaps the search for a good romance is always more exciting than the real one or this meeting dating mating is part of the cycle of life that puja rituals with social dimensions reflect.

'Transcending The Boundaries Of Time'