The match lasted 46.4 overs, which is the shortest completed 50-over ODI match in India featuring India. 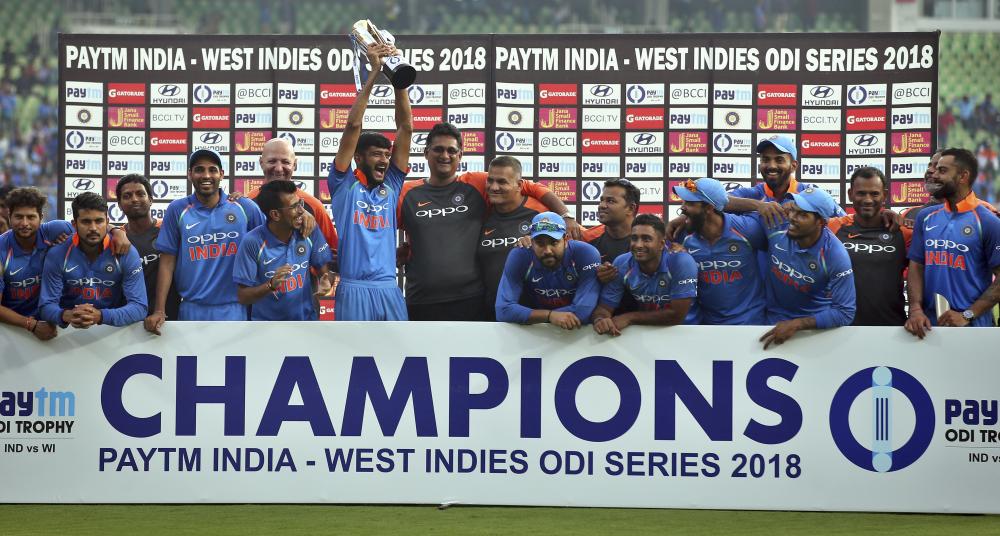 India chased down a target of 105 runs set by the West Indies with relative ease with the series' two top batsmen – Virat Kohli and Rohit Sharma – posting a 79-ball 99-run second-wicket stand after losing Shikhar Dhawan in the first over itself at the Greenfield International Stadium, Thiruvananthapuram on Thursday.

The match lasted 46.4 overs, which is the shortest completed 50-over ODI match in India featuring India.  The previous fewest was 48.1 overs, against New Zealand in Chennai, 2010.

Earlier in the day, Windies captain Jason Holder won the toss and opted to bat first. At the toss, Kohli said that he would have opted the bowl first as well. And it seemed the toss played a big role in the outcome of the match. But, it was one brilliant all-round effort by India.

The T20I series starts on November 4 at Kolkata.

Huge win for India. Rohit Sharma and Virat Kohli made sure that India canter to an easy win in the fifth and final match. The win helped India take the five-match ODI series 3-1.

The star pair also posted an unbeaten 99-run stand for the second wicket from 79 balls. Rohit hit the winning runs off the penultimate ball of the 15th over, bowled by Devendra Bishoo.

Rohit Sharma changed the gears and hit his 37th ODI fifty in 45 balls. He has hit five fours and four sixes so far. Virat Kohli is playing a subdued innings. Role reversal.

The two leading scorers of the series has added 46 runs from 50 balls for the second wicket as India inched closer for yet another huge win against the Windies.

Virat Kohli has raced to 12 in no time, thanks to three fours. But he did survive a dropped catch off the 1st ball of the fourth over, bowled by Oshane Thomas. Rival captain Jason Holder dropped a sitter at first slip.

India need another 75 runs to win the match.

This is getting interested. Oshane Thomas has given the Windies a flicker of a hope. Shikhar Dhawan played on the fifth ball of the first over. Bowled. India started the chase with a four of the first ball.

With India leading 2-1, fans were expecting a good fight from the Windies. But this is one poor showing from the visitors. After suffering their biggest defeat to India in Mumbai, they have been bowled out for the lowest total.

Ravindra Jadeja took four wickets, while Jasprit Bumrah and Khaleel Ahmed picked up a brace each. For the Windies, skipper Jason Holder was the leading scorer with 25 runs. And only three batsmen registered double-figure scores.

Ravindra Jadeja has done it. In his final over, the star all-rounder took two wickets to register figures of 9.5-1-4-34. Kemar Roach and Oshane Thomas were the wickets.

This is Windies' lowest total against India. Their previous low was 121 at Port of Spain in 1997.

Ever reliable Kuldeep Yadav got his first wicket. Keemo Paul tried to play a sweep shot but ended up top edging. Ambati Rayudu took completed the send-off with a catch at long-on.

Three balls later, new man Kemar Roach survived a close call after the umpire raised the finger to an India shout for LBW. He took the review and saved.

Khaleel Ahmed got his second scalp of the day. Wicket maiden for him in the 26th over. Another clean take from Kedar Jadhav at mid-off.

The Windies captain Jason Holder is waging a lone war against India. He's not the leading scorer for of the innings. He and Keemo Paul have added 21 crucial runs from 24 balls.

For India, Jasprit Bumrah and Ravindra Jadeja have taken two wickets each, while Bhuvneshwar Kumar and Khaleel Ahmed contributed with a scalp each.

Two wickets in two overs for India. Jasprit Bumrah got his second, thanks to a brilliant catch by Kedar Jadhav at fine leg.

Keemo Paul joined skipper Jaso Holder in the middle. The Windies are in deep trouble.

Khaleel Ahmed got his first wicket of the day. Povman Powell mistimed his shot and Shikhar Dhawan took a good catch at deep square leg.

Fabian Allen is the new man for the Windies.

Ravindra Jadeja got his second of the day. Trapped Shimron Hetmyer in front. The spinner begged the captain and MS Dhoni to take the review, and it returned positive.

And that brought Windies captain Jason Holder in the centre.

Ravindra Jadeja struck in his second over. Got the prize wicket of Marlon Samuels, caught at cover by Virat Kohli.

Shimron Hetmyer is the new man for the Windies.

Virat Kohli sticking with Bhuvneshwar Kumar and Jasprit Bumrah even as the Windies pair of Rovman Powell and Marlon Samuels look to rebuild the innings from the scratch.

The first boundary of the match hit by Powell off the third ball of the sixth over bowled by Bumrah. A lofted drive over mid-off.

What a start from Indian pacers. Bhuvneshwar Kumar and Jasprit Bumrah struck in their respective first overs to reduce the Windies to

First, Bhuvi managed to entice Kieran Powell to attempt a drive against a moving delivery. Caught behind.

Then, Bumrah responded with a beauty. A pitch-up delivery, moving just enough to beat the bat.

Marlon Samuels joined Rovman Powell in the centre. The Windies are in big trouble.

The Windies captain Jason Holder has won the toss and opted to bowl first.

India are fielding the same XI, while the Windies have left out injured Ashley Nurse and opener Chandrapaul Hemraj. Devendra Bishoo and Oshane Thomas come in.

Welcome to our live coverage of the fifth and final ODI match between India and the West Indies being played at Greenfield International Stadium, Thiruvananthapuram.

IND Vs WI, 5th ODI: MS Dhoni On The Cusp Of Historic Feat