Rashid Khan finishes with 4/9 while Mujeeb Ur Rahman got 5/20 as Afghanistan beat Scotland by whopping 130 runs. 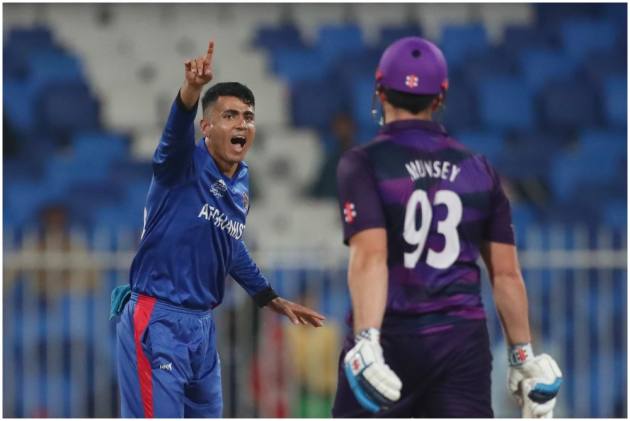 After the Sunday night blockbuster clash between India vs Pakistan, the ICC Men's T20 World Cup spotlight will shift to Afghanistan, who will begin their Super-12 campaign with a match against Scotland, who qualified from Round 1. The Afghans have the benefit of playing a couple of warm-up games, but Scotland have the real match feel having scored a memorable win against fancied Bangladesh in the T20 World Cup 2021 qualifiers. Afghanistan, once the poster boy among Associate nations, have the bowling attack to test any team in the world. In Rashid Khan and Mohammad Nabi, Afghanistan have two of the world's most exciting T20 cricketers. And on Sharjah's slow turners, the Afghan troika of Rashid Khan, Nabi and Mujib Ur Rahman will really pose a challenge to the well-drilled Scotland team. Josh Davey could be Scotland's man of the occasion. The right-arm seamer has already taken eight wickets in three games. Afghanistan have never lost to Scotland in six T20 internationals played between them so far. Follow T20 World Cup 2021 live cricket scores of AFG vs SCO here.

This is the second time there have been five LBW dismissals in an innings in this T20 World Cup. Netherlands were the other sufferer when they were all out for just 44 against Sri Lanka last week. Incidentally, both the matches happened in Sharjah.

Rashid Khan polishes off the Scotland tail with the final two wickets.  He dismisses Josh Davey and Bradley Wheal in consecutive deliveries to finish with 4/9. Scotland 60 all out in 10.2 overs. Afghanistan win by 130 runs.

Looks like Scotland want to go home early. Chris Greaves goes for run-a-ball 12 to gift Rashid Khan his second of the match. Scotland 54/8 (9)

Rashid Khan into the attack and he strikes straightaway.  Michael Leask plumb in front for another duck. 38/6 (6.3)

It seems the match is all over for Scotland. Mujeeb Ur Rahman dismisses George Munsey for 25, clean bowled. Are we seeing an early closure of the match? Scotland 37/5 (6).

Oh dear! After Mujeeb's three-wicket burst in an over, Naveen-ul-Haq dismisses Matthew Cross for a first-ball duck. Scotland 30/4 (4.3)

Super start by Scotland with George Munsey hitting a four and a six in the first over. Scotland 11/0 (1).

With 11 sixes, Afghanistan become the team to have hit the most number of sixes in this edition of the tournament so far.

This T20 World Cup can't get anything better. Solid batting performance from the Afghanistan batsmen. Hazratullah Zazaib (44), Rahmanullah Gurbaz (46) and a brilliant half-century by Najibullah Zadran (59) take Afghanistan to a mammoth 190/4 in 20 overs.

What a knock from Rahmanullah Gurbaz. With wickets in hand, Gurbaz goes for the big hit, but the ball goes straight up in the air for the extra cover to take a comfortable catch. His first 27 balls yielded just 23 before opening he opened his arms. he goes for 46. Afghanistan 176/3 (19)

Meanwhile, the Afghans fight it out here in Sharjah, in Dubai, the new owners of the two news teams have been finalized. It’s the RPSG Group and CVC Capital. Welcome to Indian Premier League CVC Capitals. RPSG had earlier owned Rising Pune Supergiants for two season.

Huge wicket for Scotland. Mark Watt dismisses, Hazratullah Zazai, clean bowled for well-made 30-ball 44. Can this be the turning point in the match?  Afghanistan 82/2 (10)

Mohammad Nabi (AFG): We have decided to bat first. The pitch looks good to bat on and we will try to post a good total and defend.

Kyle Coetzer (SCO): Its a good toss to lose as we would have bowled anyway.  The team have been performing well on the field and we will go with the same team.

Afghanistan have won the toss and they will bat first.

Who's gonna win tonight? That's a tough question to answer after Scotland's performances in Round 1. Mind it, it's the same Scotland side that have won against Bangladesh on the first day of the tournament.  Looking at the squads, it's even on paper with both teams having quite a few match-winners in their sides.

Afghanistan enjoy a 6-0 head-to-head against Scotland. The last time both these teams faced against each other was more than five years ago.

Hello and welcome to another Outlook Live blog. After a cracker of a India vs Pakistan contest in Dubai yesterday, we are back in action with Afghanistan facing Scotland in their Super 12 opener.