Omar Abdullah's much feted speech has become a spur of sorts for Hindu outrage in the Jammu region. Perhaps what has stirred people is the public suicide by Kuldeep Verma-Dogra in Jammu's Parade Ground. Being seen as an extreme reply to Omar's claim. 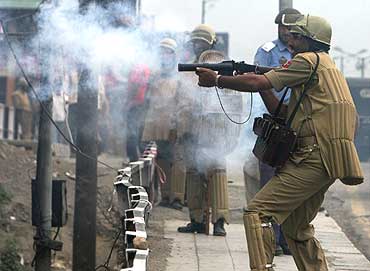 When political pundits as well as ordinary citizens heaped praise on Omar Abdullah for his speech during the trust vote in Parliament on July 22, they were applauding him for his oratory. Indeed, the National Conference president seemed to have scored brownie points when he said he was a Muslim and an Indian. Comparisons were immediately drawn between his skills at public speaking and the "childish" effort of Rahul Gandhi.

In retrospect, Rahul's speech may not have had any fire or brimstone, but it also did not set passions aflame. On the other hand, Omar's elocution is the subject of much criticism in Jammu. His statement in the Lok Sabha in the context of the land allotment to the Amarnath Shrine Board has invited much derision. Omar had said that Kashmiris have always fought for their land and were prepared to lay down their lives for it. This part of his speech has become a spur of sorts for Hindu outrage in the Jammu region.

Perhaps what has stirred people is the public suicide by Kuldeep Verma-Dogra in Jammu's Parade Ground. In his suicide note, he allegedly wrote, "I'm giving up my life for the cause. Do remember me when the land is restored to the Amarnath Shrine Board." His death is being seen as an extreme reply to Omar's claim that Kashmiris are willing to lay down their lives for their land.

Kuldeep has become a martyr and the fulcrum around which the current Jammu vs Kashmir Valley agitation is hinging.  Till his suicide, the protests over the Amarnath land issue were rather muted. But it has became emotive and has brought to the surface the bottled anger of the average Jammuite who believes that the region is being ignored by governments run by people in the valley, of which the Abdullah family is the most prominent. Kuldeep has become the rallying point for those disgruntled with the step-motherly treatment meted out to the Jammu region.

Omar has turned silent ever since he became the target of protesters. His effigies are being burnt. He's Villain No 1 on the Jammu side of the Bannihal Pass. Surely he didn't wish it that way. Perhaps he was carried away by the heat of the moment to say what he did in the Lok Sabha. People in his party point out privately that he should have stuck to the nuclear deal, the focus of the trust vote debate, and not stepped into the mine field called the Amarnath land controversy.

Which brings us to the point about impromptu speeches. Omar has pointed out in interview after interview that he just said what came to his mind. He was merely airing his emotional response and that worked vis-a-vis the nuclear deal. But when he was heckled by BJP MPs about the Amarnath land, he spoke out in an angered voice. It was a response that could well have been avoided.

Had Omar delivered his prepared speech, rather than speak in the heat of the moment, he wouldn't have entered uncharted territory. The hecklers wouldn't have been responded to. Because they wouldn't have figured in his prepared text.  But then, perhaps, his speech wouldn't have had the impact that spontaneity brought with it. A nuanced speech never has the resonance of an emotional outburst.

But even here people ask questions. Has Omar's admission that he regretted being a minister in the NDA government come a trifle too late? Shouldn't he have quit right there and then? Was he just following the Abdullah tradition of pretending to be supportive of the government of the day? Such accusations may be unfair. But Omar has to learn a thing or two about what he says in the House.

There are great speakers who simply stand up and deliver. Laloo Yadav is a good example. But he has honed his skills for years in Bihar and has not said anything which falls into the bad taste category. Omar has unwittingly done that. Which is why a bland, haltingly delivered speech by the likes of a Rahul Gandhi may be better than an extempore applause winning one by Omar.