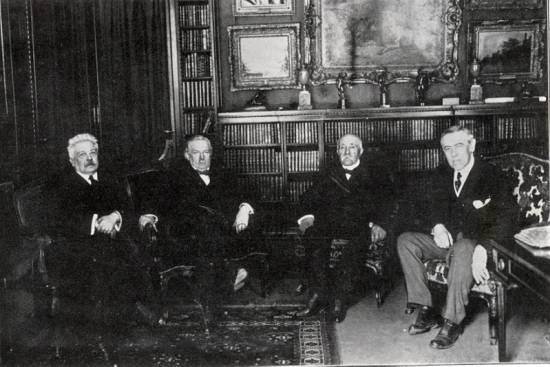 The summer of 2014 was a season of analogies and anniversaries. European leaders commemorated the start of World War One. Russian President Putin’s annexation of Crimea and destabilization and invasion of eastern Ukraine recalls the threatening and testing days before September 1939.

But as the Middle East and North Africa implode, perhaps focus should be directed on the end of the first World War— and specifically the settlement fashioned by US President Woodrow Wilson, British Prime Minister David Lloyd George and French Prime Minister George Clemenceau at Versailles in 1919.

Much of the chaos in the region today has its roots in Versailles and its associated treaties, so policymakers are contemplating the relevance of Henry Kissinger’s observation in 1994 that “whether an international order is relatively stable, like the one that emerged from the congress of Vienna, or highly volatile, like those that emerged from the peace of Westphalia and the Treaty of Versailles, depends on the degree to which they reconcile what makes the constituent societies feel secure with what they consider just.”

There are multiple echoes of Versailles in current headlines.

As David Gardner pointed out in the Financial Times, the frontiers that now appear to be shattering were sketched by the initially secret Sykes-Picot Agreement on spheres of influence in 1916, a “deal meant to limit Anglo-French rivalry in a Levant that might undermine the alliance against Germany.” Those lines were not intended to create cohesive future nation states in the Middle East, but rather preserve spheres of influence tailored to Europe’s empires, by dividing the region among them, and historian Margaret McMillan reminds us that “Sykes-Picot was made in the midst of the war, when promises were cheap, and the prospect of defeat very real.” After the war, T.E. Lawrence, the Lawrence of Arabia, arrived at Versailles determined to overturn Sykes-Picot, but failed. It is no coincidence the Islamic State's leader, Abu Bakr al-Baghdadi, declared in a July speech after his forces seized the Iraqi city of Mosul that “this blessed advance will not stop until we hit the last nail in the coffin of the Sykes-Picot conspiracy.”

Syria, a Sykes-Picot creation, is now racked by sectarian bloodshed. The Syrian conflict has spilled into both Lebanon and Iraq, the latter virtually fragmented into three blocks with the Kurds in the north, Sunnis in the center and Shia in the south.

There are also echoes of Versailles in the continuing tension between the principle of self-determination Wilson carried to Paris and the state system established in the Treaties of Westphalia in 1648. Many groups came to Versailles to plead for the chance to determine their own futures only to discover that it was a principle not to be universally applied.

The consequences of this legacy can be found in the Arab Spring, the collapse of Syria as a state and the emergence of an increasingly independent Kurdistan in northern Iraq, as well as the calls for change in Iran and the Gulf monarchies. Journalist and scholar Robin Wright has gone so far as to imagine a “remapped” Middle East, where “new borders may be drawn in disparate and potentially chaotic, ways,” and “The question now is whether nationalism is stronger than older sources of identity during conflict or tough transitions.”

The conflict between Sunnis and Shias reflects tensions dating back to Islam’s earliest days, but the severity of today’s fight has grabbed the world’s attention. As writers like Richard Haass and Borzou Daragahi note, today’s local or regional combatants struggle to maintain control over amorphous statelets and appeal to potential foreign backers for help— echoes of the Thirty Years’ War in Europe, 1618-1648. Haass writes for Project Syndicate that, while there are obvious differences between the events of 1618 to 1648 in Europe and those of the modern Middle East, the similarities are sobering: “The region’s trajectory is worrisome: weak states unable to police their territory; the few relatively strong states competing for primacy; militias and terrorist groups gaining greater influence; and the erasure of borders.” 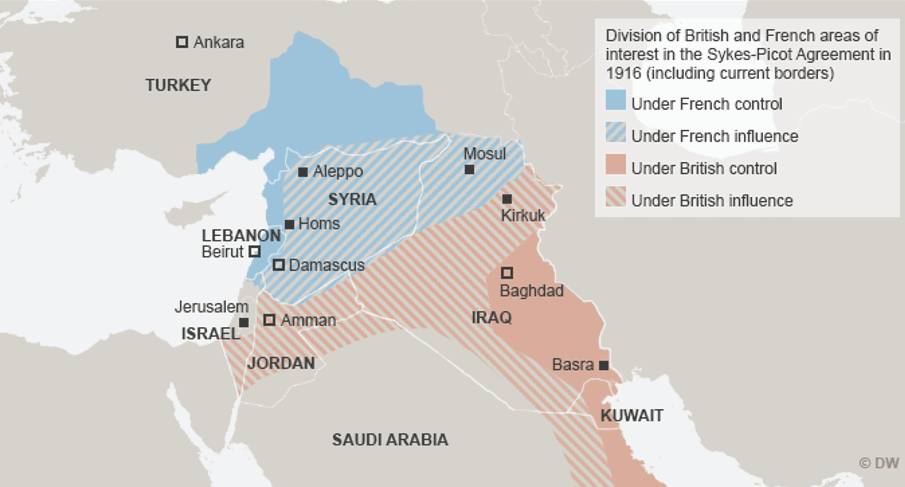 Arbitrary borders: France and Britain carved borders for the Ottoman Empire and determined their respective areas of influence with the Sykes-Picot Agreement and Russian approval in 1916: resentment lingers today (Map by DW)

The Obama administration confronts the enormous challenge of untangling this host of problems. It is easy to imagine US Secretary of State John Kerry asking of his director of policy Planning: What if the Versailles settlement continues to unravel? How can America pursue and protect its interests when states are increasingly weak while there is simultaneously an emergence of new authorities— like the Islamic State, also known as ISIL or ISIS— without recognized states?

Here are five ideas for planners to consider:

First, as President Barack Obama announced on September 10, ISIS must be degraded and ultimately defeated. This will be a long, hard project, which cannot be accomplished by America alone. Creating a coalition with echoes of the one fashioned by President H.W. Bush to fight the first Gulf War in 1991 is key. Leaders of the Muslim world— religious and political— must stand up to publicly renounce ISIS.

Second, a foundation for the military, financial and diplomatic effort required against ISIS must be a public reassertion of the values crucial to a peaceful future in the region. These have their roots in the Fourteen Points Wilson also took to Paris in 1918, but cannot be imposed from Washington. They must include an emphasis on pluralism and tolerance, the rule of law, the sanctity of the individual, and the desire of people around the world to make choices about their own lives— as well as modern values that have emerged since the era of Versailles, such as the role of women in society.

Third, the United States, its friends and allies must support those states in the region that are under stress but can succeed as national entities, even if their birth is linked to Versailles era. Israel, Jordan and Lebanon are all examples. But Kerry’s policy planners need also to be thinking about the outcome of a Syria which can never be put back together as well as a splintered Iraq.

Fourth, although hard to contemplate after the recent Gaza fighting, America will need to renew an effort to end the Israeli-Palestinian conflict. That struggle, connected to the end of WWI through the Balfour Declaration of 1917, is not the primary cause of the region’s turmoil, but two states living side by side in peace would help all other regional policies.

Fifth, there must be a focus on creating regional institutions and promoting economic growth. The United States and its allies and friends need to support regional institutions that would provide a larger vision for the people of the area but also mitigate the fracturing of states. Washington should also consider a second chance at a “Marshall Plan” for North Africa to try to bend history toward the original yearnings for dignity and justice of the Arab Spring.

As Richard Neustadt and Ernest May taught in their 1986 book, Thinking in Time: The Uses of History for Decision Makers, it is important to reason from the right analogies. Even though there are vast differences in the scope and circumstances of today’s challenges, reviewing the now all-too-relevant history of Versailles may help President Obama and Secretary Kerry manage the present crisis.

Richard Neustadt and Ernest May. Thinking in Time: The Use of History for Decision Makers. New York: The Free Press, 1986.

Ambassador Marc Grossman is a vice chairman of The Cohen Group. A Foreign Service Officer for 29 years, he retired in 2005 as US Under-Secretary of State for Political Affairs. The ambassador was the US Special Representative for Afghanistan and Pakistan, 2011-2012 and a Kissinger Senior Fellow at Yale in 2013. Simon Henderson is the Baker Fellow and director of the Gulf and Energy Policy Program at the Washington Institute for Near East Policy.