Left March On The Eastern Coast

'The nuclear deal, the military agreement and the economic policies designed to advance the interests of US capital are parts of the trio which are harmful for India's sovereignty, independent foreign policy and the people's economic interests.' 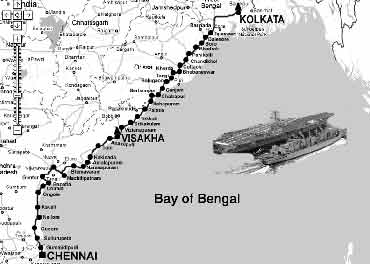 Courtesy, the September 2, 2007 issue of the CPI (M)'s party weekly, People’s Democracy, where this article appears under the heading "Stop Military Collaboration with America"

The Left parties have decided to conduct two jathas (marches) from Kolkata and Chennai to Vishakapatnam on the eastern coast from September 4 to 8, 2007. On these dates, for the first time, the Indian navy is conducting joint exercises in the Bay of Bengal with the US navy and with naval ships from Australia, Japan and Singapore. Till now, in the Malabar series of exercises, every year there have been naval exercises with the US navy mainly on the west coast. Now these exercises have been extended to cover the two close military allies of the US – Japan and Australia – who are part of the trilateral security cooperation in the Pacific region. These are the first steps for a “quadrilateral” tie-up which the US wants. That is why the Bay of Bengal is the venue.

The Left parties are conducting this mass mobilisation in four states of the eastern coast and simultaneously there will be a nationwide mass campaign from September 4 to 8 against the nuclear deal, the military collaboration with America and the economic policies affecting the people due to the growing influence of the USA.

The genesis of the current steps for strengthening military cooperation began in 2005 when the UPA government signed a Defence Framework Agreement with the US government in June 2005. This is the successor to the Agreed Minutes on Defence Cooperation signed during the Narasimha Rao government and taken forward by the BJP-led government.

At no time has India signed such an agreement in the past. Those who compare it to the Indo-Soviet Treaty of Friendship and Cooperation of 1971 are wrong. There is no comparison. By the current agreement with the US, four steps are being taken to integrate India with the global strategy of the United States.

Unlike the Indian government, which is coy about owning up its new military relationship with the US, we should see how the Americans view it. The Pentagon, in a statement timed for president Bush’s visit to India in March 2006, said: “These will serve key objectives of our strategic partnership by helping to build ties among our defense establishments and industries and to develop interoperability among our armed forces. Defence technology cooperation will contribute to strengthened military capabilities and will also result in economic benefits through expanded trade.”

For those who naively try to convince the Indian people that the nuclear cooperation agreement with the US is only a nuclear deal for our energy security, they should heed the words of Nicholas Burns, the American Under Secretary of State, who was responsible for negotiating the bilateral agreement. In the official briefing after the 123 agreement was reached, he said: “And I think now that we have consummated the civil nuclear trade between us, if we look down the road in the future, we’re going to see far greater defence cooperation between the United State and India: training; exercises; we hope, defence sales of American military technology to the Indian armed forces.”

Under the Defence Framework Agreement, India has agreed to sign the Logistics Support Agreement with the United States. This is nothing but the “Access and Cross-Servicing Agreement” which the US has with many other countries. Under this agreement, US ships and planes can use the facilities of Indian ports and airbases for refuelling, maintenance, servicing, communications etc. By such an arrangement, Indian ports and airports can be used by US warships and planes when they are deployed for offensive operations such as the attack on Iraq in 2003. This agreement is now before the Cabinet Committee of Security for approval.

India is getting meshed into the security cooperation sponsored by the United States. Earlier this month, the Australian Army Chief stated that a secret meeting of the Army Chiefs from 19 countries was held in Sydney. “There is a lot going on in Sydney and we don’t want to make a fuss”, Lt. Gen. Peter Leahy told the Australian Broadcasting Corporation. The conference was billed as the “Pacific Countries Army Chiefs’ Conference” and it was jointly organised by the US and Australia. India’s vice chief of Army attended the meeting. So did the US Army Chief of Staff.

If the Defence Framework Agreement is fully implemented, India would acquire the status of US allies like Japan and South Korea in Asia.

Coming to the September five-nation joint exercises in the Bay of Bengal, the Americans are sending two aircraft carriers – the USS Nimitz and the USS Kitty Hawk. Already the Nimitz has made a port call in Chennai in June. This aircraft carrier was used extensively in “Operation Iraqi Freedom” in 2003 for aerial bombardment and launching of cruise missiles which killed thousands of people in Iraq. It is known to carry nuclear weapons. The same ship is now stationed in the Persian Gulf, since April, as part of the build-up to intimidate Iran. It is during this duty that the Nimitz came to Chennai for a port call. The US Embassy called it a “landmark event”.

As for the Kitty Hawk, it is an older aircraft carrier. It has the dubious distinction of having served for a long period in bombarding North Vietnam and the liberation fighters in the south in the war against Vietnam in the 1960s. Kitty Hawk belongs to the Seventh Fleet of the US Navy. People in India remember the Seventh Fleet when it was deployed in the Bay of Bengal to intimidate India for supporting the liberation struggle in Bangladesh.

The nuclear deal, the military agreement and the economic policies designed to advance the interests of US capital are parts of the trio which are harmful for India’s sovereignty, independent foreign policy and the people’s economic interests.

In every election manifesto since 1996, the CPI(M) has called for the scrapping of the military collaboration agreement with the United States. The UPA government is mistaken, if it thinks that it can go ahead with such military collaboration without evoking strong opposition from the patriotic people of India. The Left parties have been the most consistent defenders of India’s sovereignty and the pursuit of an independent foreign policy.

The two jathas and the nationwide campaign will deliver a powerful message that the Indian people are opposed to India becoming a subordinate military ally of the United States.