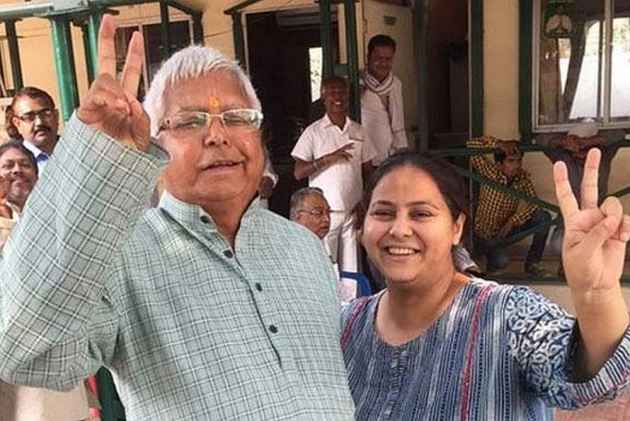 outlookindia.com
2018-03-04T18:48:14+05:30
RJD chief Lalu Prasad's daughter Misa Bharti has put the onus of running a company being probed for money laundering on her husband and a dead CA, even though the ED has said that the duo "actively conspired" to launder Rs 1.2 crore using shell firms.
The agency, in its chargesheet filed against the couple in December, had said they were "party and actively connected with proceeds of crime including its concealment, possession, acquisition or use and projecting or claiming it as untainted property, and thus are guilty of offence of money laundering."
A special court in Delhi took cognisance of the chargesheet - called the prosecution complaint under the Prevention of Money Laundering Act - and summoned the couple as accused in the case.
They are scheduled to appear before the court tomorrow.
The case is related to the purchase of a farm house in Delhi by Misa Bharti and her husband in the name of their company - Ms Mishail Packers and Printers Pvt Ltd - "using Rs 1.2 crore involved in money laundering in the year 2008-09."
Misa has been questioned by the Enforcement Directorate in connecetion with the case. She gave brief replies and told the agency that the day-to-day business activities of the firm were "looked after by her husband Shailesh Kumar and the financial records of this company were maintained by the CA of the company, late Sandeep Sharma."
Hence, she said, her husband and the deceased CA "would be in a better position" to answer questions about the company and the farmhouse purchased by it.
PTI has accessed a copy of the chargesheet.
"On being asked about the investment at a huge premium in the year 2008 in Mishail Packers and Printers Pvt Ltd from four companies...At Rs 100 per share with a share premium of Rs 90 per share... She stated that since the day-to-day business activity of the company during the relevant year was looked after by her husband and financial matters were looked after by their their CA late Sandeep Sharma, so the business profile of the company during that period can be explained by them," the Rajya Sabha MP said in her statement to the ED.
The agency has recorded Misa's statement under the PMLA.
Misa reiterated the answer and put the responsibility of taking care of business and financial activities of the firm on her husband and the CA when she was questioned by the Investigating Officer of the case about the shares of the company in 2009, purchased by her at a nominal value of Rs 12 per share.
Shailesh Kumar, in his statement to the ED, said he, as one of the directors of the firm, "supervised the day-to-day functioning of the company, guiding his manager and other employees."
He, however, told the ED that the "financial matters" of the company were handled by the CA and his company was "investing in purchasing agricultural land in anticipation of the proposed new master plan of Delhi."
The ED, in the chargesheet, said Misa and Kumar have "actively connived and conspired with Rajesh Kumar Agarwal (another accused in the case) and late Sandeep Sharma for the money laundering of Rs 1.20 crore through the shell companies controlled by Jain brothers and Santosh Kumar Shah (alleged hawala and shell company operatives) by providing funds in advance to them for making investment in their company and thus knowingly were party and actively connected with proceeds of crime including concealment, possession, acquisition or use and projecting or claiming it as untainted property."
It said that, based on these evidences, the couple are "guilty of offence of money laundering." It added that the two were the directors of the firm and were "in-charge and responsible for the conduct of the business of their company."
"They have failed to provide the source of unaccounted money provided to Jain brothers and others for making investment in their company," the chargesheet said. It said the couple as well as their company "have committed an offence of money laundering."
The ED is probing Bharti and her husband as part of its criminal probe in a Rs 8,000 crore money laundering case involving shell companies and two Delhi-based alleged entry operators Surendra Jain and Virendra Jain, referred previously as Jain brothers.
The Jains were arrested by the ED in the case.
The agency had also arrested Rajesh Agarwal, an accountant who mediated and provided a cash amount of "Rs 90 lakh to the Jain brothers in advance so as to invest in Ms Mishail Packers and Printers Pvt Ltd as share premium".
The agency said the Jain brothers, Agrawal and the daughter and the son-in-law of Lalu Yadav were the "key persons behind the money laundering of Rs 1.20 crore".
The ED had conducted raids at the farmhouse and few other places linked to Misa Bharti, her husband and others in July last year.
For in-depth, objective and more importantly balanced journalism, Click here to subscribe to Outlook Magazine

Phulpur, Gorakhpur Bypolls: BSP To Extend Its Support To SP To 'Eliminate BJP'