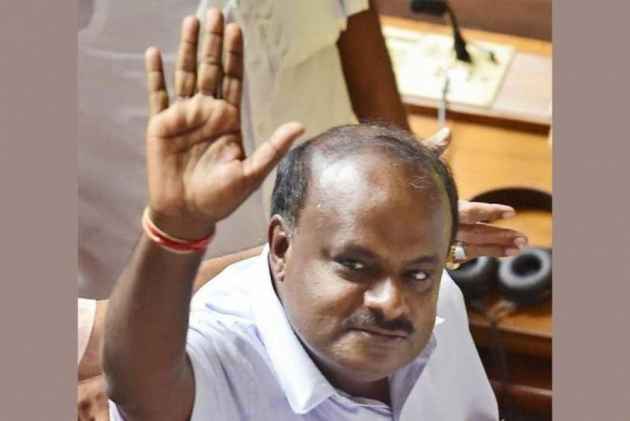 Karnataka chief minister H.D. Kumaraswamy announced on Thursday a farm-loan waiver of Rs 34,000 crore, even as he raised fuel taxes and liquor duties to mop up revenue to pay for the election-time promise. The debt waiver, an issue on which the Opposition BJP has been stepping up pressure over the past two months, will cover around 45 lakh farmers—each up to a maximum amount of Rs 2 lakh.

On how the government would foot the bill, Kumaraswamy said the plan was to reimburse banks—private, cooperative and public sector—over a period of four years. "We are not allotting Rs 34,000 crore at a time,” he told reporters at a press conference in Bangalore. “This year, in the budget, we have accommodated Rs 10,500 crore. In the next 3 years, we will complete it."

The crop loan waiver has been a keenly debated issue since the JD(S)-Congress coalition formed the government in May after the assembly elections. Incidentally, in June last year, following consecutive years of drought, then Karnataka Chief Minister Siddaramaiah had waived off farm loans of Rs 8,165 crore disbursed by cooperative banks. Coming in an election year, Siddaramaiah's move forced the BJP on the back foot, with the Congress daring the NDA government at the Centre to complement the gesture by announcing a waiver of farm loans from commercial banks.

In turn, the BJP, in its election manifesto for the May assembly elections, had promised to waive farm loans of up to Rs 1 lakh from both nationalised and cooperative banks, if voted to power. The saffron party emerged as the single-largest party yet fell short of a majority while Kumaraswamy's JD(S) and the Congress formed a coalition government.

Last year, the BJP’s Yogi Adityanath government in Uttar Pradesh got banks to write off loans amounting to Rs 32,000 crore in a waiver scheme, while Congress-ruled Punjab too this year announced a debt waiver. So did Maharashtra.

In Karnataka, the total outstanding amount of crop loans is estimated at Rs 55,328 crore. A government release said that the scheme announced on Thursday will cover at least 17.32 lakh farmers whose outstanding loans add up to Rs 30,266 crore overdue since December 31, 2017. Meanwhile, farmers who had repaid previous crop loans promptly and have running loans will be given an incentive of up to Rs 6,893 crore at Rs 25,000 per family.

The Opposition BJP was quick to criticise the increase in fuel rates—price of petrol will go up by Rs 1.14 per litre and diesel by 1.12 per litre—but the CM pointed to prices in neighbouring states. "Even then, petrol and diesel prices will be lower in Karnataka when compared to the neighbouring states," he said.

Karnataka's fiscal deficit is estimated at Rs 40,753 crore, around 2.89 percent of the gross state domestic product, while its total liabilities stand at 20.75 per cent of GSDP. The Fiscal Responsibility Act mandates a cap of 25 per cent.