He had begun his political journey by visiting the house of APJ Abdul Kalam in Madurai, describing the former president as his "role model". 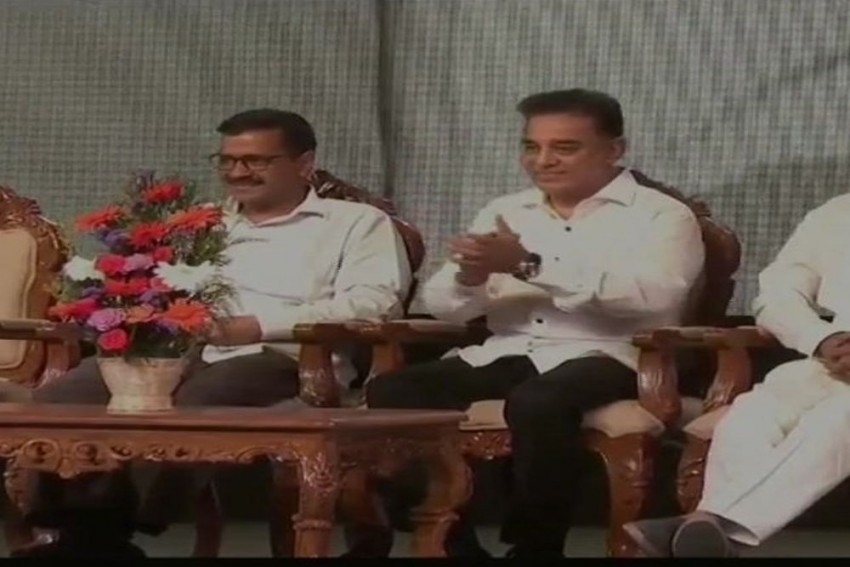 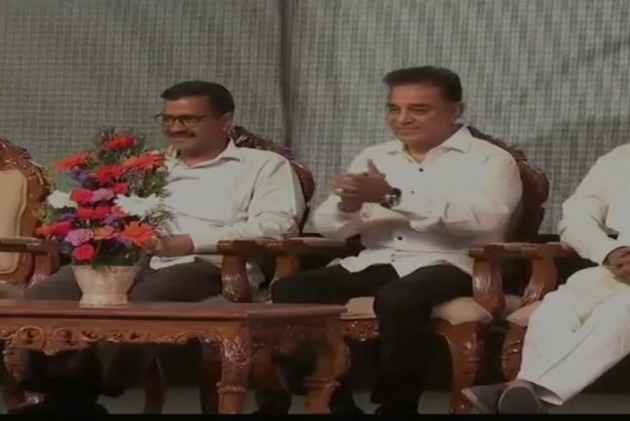 Though it has a flat ring to it, the party name is a departure from the past as it has eschewed from using the word “Dravidian” which had become a common and even compulsory appendage of most political parties in the state.

The newly founded MAKKAL NEEDHI MAIAM is your party. It’s here to stay, and to make the change we all aspire for. Guide us to serve you. #maiam #makkalneedhimaiam
official website: https://t.co/cql8kgqGkk
fb: https://t.co/2Gz1xRg5vf
twitter: https://t.co/J9ywXrunOb pic.twitter.com/Xza62w4DcC

"You must be an example to the present day political system and I will be seeking your suggestion rather than giving you speeches, Haasan told his fans while launching the party.

Delhi chief minister and AAP founder Arvind Kejriwal and former AAP Minister Sobhana Bharti along with P.R. Pandian a farm leader from Tamil Nadu were the special invites who flanked Kamal during the launch.

Before climbing up the massive dais Kamal Hassan unfurled the party’s flag –  a black star, circled by hands gripping each other against pure white background. In a short speech after announcing the party name Kamal was confident that his party would be blessed and courted by good friends. He explained that the social work carried out by his fans would acquire a greater meaning with the political journey he has undertaken.

“What is happening today is only a mere sampling. It is just a small portion of rice cooked in the heat of anger against all the injustice that has been happening. The hot rice that we have cooked would scald the soiled hands. And more such rice would be cooked and served across the state,” Kamal said in his brief address, promising to elaborate later in the evening.

Earlier in the day Kamal began his political journey from the house of former president Dr Abdul Kalam at Rameswaram after taking the blessings of Kalam’s elder brother Muthu Meeran Marikkar. He paid his repsects at Kalam’s memorial before his road journey to Madurai – about 170 kms away. En route he addressed meetings at Ramanathapuram, where Kalam had studie high school and at Paramakudi, Kamal’s hometown.

"Greatness can come from simple beginnings. Actually it will come only from simplicity. Glad to start my journey from a great man's simple abode," he said in a tweet on his visit to Kalam's residence where a large number of his supporters gathered.

Earlier, he briefly interacted with Maraikkayar. Kalam's family presented a memento carrying an image of the former president to Haasan.

He also paid homage at the memorial of the 'missile man' at Peikarumbu.

However, Haasan's plans to visit a school where Kalam studied could not fructify as the local administration denied permission, saying it was "political" in nature.

He had planned to address the students of the school at 8 am. However, the Mandapam Assistant Elementary Education Officer denied permission on the ground that if politicians were allowed to talk to the school children, it would create confusion among the kids, official sources said.

But the actor-director said there was "no politics" in his visit to Kalam's house or the proposed one to the school.

"Kalam who came from a simple house is an important person for me.. A role model. I am happy to have gone there. It was a planned visit, there is no politics in the visit to his house," he later told reporters here.

Haasan praised, among others, Kalam's patriotism and aspirations, saying he was attracted by such characteristics in him.

"A part of my learning is his life. That is why I went to the school. I wanted to go the school where he studied. There was no politics in the school visit also. They can prevent me from going to school but not from learning," he said.

Referring to the lyrics of a song from one of his films, Haasan said he was prepared to learn if he had to do so "by breaking barriers".

Asked what difference he saw between his avatars as an actor and that as a politician, he said the former has a bit of "barter system" in it.

"Cinema is a medium to connect with people and so is politics. But there is more responsibility as a politician. It was like barter system-there (in cinema) -- their (people's) money for my talent. But there is no such thing here (in politics)," he said.

However, there was more responsibility and honour in his new avatar as a politician, he said.

On being hailed by his fans and supporters as as 'Nammavar' (our man) ahead of his political plunge, Haasan said it amounts to people "owning me up as their man."

Haasan has starred in a film titled 'Nammavar.'

Replying to a question, he said anyone with a passion, time and desire to join politics should do so.

"Even you (journalists) should come to politics. Once advocates used to come to politics in large numbers... No body questioned... When actors come people question," he added.

Haasan said Andhra Pradesh Chief Minister N Chandrababu Naidu spoke to him last night and advised him to prepare a list of public welfare initiatives rather than spelling out policies.

He said he considered Naidu as one of his heroes in politics.

The veteran actor also said he had lived in the hearts of fans but now wanted to live in people's homes in his new role.

To a question on why he did not take part in Kalam's funeral, Haasan said, "I don't attend funerals. My belief is like that."

During his visit, the actor also interacted with members of fishermen community and said though he was aware of their problems through media, he wanted to hear it from themselves.

"Henceforth, it will happen so," he said hinting at more such frequent interactions.

After the media interaction, Haasan left for Madurai, about 170 km from here, and would address the public at some places, including his native Paramakudi, en route.