The Jammu and Kashmir Police on Monday registered a case against Sushil Pandit for tweeting false information about a militant attack on the CRPF and killing of five personnel at Pampore.

The move came days after the Central government announced a unilateral conditional ceasefire in Kashmir during the Muslim holy  month of Ramzan, suspending all operations against militants.

“The Kashmir Police booked the twitter user after he posted a rumor from his twitter handle. The police took cognizance of the matter when it observed that tweet amounts to an offence under law,” a police spokesman said.

The police have registered a case in this matter at Pampore police station under FIR No: 49/2018 under section 505 RPC.

“Investigation in the instant matter has been initiated to ascertain the facts pertaining to the case,” the spokesman added.

“The police have also directed a communication to the authorities in Twitter India requesting them to provide the details of this particular twitter user so that he is made to face the law,” the spokesman said.

While questioning the Ramzan ceasefire, Pandit tweeted this fake news: 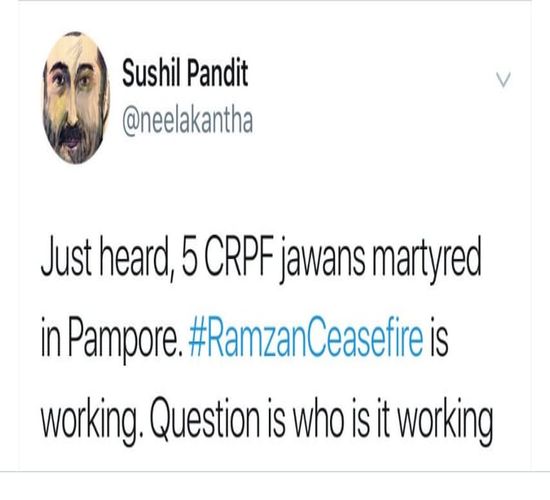 On Monday morning, former Jammu and Kashmir chief minister Omar Abdullah demanded an action against the Pandit over the tweet.

“Given that NO ONE else has this 'news' I think it’s safe to assume this is fake news spread with a malicious intent, the subtext being Muslim terrorists have killed Hindu CRPF jawans. These sorts of blatant lies must face legal action,” Omar tweeted.

Given that NO ONE else has this “news” I think it’s safe to assume this is fake news spread with a malicious intent, the subtext being Muslim terrorists have killed Hindu CRPF jawans. These sorts of blatant lies must face legal action. pic.twitter.com/Y61SmfuRtD

On May 16, the Union home ministry asked security forces not to launch operations in Jammu and Kashmir during Ramzan to help Muslims observe the holy month in a "peaceful environment.”

Early this month, a tech consultant Ashish Kaul was booked by Jammu and Kashmir Police for calling for rape and trafficking of Kashmiri women.

He was also suspended from his job at a US-based multi-national company.

On May 12, the police lodged an FIR against Kaul, whose family migrated from Kashmir in 2012, at Kothi Bagh police station, over his hateful tweets.

Kaul worked with the India branch of Development Dimensions International (DDI), a management consultancy service. The company had said it was shocked and saddened by the nature of his posts.