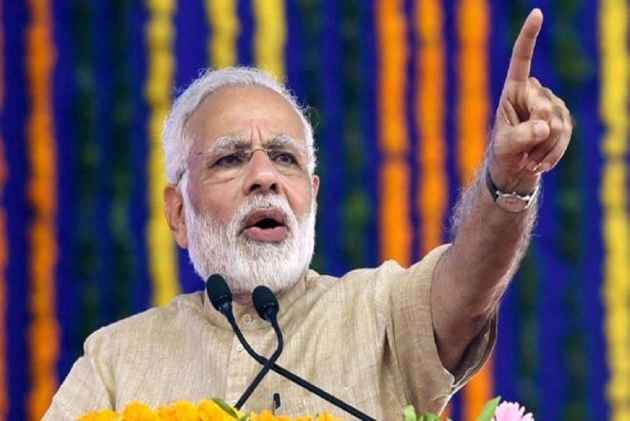 Prime Minister Narendra Modi today dubbed the Siddaramaiah government in Karnata as "seeda Rupaiya sarkar, saying it should not be allowed to continue 'even for a minute'.

"It is now certain that this Karnataka government will go," he said, asserting that there was public anger against the Siddaramaiah regime.

The rally was organised to synchronise with the 75th birthday of state BJP President B S Yeddyurappa, who is being projected as the party's chief ministerial candidate for the upcoming assembly elections in the state.

Charging that everything was happening for a price in Karnataka, Modi mocked the Siddaramaiah government as "a seeda Rupaiya sarkar".

Stepping up his attack on the Siddaramaiah government on graft and blaming the Congress culture for the ills facing the country, Modi said the situation had now come to such pass that because of the "weight of their own sins, let alone Karnataka, they will not be able to save the Congress."

"You see across the country. Whenever the people have got an opportunity they have first removed Congress. Because the country has come to know that the root cause for all our ills is Congress’ culture and when there is congress culture, every thing that we see is not good…..Nothing good we can see," he said.

In Karnataka, Modi said, the people were eager to see the exit of the Siddaramaiah government.

This was the third visit of Modi in about a month to Karnataka, where the party is seeking to return to power in the elections, expected to be held in April/May.

"In this country there was never a raid on residence of any sitting minister. Here in their houses you get diaries, money. You get bundles of notes from houses of leaders. Where did this money come from?"

"...Whose money is this? If this is not seeda Rupaiya what it is?," Modi said, apparently referring to the raids conducted by the Income Tax department on a state minister and a close aide of the chief minister last year.

"The kind of destruction that has happened in Karnataka, such a government should not be allowed to continue even for a minute," Modi said.