IF ISIS had approached the borders of Israel this week, nobody in the country would have noticed. Israel was riveted to a court-room drama. 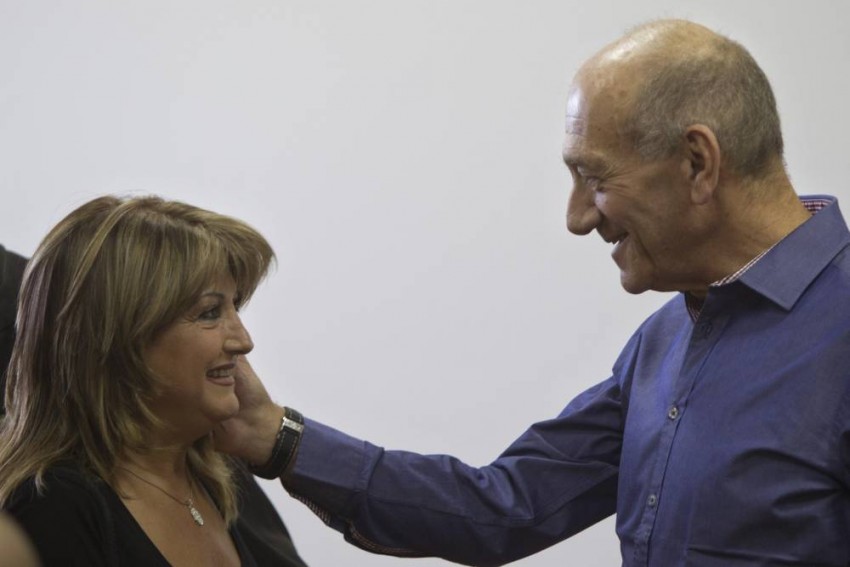 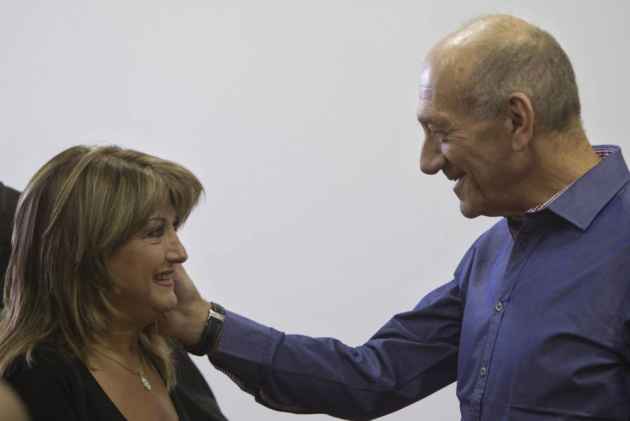 IF ISIS had approached the borders of Israel this week, nobody in the country would have noticed. Israel was riveted to a court-room drama.

There, in the Jerusalem District Court, former Prime Minister Ehud Olmert faced his erstwhile secretary, Shula Zaken. No one could take his or her eyes off them. It was the stuff soap operas are made of.

SHULA WAS a 17-year old Jerusalem girl when she first met Ehud. He was a fledgling advocate, she was a new secretary in the same office.

Since then, for more than 40 years, Shula was the shadow of Ehud, a fiercely loyal secretary who followed her ambitious boss from station to station— mayor of Jerusalem, then Minister of Trade, and finally Prime Minister. She was his closest associate, his confidante, everything.

And then it all blew up. Olmert was accused of several big corruption affairs and was forced to resign. For years now he has been a fixture in the court rooms and TV court reports. Shula Zaken, now a 57-year old rather stout matron, is his co-defendant. She supported him through thick and thin, until in his testimony he put all the blame on her. Shula was sent to prison for 11 months. Ehud was (again) acquitted.

That was the turning point. It appeared that for years the devout secretary had recorded her boss's private conversations with her. According to her, because she could not live without being able to listen to his voice at any time. Others saw in it as a kind of life insurance.

And indeed, this week, after Shula made a deal with the prosecution, the court listened to a whole stack of recordings, which may well send Olmert to prison for many years.

The drama between the two was irresistible. It headed the news, pushing almost everything else off the table. Few dealt with the real importance of the affair.

The recordings showed an all-pervading atmosphere of corruption at the highest level of government. Large bribes moved around as a matter of course. The relationship between the tycoons and the prime minister was so intimate, that the leader could request any tycoon by phone to transfer tens of thousands of dollars to his secretary to pay for his personal life in luxury and then for her silence.

The recordings do not show what the ultra-rich got in return. One can only guess.

It seems that the same symbiosis between top politicians and the "wealthy" (the American synonym for stinking rich) prevails in the US. In this respect, too, the similarity between the two countries is growing. We have indeed common values— the values of the tiny group of plutocrats who employ the top politicians in both countries.

WHILE EVERYBODY stares at the court scenes, who is there to watch what is happening beyond our borders?

Some 2400 years ago, the Gauls were about to mount a night time surprise attack on Rome. The city was saved by the geese of a temple on Capitol Hill, which raised such a ruckus that the inhabitants woke up in time.

We have no temple and no geese to warn us, only some intelligence agencies with a consistent record of failure.

ISIS is far away. We have enemies galore, who are much nearer: Hamas, Mahmoud Abbas, "the Palestinians", "the Arabs", Hizbollah, and -somewhere beyond— "the Bomb" (a.k.a. Iran).

To my mind, none of these are an existential danger for us. ISIS is.

AS I have said before, ISIS ("the Islamic State") poses no military danger. The present and former generals who shape Israel's policy can only smile when this “danger” is mentioned. A few tens of thousands of lightly armed fighters against the huge Israeli military establishment? Ridiculous.

Israelis, like Americans, are practical people. They don't appreciate the power of ideas. They think like Stalin who, when warned of the Pope, asked: "How many divisions does he have?"

It is ideas that change the world. Like those of the legendary Moses. Of Jesus of Nazareth. Of Muhammad. Of Karl Marx. How many divisions did Lenin have, when he crossed Germany in the sealed train?

ISIS has an idea that can sweep the region: to do what Muhammad did, to restore the Caliphate which ruled from Spain to India, to wipe away the artificial borders that divide the Islamic world, to drive away the pitiful and corrupt Arab rulers, to destroy the infidels (including us).

For millions upon millions of young Muslims in their impotent and impoverished failed states, this is an idea that straightens their back and swells their breast.

Ideas cannot be detected by spy drones. They cannot be blown out of existence by heavy bombers. The American conviction that you can solve historical problems by bombing from the air is a primitive illusion.

IT IS an old Israeli complaint that whenever something goes wrong in our region, Israel is always blamed. Take Sabra and Shatila. As our then Chief of Staff exclaimed: "Goyim kill goyim and the Jews are blamed."

Once more. ISIS has nothing to do with us. It is a purely Islamic affair. Yet many people blame Israel.

However, this time the blame is not without reason. Israel considers itself an island in the region, the famous "villa in the jungle". But that is wishful thinking. Israel is located in the middle of the region, and whether we accept it or not, everything that we do or do not do has a huge impact on all the countries around us.

ISIS' astonishing successes are a direct outcome of the general frustration and humiliation felt by a new Arab generation faced with our military superiority. The oppression of the Palestinians is felt by everyone in the Arab world.

(Yesterday I happened to see on TV an old Saudi movie about a high-school student who was punished by her teacher for riding a bicycle. The punishment was a fine "for our Palestinian brothers". The movie had absolutely nothing to do with Palestine.)

IF ISRAEL did not exist, ISIS would have had to invent it.

Indeed, somebody with a taste for conspiracy theories could well arrive at the conviction that Binyamin Netanyahu and his minions are secret ISIS agents. Is there any other reasonable explanation for their doings?

It is one of the main tenets of ISIS that the struggle against Israel is a religious war, at the centre of which is the Noble Sanctuary in Jerusalem.

For months now, a group of Jewish zealots has been kicking up a storm in Jerusalem by advocating the building of the Third Jewish Temple on the sites of the two Islamic shrines— the Dome of the Rock and the al-Aqsa mosque. This group is tolerated and even promoted by the police and the government, and makes news daily.

The Noble Sanctuary (or "Temple Mount") is one of the most sensitive spots in the world. Who in his right mind would upset the status quo and allow Jews to pray there, turning the political conflict into a religious one, just as ISIS desires?

These days, violent protests in annexed East Jerusalem are daily occurrences. The government has just passed a law that allows stone-throwing Palestinian teenagers to be imprisoned for nine years. That's not a typo: years, not months.

The recent Gaza war has stirred sentiments throughout the Arab world. The human and material losses suffered by the Palestinian population remain immense, as does the rage throughout the region. Who gains? ISIS.

And so forth. A constant stream of deeds and misdeeds designed to upset the Palestinians, all Arabs and the entire Muslim world. Food for ISIS propaganda.

WHY, FOR God's sake, are our politicians doing this? Because they are just politicians. Their sole interest is in winning the next elections, which may come sooner than the law requires. Keeping the Arabs down is popular. And the traditional contempt for all things Arab is blinding them to the serious dangers ahead.

ISIS may be the beginning of a new era in our region. A new era necessitates a re-evaluation of reality. Yesterday's enemies may become today's friends and tomorrow's allies. And vice versa.

If ISIS is now the paramount existential danger for us, we must reassess our policies comprehensively.

Take the Arab Peace Initiative. For years now it has been lying around, like a discarded sandwich paper. It says that the entire Arab world is ready to recognize Israel and establish normal relations with it, in return for the end of the occupation and a comprehensive Israeli-Palestinian peace agreement. Our government has not even responded. The occupation and the settlements are more important.

Does this make sense?

Peace with Palestine on the basis of the pan-Arab initiative would take much of the wind out of ISIS' sails.

If ISIS is now our main enemy, yesteryear's enemies become potential allies. Even the abominable Bashar al-Assad. Definitely Iran, Hizbollah and Hamas. Israel must reconsider its attitude to all of them.

When the Mongol invasion destroyed Iraq in 1260 and threatened the entire Arab world, the Crusader state opened its gates and let the Muslim army pass through it to march to Ain Jalut in the valley of Jezreel, where they crushed the Mongols in a battle which changed history.

ONLY AN Israel that makes peace with Palestine can join a new regional alignment to face ISIS, before it engulfs the entire region. This is a matter of survival.

Unfortunately, there is no great Israeli statesman in sight. Only the little Netanyahus, who are now riveted to the story of Ehud and Shula.