Modi's historic visit to Dhaka has re-opened an opportunity to develop a regional policy, where shared values, economic interdependence, and, geopolitical unity become the three pillars for a changing subcontinent. 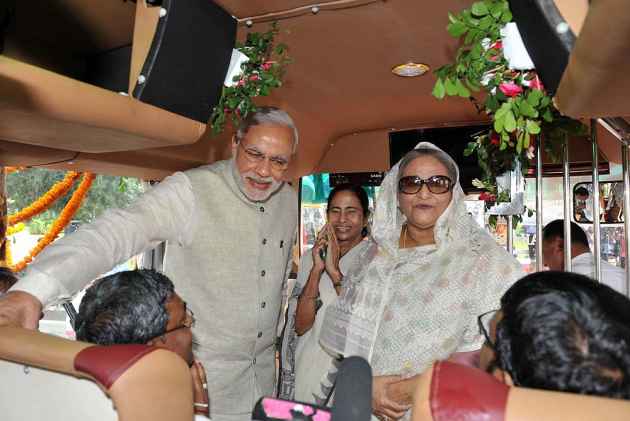 Since the early 2000s, India's regional policy has been operating in a framework that envisioned a South Asia that could plug into India's growth story. Leading policymakers called for an asymmetric approach to the neighbourhood, whereby smaller states could be offered incentives to benefit from India's economy without any immediate reciprocity in their foreign policies. The fact that external commerce fueled over 90 per cent of South Asian trade made such a pursuit of regional economic cooperation sensible and necessary.

But the belief that underpinned such a regional policy was like a businessman's model of statecraft. Premised on the classic idea of interdependence — whereby states that trade with each other will also learn to coexist peacefully — India's regional policy anticipated that India's neighbours would also internalise such a neoliberal worldview and grasp the "rational" path to friendship. But for several reasons such a transformation has evaded expectations. First, India's material capacity to meet the developmental needs of its neighbours has lagged behind alternative options that these states can acquire from external powers. One of the causes is India's weak industrial sinews and a generally diminished state capacity to offer meaningful developmental options in the neighbourhood, especially large infrastructure projects where China sought to fill the gap.

Second, and even more importantly, is the notion of national identity. In recent years, India's neighbours have found it possible to pursue their development goals without substantially disturbing their internal or geopolitical orientations, underscoring a fundamental flaw in India's narrow approach to its periphery. Can economic reasons be enough to transform the ideological and ideational complexion of the subcontinent? Recent empirical evidence re-affirms that interdependence can coexist with competing nationalisms. East Asia is the most recent example where very high levels of intra-regional trade and investment flows have not produced a common outlook on regional geopolitics and security. Clearly, it would take more than money to socialise the worldviews of South Asia's ruling elites to internalise secular and plural norms of statehood and a shared image of geopolitical unity.

Indeed, one legacy of the last decade has been an ambivalence in India's strategic community and civil society towards a fundamental question: should India care about the internal configurations of its neighbours? One argument is that while India should be sympathetic to secular regimes, it is economic relations that transform inter-state relations, and, India should focus on geoeconomics and leave culture and geopolitics as an organic after-effect. A competing argument claims that geopolitical choices emanate from a state's identity and a ruling elite's belief system, and, if these core values are incompatible with India's, a co-operative and cohesive periphery will remain elusive. The actual state of South Asian politics suggests the second argument must be taken seriously.

To be sure, India cannot unilaterally neutralise the influence of radical Islam in Bangladeshi politics, just as it cannot completely reform Sinhala chauvinism towards the Tamil minority in Sri Lanka. But this should not imply a passive acceptance of a political process that produces radical or regressive regimes. Surely, India can lend its weight to progressive forces in the neighbourhood, wherever they are embodied — political parties, civil society or the intelligentsia? After all, this is the essence of regional leadership.

But it is also true that norms and values are not uniformally internalised across states. States must possess an internal receptivity to new ideas. For example, Pakistan's core identity since its inception has been an extreme negation of India's secular identity, and, Pakistani elites are unable to imagine an alternative identity that can also justify the existence of their state. Given the absence of internal traction within Pakistan, India can do little to re-socialise or reform Pakistan's worldview. This has complicated India's Pakistan policy in recent years where an optimistic expectation of a shared outlook in the embryonic democratic process is repeatedly belied by the re-assertion of Pakistan's core schizophrenic identity.

Fortunately, and in sharp contrast, Bangladesh despite its tumultuous history does possess an internal ideational traction that can be traced back to its constitution, and, has a secular elite that came into being after 1971. India made enormous sacrifices and took big geopolitical risks supported by Russia to hold off America, China and Pakistan to make Bangladesh's liberation struggle a reality. It is this idea and shared legacy that India is seeking to recover and buttress in recent years in its engagement with Dhaka. The symbolism of 1971 was palpable through the Modi visit with the joint declaration calling for both sides "to preserve the memory and legacy of the Great Liberation War and the freedom fighters."

In a recent seminar held in Delhi, Bangladesh's State Minister for Foreign Affairs Shahriar Alam noted the "need to be careful against anti-liberation forces" implying that radicalism continues to pose a threat to Bangladesh's quest to craft a stable national identity. India's policy has to be determined, and, implemented via a combination of state, economic and civil society instruments. During this process, India may confront risks and setbacks if regressive and unfriendly forces win an occasional electoral contest. But that's part of the game of being a regional power. India is too deeply affected by the internal politics of its neighbours to passively witness an organic political evolution of the subcontinent.

A peaceful and friendly periphery can only emerge if radical, illiberal forces are de-legitimised in the South Asian discourse. The renaissance in India-Bangladesh relations offers a glimpse into a future subcontinent built on a secular ethos and geopolitical unity. India must ensure that Bangladesh becomes the very anti-thesis and counter-image of Pakistan thereby redeeming the true identity of South Asia, which was ripped apart in 1947 by the communal-driven agenda of partition and its imperial sponsors.