At the close of third day's play, Australia were 132/4 with Usman Khawaja and Tim Paine unbeaten on 41 and 8 respectively. 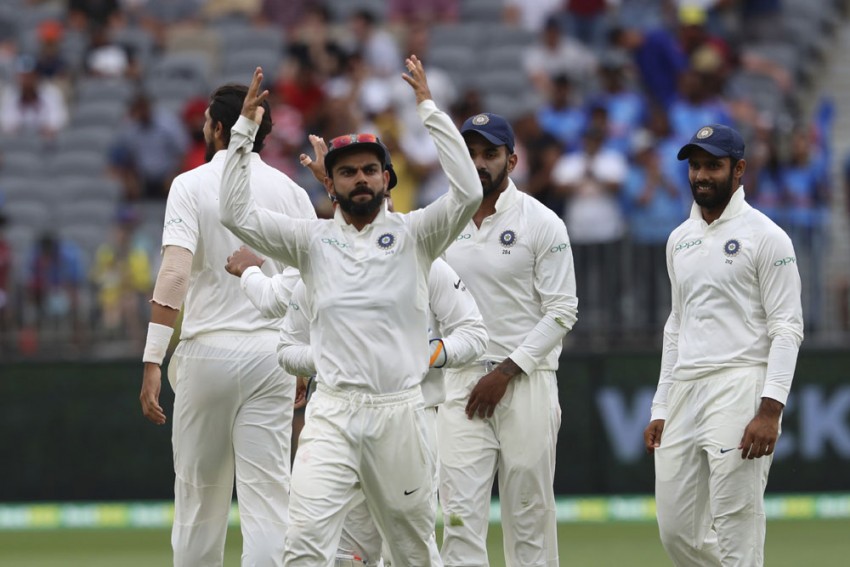 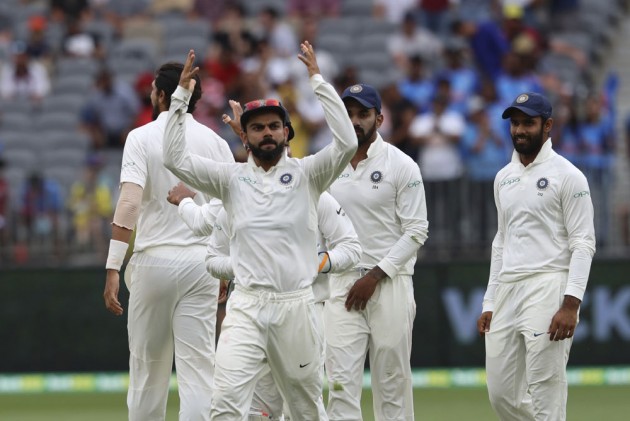 On an intriguing day of Test cricket, India failed to cash in on skipper Virat Kohli's century with spinner Nathan Lyon leading the Aussie charge at Perth.

At the close of third day's play of the second Test of the 2018-19 Border-Gavaskar Trophy series, Australia were 132/4 with Usman Khawaja and Tim Paine unbeaten on 41 and 8 respectively. The lead is 175 runs.

In their second innings, the hosts' opening pair struggled to get going as the Indian pacers used the new ball to good effect.

Harris got a life in the fifth over, when Cheteshwar Pujara dropped him at first slip off Ishant Sharma.

Post Tea, Aaron Finch (25 retd hurt) didn't come out to bat after being hit by Mohammed Shami (2-23) in the 13th over. He retired hurt but scans cleared him of serious damage on his right hand's index finger.

It was a fiery spell of fast bowling from the Indian pacers. Marcus Harris (20) too had been hit on the helmet earlier in the eighth over off Jasprit Bumrah (1-25).

The opener, dropped on 1 off Ishant Sharma (1-33) at first slip by Cheteshwar Pujara, added 26 runs with Khawaja.

Harris was bowled off Bumrah in the 18th over, attempting to leave the ball, assuming it would move away only for it to crash into the stumps. It became two wickets in four overs as Shaun Marsh (5) was caught behind off Shami.

India lost their last three wickets for 31 runs to be bowled out for 283, conceding a 43-run lead.

Nathan Lyon (5-67) took his 14th five-wicket haul in Test cricket as Australia took a 43-run lead in the first innings.

Post Lunch, India's first innings lasted only another 12.3 overs as the long tail refused to wag for the third time this series.

Ishant Sharma (1) was the first to go, offering a simple return catch to Lyon in the second over after resumption of play.

Rishabh Pant (36) changed gears and tried to attack the Australia bowling, adding 25 runs with Umesh Yadav (4 not out) for the ninth wicket, before holing out off Lyon again.

The off-spinner then proceeded to pick his fifth out of seven Indian wickets to fall on the day as Jasprit Bumrah (4) was caught at slip. In doing so, Lyon equalled Sri Lanka's Muttiah Muralitharan with seven five-wicket hauls against India in Test cricket.

Earlier, the Indian skipper scored 123 runs with the help of 13 fours and a six, the first hundred in Perth since Sachin Tendulkar's effort back in 1992 (114 at WACA Ground).

From overnight 172 for three, India made a torrid start to the day as Ajinkya Rahane (51) was caught behind off Nathan Lyon (2-50) on the fourth ball of the first over.

The ball didn't turn as much as he anticipated and only managed to edge it behind.

India had added only one run at that moment, which put an end to the 91-run partnership between Kohli and Rahane for the fourth wicket.

Hanuma Vihari (20) though was up to the task of batting out the next passage of play, as he put on 50 runs with the skipper for the fifth wicket.

He soaked up pressure at one end, even if not scoring too many runs, while Kohli went about his business at the other end as India garnered 42 runs in the first hour of play despite Rahane's early wicket.

In doing so, Kohli took India past 200 in the 80th over, and then reached his hundred off 214 balls. It was his sixth Test hundred on Australian soil, and he became the second-quickest batsman in Test history to score 25 Test hundreds (in 127 innings) after Sir Donald Bradman's 68 innings.

This was also his 34th hundred as India skipper across formats, second only to Ricky Ponting's 41 centuries as Australian captain.

The celebrations though were cut short as Australia used the second new ball to good effect with Vihari caught behind off Josh Hazlewood (2-66) in the 86th over.

Pant then joined his captain in the middle, and played an uncharacteristic innings unlike Adelaide, adding 18 runs for the sixth wicket as India crossed 250 and started closing the gap on Australia's first innings’ total of 326.

But Kohli fell before lunch, edging Pat Cummins (1-54) to second slip where Peter Handscomb just got his fingers under the ball. TV replays were not sufficient enough to overturn the on-field umpire's soft signal of dismissal.

The visitors lost another wicket in this short passage as Mohammed Shami (0), again batting ahead of Ishant, edged Lyon behind first ball.