Dhoni received probably the biggest jolt of his career when the MSK Prasad-led selectors decided not to include him in the T20I squads for the next six matches against the Windies and Australia. 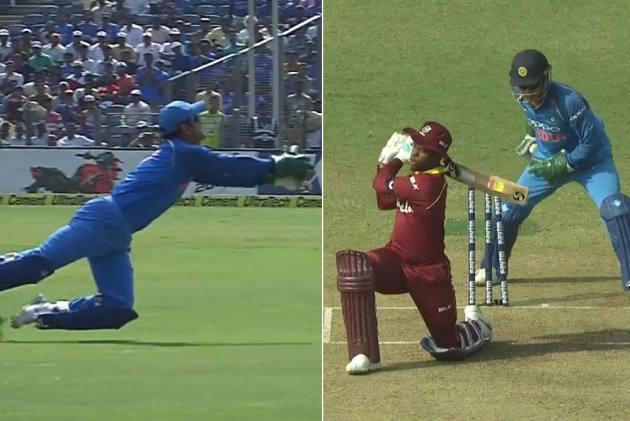 Less than 24 hours after Indian selectors dropped him from the T20I squads for the upcoming series against the West Indies and Australia, Mahendra Singh Dhoni on Saturday produced a couple of brilliant dismissals.

In the sixth over of the third ODI match against the Windies at Pune, the 37-year-old from Ranchi showed exceptional fitness by covering some distance while chasing a top-edge from Chandrapaul Hemraj off the bowling of Jasprit Bumrah. Dhoni completed the catch, a full-length dive, near square leg boundary.

Diving @msdhoni! How good was that catch from MSD?

Then, in the 20th over, Dhoni showed his lightning-quick stumping to dismiss a dangerous looking Shimron Hytmyer off the bowling of Kuldeep Yadav. The Windies batman didn't leave his ground while playing a sweep shot, but he committed the fatal mistake of sliding his back-foot.

Alert and a live wire as always, @msdhoni was his usual self to pick the bails off that turned out to be a successful stumping.

Dhoni, who has played all but 11 of India's 104 T20I matches so far, received probably the biggest jolt in his career when the MSK Prasad-led selectors decided not to include him in the squads for the next six matches.