Jadeja enjoyed a good outing in front of his home crowd. The all-rounder first scored his maiden Test hundred, then went on to dismiss Ambris. 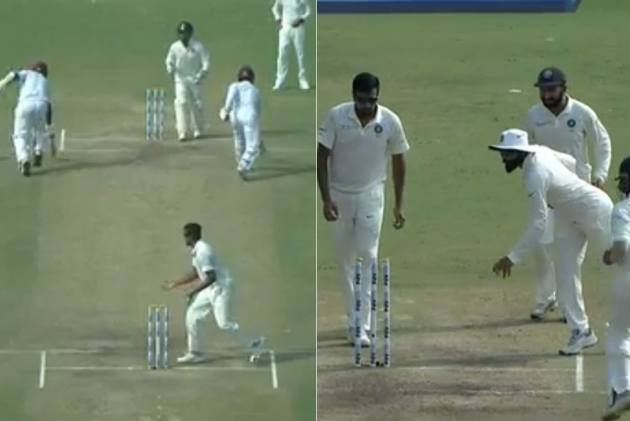 How many times have you seen both the batsmen running towards one end? Well, it happened during the second day's play of the first Test between India and West Indies at Rajkot on Friday.

In reply to India's massive first inning total of 649/9d, Windies got off to a disastrous start, losing both the openers inside the fifth over. Then Indian spinners came into play, with Ravichandran Ashwin removing Shai Hope in the tenth over.

Shimron Hetmyer and Sunil Ambris joined hands and were looking to start a new partnership, but a comedy of errors ended the partnership even before it started.

Hetmyer played the fifth ball of the 12th over, bowled by Ashwin, towards mid-on and called for a quick single. But an alert Jadeja swopped in an pretended to relay the ball at the wicket-keeper's end.

Jadeja enjoyed a good outing today in front of his home crowd. The all-rounder first scored his maiden Test hundred, then went on to dismiss Ambris.

At the close of second day's play, Windies were 94/6 after 29 overs' play, still 555 runs behind India's massive first innings total.