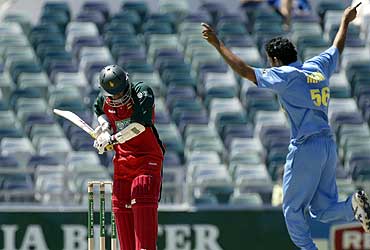 A jittery India made heavy weather of a modest target before recording a four-wicket victory over Zimbabwe in the last league match of the triangular series at Perth today.

After young colt Irfan Pathan had produced a fiery fast bowling spell to skittle Zimbabwe out for 135 in 34.4 overs, the Indian batsmen struggled to negotiate the bounce of the WACA pitch and lost six wickets before reaching the target in the 31st over in the inconsequential match.

Hemang Badani top scored with an unbeaten 34 but it was an innings the middle order batsman would want to forget quickly.

He was reprieved on eight and struggled to put bat to ball throughout his stay at the crease. He received a telling blow on the helmet and more importantly was involved in the run out of Rohan Gavaskar.

Yet he scratched around to score the winning run, a clip off the pads to fineleg boundary that put an end to his and India's nightmare.

Coming on the heels of the humiliating defeat to Australia on Sunday on the same track, the performance was hardly the kind of preparation Indians would have asked for the best of three finals which they have already qualified for.

For Zimbabwe, it was as close as it could get. They return home without a win in the series but they would take a lot of positives from today's match.

Stuart Matsikenyeri played a rearguard innings of 36 which helped his team from falling short of their previous lowest total of 133 against India.

Sean Ervine (23) and Stuart Carlisle (28) counter attacked bravely after the Africans had been reduced to 11 for three.

And the bowlers gave their heart out as they almost brought to halt the Indian juggernaut that has enjoyed a golden summer so far.

The day, however, belonged to the 19-year old Pathan who claimed four for 24, his best bowling performance in one-day internationals so far.

Pathan struck twice in the very first over to remove Vusi Sibanda and Tatenda Taibu for no score.

He then had Dion Ebrahim (7) caught by V.V.S. Laxman in the seventh over to send Zimbabwe spiralling to 11 for three.

Right arm seamer Amit Bhandari with three for 31 gave fine support as India exploited the hard seaming WACA wicket. The early loss of wickets cast doubts over Streak's wisdom of electing to bat on a pitch which saw the Indians being dismissed for a modest 203 against Australia two days ago.

The 63-run fourth wicket partnership between Carlisle and Ervine was the only phase when Zimbabwe offered some resistance.

But a brilliant piece of fielding by Yuvraj Singh, who beat Carlisle, backing up at the non-striker's end, with a direct hit, gave the Indians the vital breakthrough.

The rest of the batsman failed to achieve a double digit score and only extras of 24, including 15 wides, boosted their total beyond their lowest score in the series of 126 against Australia in the first match at Sydney.

Ervine was snared by Bhandari's bounce for a fine catch by Murali Kartik, substituting for Ashish Nehra, in the deep.

Nehra (1-39) had a dreadful start, slipping on delivery and conceding four fours in his first over. But the left-arm bowler later returned to strike a smooth rhythm and claim the wicket of Andy Blignaut.

Laxman's happy tour Down Under continued as he grabbed four catches in the innings, three of them off Pathan in the inconsequential match.

Laxman (32) also played a crucial knock that had a calming influence when the Indians were losing wickets in a hurry.

Blignaut then scattered the stumps of Dravid whose recent run of poor scores in the tri-series continued.

When Yuvraj fell at 73 for four, it seemed Zimbabwe had an outside chance to clinch that elusive win.

Laxman then was lucky to see his top edged pull shot spilled by Carlisle who had to run 20 yards from slip to fine leg. At the other end, Badani looked out of touch as he was appeared in two minds -- whether to go forward or backward.

Badani slashed a wide delivery from Friend straight to Streak but the Zimbabwe captain had the setting sun straight in his eyes and the ball sped through his hands to the point boundary.

A rising delivery from Ervine (2/29) then struck Laxman on the throat and rolled on to the stumps, to leave the Indians precariously placed at 105 for 5.

After 10 runs were added, Badani nodded to Gavaskar (4) and then sent him back, leaving the batsman stranded in the middle of the pitch.

But the unfortunate episode seemed to help him get a level of concentration. He flicked Blignaut to the square-leg fence and had the presence of mind to cover the tailend batsman, Pathan, with a penultimate ball single.

In the next over, when Ervine strayed on the leg, Badani promptly glanced him to fineleg for the winning runs.