India Owe It To Jaffer

Having been outplayed the first two days, the Mumbai opener's classy century (113 n.o.) allowed the visitors to fight their way back, taking a 85-run lead at 215-2. 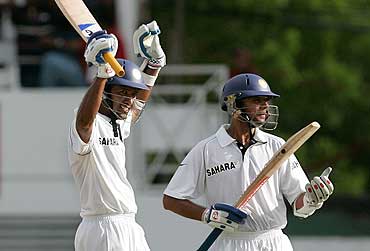 Wasim Jaffer hit a classy century to lead India's batting revival and help the visitors get back into contention in the first Test against the West Indies on Sunday.

Having been outplayed in the first two days, the Indians fought their way back into the match through a disciplined performance from the top order as they reached 215 for two in the second innings on the third day at the Antigua Recreation Ground.

The total meant India had an overall lead of only 85 runs but with Jaffer looking in excellent touch and skipper Rahul Dravid still at the crease, and the pitch playing its best, the tourists would be hoping to set a challenging target for the hosts.

Dravid was batting on a watchful 21 at close.

Jaffer's unbeaten 113, his second century in Tests, was instrumental in India erasing the 130-run deficit they had incurred after allowing Brian Lara's men to post 371 in the first innings.

In the course of his 222-ball innings, the Mumbai opener stitched three decisive partnerships.

First he combined with Virender Sehwag (41) to put up a solid 72-run partnership for the first wicket before pairing with VVS Laxman (31) to add 75 runs for the second wicket.

Jaffer's unbroken third-wicket association with Dravid was already worth 68 runs.

The West Indies were hard done by a hamstring injury to their bowling spearhead Fidel Edwards.

Sehwag and Laxman, however, were both guilty of gifting their wickets after having got their eye in.

Sehwag, whose 41 came from 58 balls with six fours and a six, edged an away going delivery from Corey Collymore to Chris Gayle at first slip.

Laxman, after facing 58 balls and hitting five boundaries, chose to heave at a wrong 'un from chinaman bowler Dave Mohammed and ended up top edging for a simple catch to mid-on.

Resuming at 318 for six, they batted for 16 more overs and added 53 runs before folding up at 371, half an hour before lunch.

The morning's play was notable for Punjab youngster Vikram Rajvir Singh's fiery spell which had two batsmen dismissed off deliveries which jumped from a spot.

Singh bowled quick and dug in a few nasty short-pitched deliveries which hit batsmen on the gloves and body.

VRV's first dismissal was that of obdurate overnight batsman Ian Bradshaw who batted for 111 minutes and faced 85 balls, scoring 33 runs with six fours.

Singh's other victim was Edwards (4) who squared up to a short-pitched delivery and ballooned a catch in the air, gratefully accepted by wicketkeeper Mahendra Singh Dhoni.

Kumble closed the lid on the innings when he won a leg before shout against Collymore for nought.

But the first breakthrough for the Indians was provided by Munaf Patel who removed overnight batsman Denesh Ramdin for 26 runs, coaxing an edge to Dhoni.

Ramdin batted for 90 minutes and faced 68 balls, hitting three fours, and added 49 runs for the eighth wicket with Bradshaw.

Jaffer though was grit personified as he preferred to hit in the 'V', yet produced a number of classic flicks and drives.

He completed his century in the final session with a classic cover drive.

Jaffer celebrated his return to Test cricket after four years with an 81 and 100 against England in the Nagpur Test and now has produced another back-to-wall effort for his team.

Even his hundred in the Nagpur Test was in the second innings and at a time when the team was fighting for survival.

This knock too has given Indians a very strong chance to escape with a draw.