The protesters alleged that the BJP was 'disrespecting the Constitution and murdering democracy' in the country. 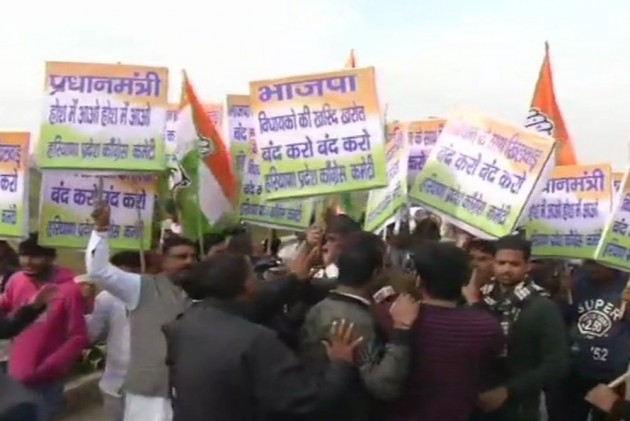 Amid turmoil triggered by charges of horse-trading flung at each other by the ruling coalition Congress-JD(S) and BJP in Karnataka, a group of Youth Congress workers Wednesday protested outside a resort in Haryana where the BJP's Karnataka MLAs have been camping in an "effort to thwart any poaching attempt" by the Karnataka government.

The protesters alleged that the BJP was "disrespecting the Constitution and murdering democracy" in the country.

Meanwhile, sources said BJP's Karnataka unit chief B S Yeddyurappa is likely to hold a meeting with the party MLAs who are camping at the resort and discuss the prevailing situation in the state.

They said the 104 BJP legislators will stay put till the top leaders in the party give their nod to return to Karnataka.

Mobile phones of the first-time MLAs have been "kept aside" to safeguard them against any poaching attempt, the sources said.

A political crisis in brewing in Karnataka, where two Independent MLAs Tuesday withdrew support to the seven-month-old ministry amid trading of poaching charges by the ruling coalition and BJP.

In a significant turn to the political war that erupted on Monday with both sides venting their fears of poaching, H Nagesh (Independent) and R Shankar (KPJP) wrote to Governor Vajubhai Vala, conveying their decision to withdraw their support with immediate effect.

Union minister D V Sadananda Gowda had said on Tuesday that the BJP would stake claim to power in Karnataka if the Congress-JDS coalition government falls.

Chief Minister H D Kumaraswamy however reiterated he enjoyed the support of 120 MLAs and alleged that Yeddyurappa was making "futile attempts" to destabilise his government.

West Bengal Chief Minister Mamata Banerjee alleged reacted to the crisis, saying that in Karnataka, the BJP was playing its old game of poaching legislators of other parties.

"It won't look nice for me to comment on the situation there. There are local leaders," Banerjee said.

Asked about allegations that the BJP was poaching other leaders, the Trinamool Congress supremo said, "This is an old game... there is nothing new. There had been similar things in some parts of Northeast and Goa."

The BJP have behaved like this earlier, Banerjee added.

The BJP on Tuesday rejected the allegation saying that the Opposition is trying to topple seven-month-old Janata Dal-Secular (JD-S)-Congress coalition government in Karnataka and hit back at opposition parties calling the current crisis their "internal problems".

"We are not doing any game. Why we should topple if they themselves are toppling their government? It is their problem. They have their internal problems and unnecessarily blaming us," BJP General Secretary and party's in-charge for Karnataka P. Muralidhar Rao said.

(With input from agencies)