The vulgar Bhojpuri songs targeting Rhea Chakraborty have been viewed several hundred times on the Internet and have subsequently garnered hateful comments against the actress. 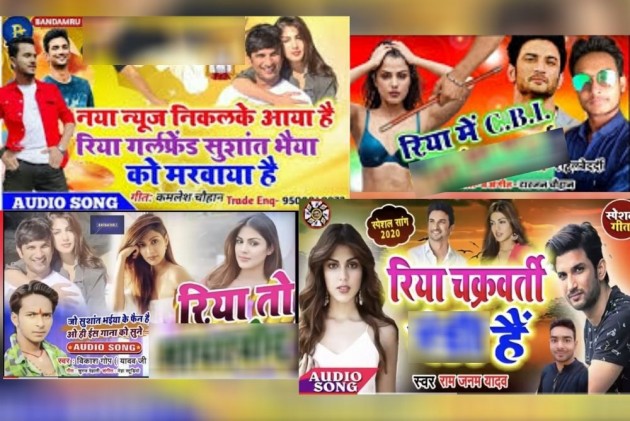 After incessantly dispatching doses of profanity-laden Bhojpuri songs on almost every subject, the Bhojpuri Music industry is now milking the death of actor Sushant Singh Rajput who hailed from Bihar. And with this, Bhojiwood has found a new theme to produce a new crop of obscene, vulgar and lewd songs. With 'Justice for Sushant' hashtag, YouTube is rife with several songs that are obscene in nature and vilifying Rhea Chakraborty, prime accused in Sushant Singh Rajput death case. Some singers are even dubbing this move as a fight for justice for Sushant Singh. But in this attempt, the industry has stooped to a new low.

“Rhea Chakraborty is a prostitute,” reads a lyrics of a new Bhojpuri song on YouTube, which has garnered 14 thousand likes and over 4 lakh views. This song was sung by Ramanujam Yadav. Another song with lyrics “Rhea Chakraborty ko Faansi Do” (Send Rhea Chakraborty To gallows) is one of the many profanity-laden songs on the subject of Rajput’s death that has garnered thousands of views.

In this entire episode, it’s not only Rhea who is being abused and villified in these Bhojpuri songs but filmmaker Karan Johar, Salman Khan, Mahesh Bhatt and Alia Bhatt too have been targeted in these songs.

Is Rhea Chakraborty Really Guilty? Here’s What These Prominent Voices Have To Say

A song “Rhea Tune Acha Nahi Kiya” is the brainchild of Rave Srivastava who has uploaded the song on YouTube under the banner of Shivkanth Entertainment -- a studio based out of Delhi’s Laxmi Nagar area and owned by 25-year-old Ankit Rai.

Speaking on the contents of the song, Rai said: “We are responsible only for recording and not for the vulgar lyrics. And before tarnishing the image of the Bhojpuri music industry, you should first look around for the vulgarity in songs produced by Bollywood and Punjabi music industry. They also produce vulgar stuff, but no one talks about it. What good things do you find in the songs written by Honey Singh? They are equally vulgar.”

On further browsing on the YouTube, one finds a polychromatic thumbnail with an image of bikini-clad Alia Bhatt and Karan Johar. It's a song with lyrics hurling abuses at both of them. Sung by Vibhu Pandey, the video has got 7,000 likes and more than 2 lakh views. This song is uploaded under the name of Madhubani-based Rupam Recording Studio’s YouTube Channel.

Rupam, 20, who runs this studio, told Outlook: “Sushant was the pride of Bihar. He was a Bihari Rajput and I am also a Rajput from Bihar. So I shared a special bond with him. To get justice for him, I felt I should put this song out on my YouTube channel, even though it was not produced by me.”

Rupam also added that he always suggests singers to omit words which are objectionable and obscene, but singers never budge because "with these words in lyrics, the song generates more views and likes."

Famous Bhojpuri singer Kalpana Patwory told Outlook: “Double-meaning songs are produced everywhere and in every region, but Bhojpuri music has stooped a new low. The credit goes to those people of this region who are making these songs a hit. I think the time is ripe to launch a crackdown on these songs.”

Another song “Kyo Mar Dali Rhea Mere Sushant Bhaiya ko” has generated more than 19 lakh views and got 23,000 likes on Shree Music World Studio’s YouTube Channel. The YouTube channel is owned by Ajit Shree from Patna. When asked about the song and its contents, he said: “I think one reason for vulgarity in songs is because of no censorship on Bhojpuri songs, no one take action against these songs. So anyone writes and sings anything.”

Shree said the young singers think that vulgar songs will get them a quick stardom on social media.