Home  »  Website  »  National  »  'We Are Still In Shock': One Year On, Fear And Agony Without End For Family Of 'Kathua Victim'

'We Are Still In Shock': One Year On, Fear And Agony Without End For Family Of 'Kathua Victim'

Eight people, including the custodian of the village temple in Kathua and two policemen, have been arrested for their alleged role in the crime that stunned the country with its brutality and polarised society along communal lines. 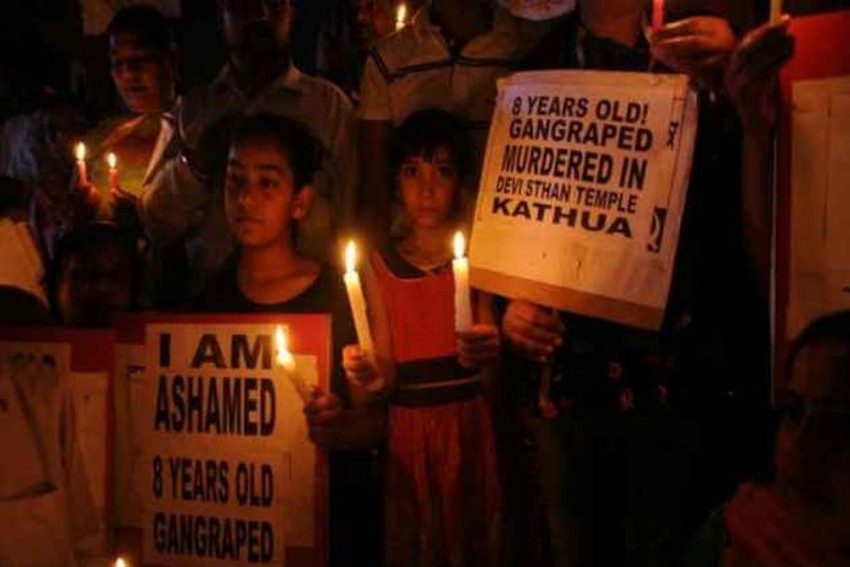 Children protesting against the Kathua rape and murder
File Photo
Outlook Web Bureau 2019-01-17T17:37:51+05:30 'We Are Still In Shock': One Year On, Fear And Agony Without End For Family Of 'Kathua Victim' 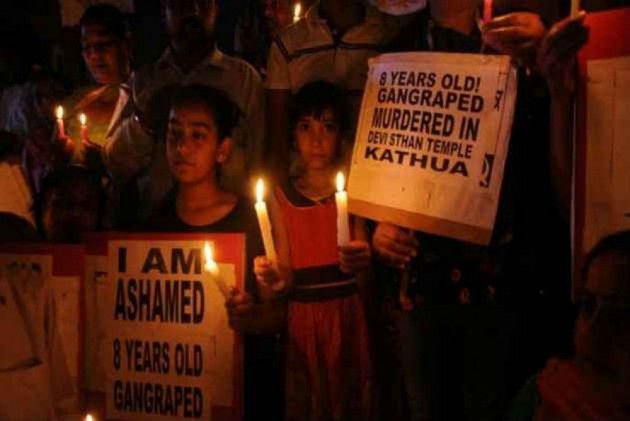 The headlines may have faded away but the fear is constant, the grief seemingly without end, says the family of an eight-year-old girl whose body was found in a jungle in Jammu and Kashmir's Kathua district on this day a year ago.

The case of the child from a minority nomadic community, who was allegedly abducted while she was grazing horses and kept in captivity in a temple where she was gang-raped before being bludgeoned to death, is nearing its final stages in a court in Pathankot in Punjab, officials said on Thursday.

Eight people, including the custodian of the village temple in Kathua and two policemen, have been arrested for their alleged role in the crime that stunned the country with its brutality and polarised society along communal lines.

While the law takes its course and the world moves on after the initial shock, for the family, the trauma continues, casting long shadows over their everyday lives.

"We are still in shock," said her father in a phone interview with PTI.

The family, which migrates to the higher reaches of Kashmir during the summer months, have returned to their village but normalcy is still a far cry.

"There is constant fear and I do not send my children outside. They remain confined inside the house... How can I send my other children after what happened?” he asked.

He said their anxious wait for a judgement continues.

"We lost our girl but I hope no parent has to undergo this kind of pain ever," he said.

The case went through several twists and turns, including efforts by the district police to "cover up" for the main accused, till the Crime Branch stepped in and came out with a charge sheet giving details of events leading to the horrific crime.

According to officials, the prosecution has closed its evidence at the sessions court at Pathankot, which is hearing the case on the direction of the Supreme Court.

The case is at the stage of charges being read out to the accused before the defence makes its final submission in the case of a child, who came to be known simply as the Kathua gangrape-murder victim.

The apex court shifted the case to Pathankot in May last year after the state as well as some lawyers approached it with a plea that they did not expect a fair trial in Kathua.

Sanji Ram’s nephew, a juvenile, was also arrested. His trial is yet to begin as police is contesting his claim of being below the age of 18.

The Pathankot court framed charges under various sections of the Ranbir Penal Code, applicable in Jammu and Kashmir, including 120-B (criminal conspiracy), 302 (murder), 376-D (gang rape) and 328 (causing hurt by poisoning with an intent to hurt).

The two policemen were also charged under Section 161 (public servant taking illegal gratification) of the RPC.

Sanji Ram is alleged to have hatched the conspiracy with other accused as a carefully planned strategy to remove the minority nomadic community from the area.

According to the charge sheet, she was kept sedated in the small “devisthan” and repeatedly sexually assaulted before she was bludgeoned to death.

On January 23, about a week after the body was discovered, the government handed the case to the Crime Branch, which formed a Special Investigation Team.

Sanji Ram surrendered on March 20 after his son was arrested from Uttar Pradesh a day earlier.

The charge sheet explained in detail how the accused police officials destroyed crucial evidence by washing the clothes of the victim before sending them to the forensic laboratory and created false evidence at the scene.

A supplementary charge sheet listed in chilling detail the cocktail of sedatives, including cannabis, forcefully given to the child.

She was given ‘mannar’ (local cannabis) as well as Epitril 0.5 mg on an empty stomach, it said.

"She was forcefully administered five tablets of Clonazepam of 0.5 mg each on January 11, 2018 which is higher than the safe therapeutic dose. Subsequently, more tablets were given...The signs and symptoms of an overdose may include drowsiness, confusion, impaired coordination, slow reflexes, slowed or stopped breathing, coma (loss of consciousness) and death,” according to the medical expert’s report submitted along with the charge sheet.

It said the tablets could have pushed her into a state of shock or coma.