Follow the diverse celebrations in Bihar where Chhath Puja - a composite culture, a shared festival and faith that is unbound and unshackled - comes to life.

For years, I have seen the women walk to the ghats with folded hands. At the ghats, I saw them half submerged in water with their hands raised in supplication towards the setting and the rising sun. All of this meant faith. It meant strength.

Chhath puja in Bihar is a beautiful time. My mother would tell us stories of Muslim families who observed the fast. She said faith is never about religion. It is about hope, about resilience.

Barring a couple of years when my aunts observed the fast, nobody ever celebrated Chhath in our family though we’d go to the ghats when we were kids and wait for thekuas.

Chhath Puja is a four-day-long festival where devotees fast for two days without water. The city is decked up and roads are sprinkled with water, and there are those Sharda Sinha songs that play on the loudspeakers.

This year, I went around looking for people who had held on to their faith. I found women from the Muslim community who make earthen stoves that are used to cook prasad during the festival. I found Muslim women whose wishes had come true. They had kept their promise to the deity and fasted during Chhath and offered arghya to the sun. One woman had wanted a son. She had twins. Males.

I am only collecting testimonies of a composite culture, of collective faith and of a shared festival. In times like these, such stories offer hope and solace.

I asked people about their wishes. A woman in the neighbourhood told me she took a vow that if her daughter gets married, she would celebrate Chhath. Her daughter, Ruby, was dark-skinned and back then people told her she would never get married. They were poor and the mother was worried about her daughter's prospects. Eleven years ago, Ruby got married. I remember that she looked like the spitting image of her grandmother. We always thought she was beautiful but the world is too color-coded. In any case, I went to see them and they told me that’s why Damyanti Devi started observing the fast during Chhath.

Stories like this tell us a lot about ourselves. These are snippets from a place where Chhath is perhaps the biggest festival. While it has become politicized in recent years given the vote-bank politics and the question of identity, Chhath is about people, their struggles, their simple wishes, their condition and their faith.

The Colour of Joy

Damyanti Devi’s daughter Rubi was told by her uncles that she had a dark complexion and that she would never get married. They told her to apply “chuna” (limestone) and take showers with hot water. But the tall and lean girl with very well-defined features, remained dusky (and beautiful). As was the case back then and as it remains even now, dark complexion is often looked down upon. Ruby’s mother had heard that wishes are granted by the deity if one keeps their faith and observes the rigorous fasting. And so, she began fasting.

Ruby did eventually get married, eleven years ago. She had come from her husband’s village in Uttar Pradesh to help her mother, who is now frail.

“I did it so that she would get married,” Damyanti Devi said. 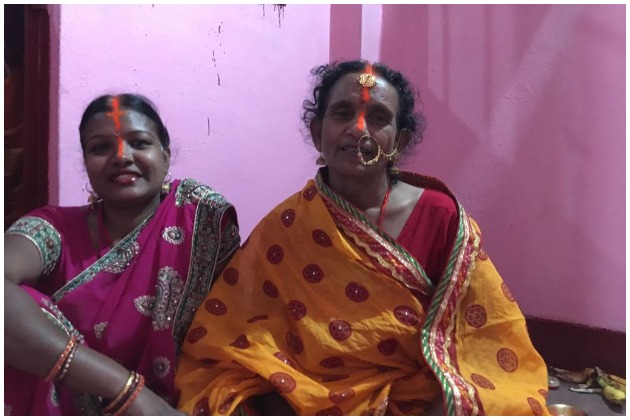 (Ruby (left) with her mother Damyanti)

Ruby doesn’t like the village. The mother said there are no cinema halls, no shops, no nice roads.

Damyanti Devi doesn't come from a rich family and the thought that her daughter may never get married must have weighed heavily upon her. At least as much as shame and stigma that haunts unmarried women and their families. Now, the world has moved on. "We are stuck in some other time zone though," Damyanti Devi said. 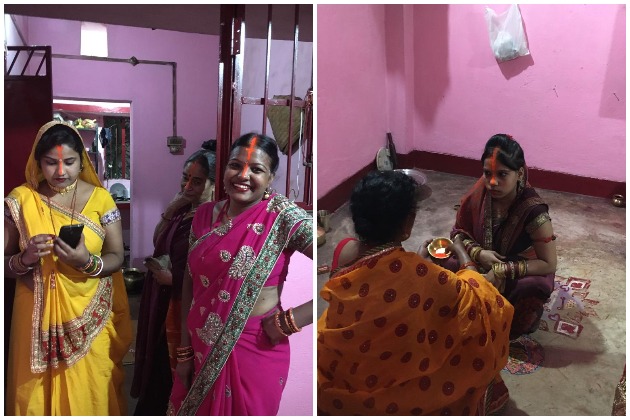 Muslim traditions of Chhath in Bihar

Shakila Khatoon was sitting outside her house waiting for Pairu’s wife. In Kamla Nehru Nagar, a slum in Patna, young men were ferrying around speakers and festoons to hang. It was Kharna and bird lights had been hung. Khatoon has made a wish for her son to be cured of his addiction, to what she refers to as “solution” to the Chhath deity. She said she would contribute to the offerings to the deity. She has this belief and has been holding on to it.

“You see Pairu’s wife’s wish got her wish,” she said.

She pointed out to the two children sleeping inside a one-room tenement.

She went on to say Pairu’s wife had three daughters and wanted a son. She made a vow that if she got a son, she would observe chhath for five years. She had twins the next year and she fasted and observed the festival for five years. Khatoon also went to the ghats and vowed to not eat meat for a month.

There were several Muslim families that observed Chhath in the neighbourhood.

“It isn’t about religion but about faith,” she said.

Pairu passed away last year. His wife walked over to the house and said she didn’t want to talk about it only because there is so much polarization now and she did not want to become a target for being a Muslim observed Chhath.

“They will say all kinds of things,” she said.

In Bihar, Muslims observing Chhath is not a new thing. Many families have observed the festival for many years. Pairu's wife is one of them.

Notes on Day I

Bridging over the divide

On the second day of the festival, the women and men who observe the fast cook kheer for prasad. 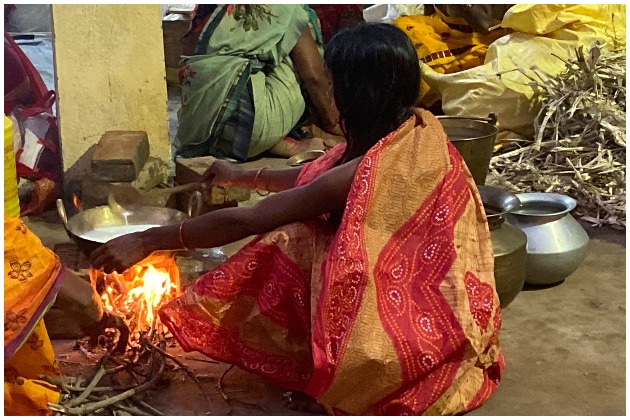 A few women were staying in a shed at the Darbhanga House on the banks of Ganges. Renu said she had come from Jahanabad and would stay along with several other families on the banks of the river. 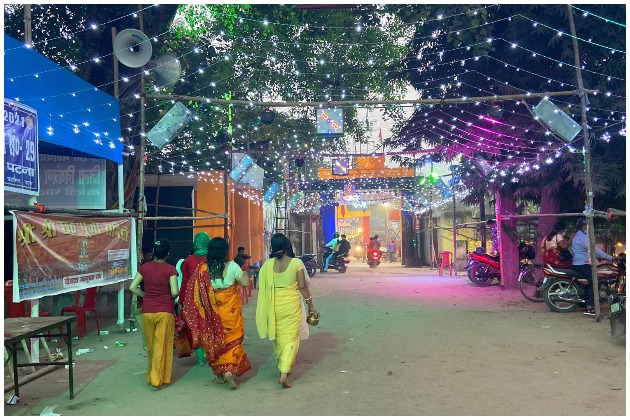 Tomorrow, they will offer their first arghya to the setting sun. Staying next to the river is auspicious. 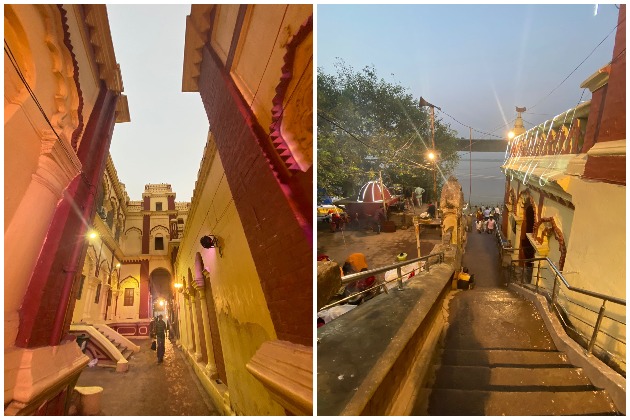 There is something about this city during this time.

I see Muslim women making mud stoves for the festival of Chhath. Women and men who are fasting during the festival cook their meals. The distribution of the prasad that is cooked on these chulhas begins today.

The four-day festival is observed by people across the faiths who worship the Sun. 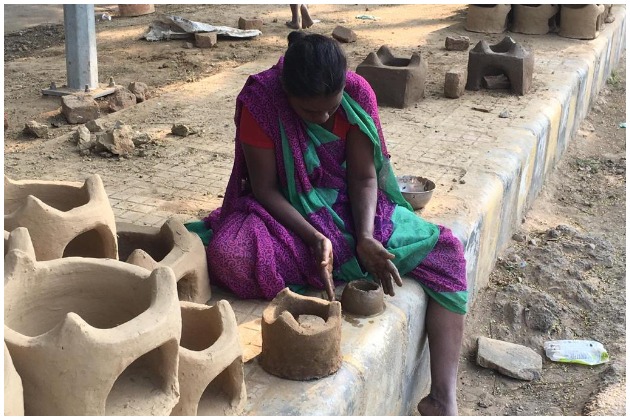 The women I met told me they abstain from eating meat during this time out of respect for those observing and celebrating the festival and even contribute money for the puja. 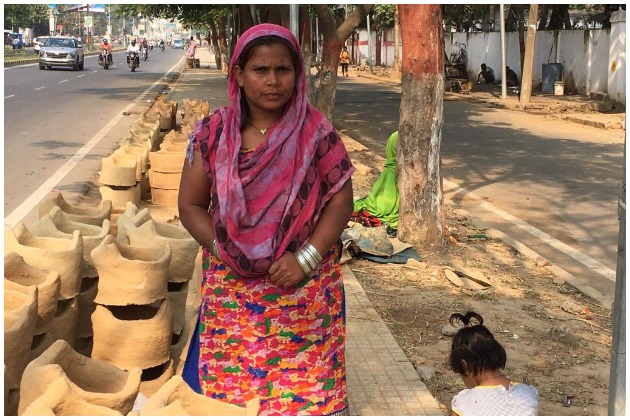 Faith is such a beautiful thing. And faith must not be bound to religion. In Bihar’s Saran district, many Muslim families observe the festival. 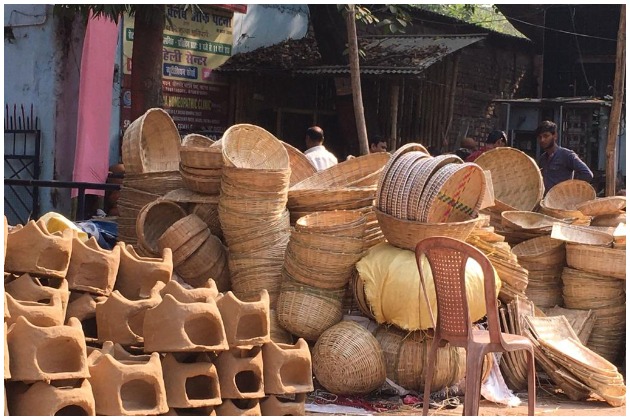 The four-day Chhath festival comes after Diwali. It began on Monday when devotees across the state bathed in a ritual called ‘Nahai Khai’, which will be followed by Kharna on Tuesday.

Follow the diverse traditions of Chhath in Bihar with Outlook.