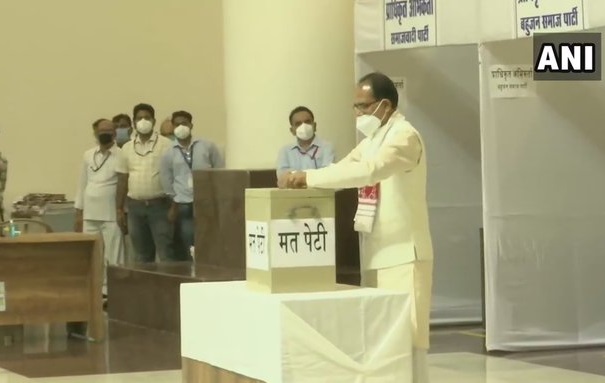 The ruling YSR Congress bagged all the four Rajya Sabha seats in Andhra Pradesh and seasoned campaigners like Digvijaya Singh, Jyotiraditya Scindia and Shibu Soren had an easy sailing as the results of the polls to the upper house were on expected lines barring Gujarat and Manipur which are set for a cliffhanger.

Voting was held for 19 seats spread across eight states amid all precautionary measures in view of the COVID-19 pandemic which led to two legislators in Madhya Pradesh and Rajasthan who were in quarantine turning up in PPE gear.

In Madhya Pradesh, the BJP won two seats and the Congress bagged one seat while in Rajasthan, it was the other way around with the Congress emerging victorius in two. The Jharkhand Mukti Morcha (JMM) won one seat in Jharkhand so did the BJP while the candidates of the ruling alliances won in Meghalaya and Mizoram.

Social distancing was followed and entry of the legislators were allowed after thermal screening and wearing of masks. As a precautionary measure, the election commission gave individual pen to the legislators for marking their votes.

In Manipur, which is in a political crisis following the resignation of nine members of the ruling coalition, BJP candidate and the state's titular king L Sanajaoba is pitted against veteran T Mangi Babu of the Congress in the only Rajya Sabha seat.

Counting of votes for four seats in Gujarat was delayed as the Congress demanded that the Election Commission invalidate two BJP votes on different grounds.

A senior official said that the EC observer rejected the opposition party's objections and referred the matter to EC's Delhi office for final decision.

The Congress objected to Chudasama casting his vote on the ground that his election was annulled by Gujarat High Court last month. The Supreme Court has stayed that order. As to Solanki's vote, the party claimed that an unauthorised person accompanied him inside the polling booth.

The BJP has fielded Abhay Bharadwaj, Ramila Bara and Narhari Amin, while the Congress has fielded Shaktisinh Gohil and Bharatsinh Solanki.

The ruling Congress in Rajasthan won two out of the three seats which went to polls. While K C Venugopal and Neeraj Dangi were declared elected, BJP's Rajendra Gehlot won comfortably while its second candidate Onkar Singh Lakhawat was defeated.

With this, the number of Congress's Rajya Sabha MPs from Rajasthan has increased to 3, out of total 10, and rest 7 seats are held by the BJP.

Out of the total 200 legislators, 198 members cast their votes. Two MLAs (Congress's Bhanwar Lal who is also a minister and CPI (M)'s Girdhari Lal) could not come due to health reasons.

Meanwhile, the BJP raised objection on the vote cast by Congress MLA Wajib Ali, who recently returned from Australia, saying he has violated quarantine norms.

However, he said he has already been tested negative for COVID-19 and cast his vote after wearing a PPE gear.

Soon after he cast his vote, a complaint was filed with Jyoti nagar police station demanding action against him under the epidemic diseases act.

Police said that the complaint will be probed. However, no FIR was registered.

While Singh is returning to the Rajya Sabha for second consecutive term, Scindia, his once arch rival in the Madhya Pradesh Congress who is now with the BJP, is entering the Upper House of Parliament for the first time.

A Congress MLA who has contracted coronavirus arrived in an ambulance, wearing Personal Protection Equipment gear. He was the last one to vote.

This will be Soren's third term as a Rajya Sabha member. Soren, whose JMM now governs Jharkhand, had also served as a Union minister. It will be Prakash's maiden term in the Upper House of Parliament.

The opposition Telugu Desam Party, which had forced the contest despite not having the numbers, lost badly, with its nominee Varla Ramaiah polling only 17 votes against its technical strength of 23 in the assembly.

MDA partner KHNAM's MLA Adelbert Nongrum abstained from voting to express his dissent against the NPP whose Lok Sabha MP Agatha K Sangma had voted in favour of the Citizenship Amendment Bill (CAB) in Parliament whereas the party in the state opposed it. One wote was found to be invalid.