Video Is Passe, How About Grabbing A Biography Of 'Bihar's Robin Hood' Now?

Published by Prabhat Prakashan, a leading Hindi publication house, the 128-page book, Sangharsh Se Utkarsh Tak (From Struggle to Pinnacle), has been written by writer Savita Pandey. The book worth Rs 150 is already available on Amazon ( Pre-Order) 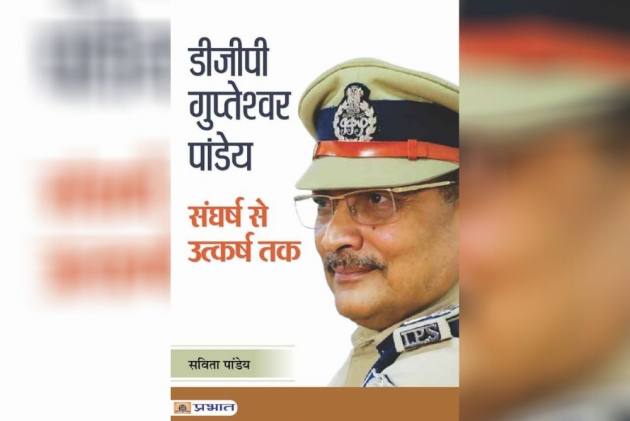 If you think one music video featuring him as ‘Robin Hood’ is enough to set the stage for his ostentatious entry into the rough and tumble of electoral politics in Bihar, you are mistaken. For, ex-DGP Gupteshwar Pandey appears to have more aces up his sleeves.

Pandey, who took voluntary retirement from service on Tuesday five months before he was due to officially hang his boots, apparently to contest the upcoming elections in his native state, has a biography ready to hit the stands which chronicles his rise from a nondescript village in Buxar district to the coveted chair of police chief in the state.

Published by Prabhat Prakashan, a leading Hindi publication house, the 128-page book, Sangharsh Se Utkarsh Tak (From Struggle to Pinnacle), has been written by writer Savita Pandey. The book worth Rs 150 is already available for pre-order for e-commerce platforms such as amazon.

The biography could not have come at a better time for Pandey, since he is all set to try his luck in the coming elections. Close on the heels of a controversial music video song, Bihar Ke Robin Hood, released by singer Deepak Thakur of Bigg Boss fame, the hagiography is intended to build his image as a do-gooder, who is joining politics 'just for the sake of his commitment to social service'.

“Conferred with monikers such as ‘Real Singham’, ‘Robin Hood’, ‘Dabangg’ and ‘Chulbul Pandey’, the 1987-batch IPS officer Gupteshwar Pandey is Bihar’s DGP,” says the introduction of the book on the publisher’s website. “Leader of community policing, DGP Pandey is very popular. His bindaas (carefree) manner of using social media to create public awareness and style of expressions are liked by people, especially the youth … His lifestyle is so ordinary and simple that people say he does not seem to be the DGP,” says the description which was apparently written before he took VRS.

Dedicated to the youth, the biography underlines the friendly policing style adopted by Pandey while also delineating the tough measures taken by him during his tenure as the police chief of the state. It also gives a message to students and youths as to how one can attain success in the face of extreme adversities, it adds.

According to the biographer, it is ‘an inspiring life story of a committed public servant who constantly worked to mitigate the sense of fear and distrust of the common man towards the police which, among other things, also underlines ‘how one can steer clear of arrogance despite attaining the position of DGP’.

The video on Pandey, which has crossed 2 lakh views in less than two days on YouTube, has been criticised by many as a blatant, pre-poll PR exercise. The Indian Police Foundation, for one, says that “a state DGP circulating such video is in poor taste, demeaning his office and uniform. “It sets a bad example for his juniors,” it tweeted. “It is also a violation of the conduct rule.”