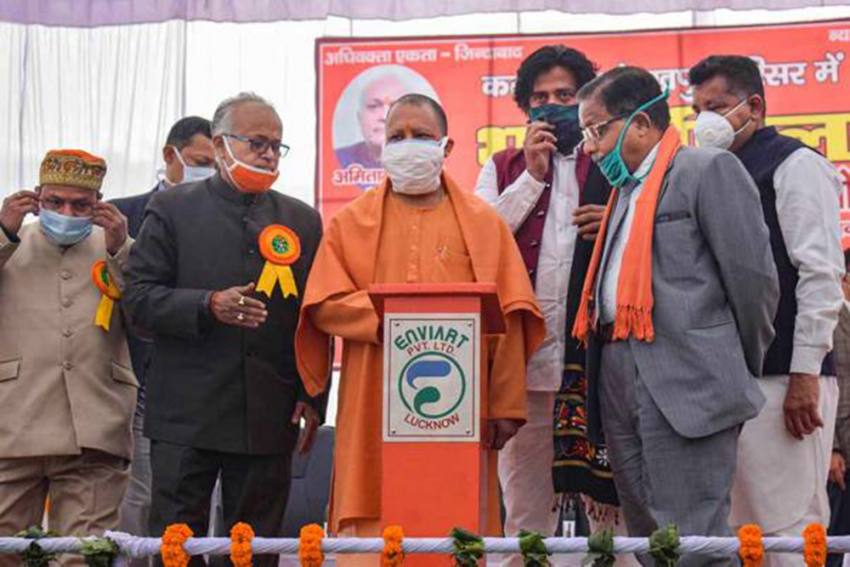 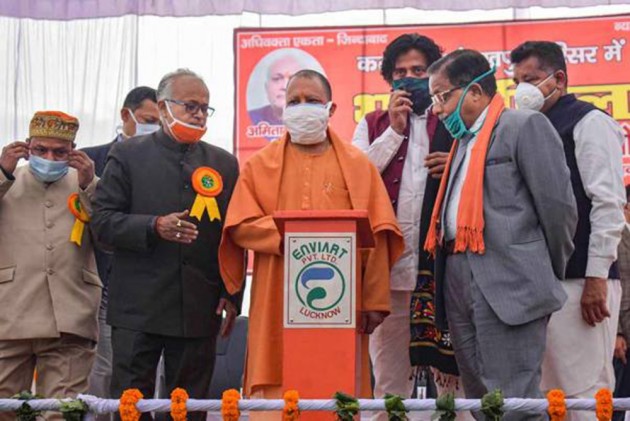 Brazil is one of the worst hit nations and it is still reeling under the pandemic with Covid-19 cases still rising in the country.

Referring to the Brazilian president’s tweet of an image of Lord Hanuman flying from India to Brazil with a mountain of the life-saving herb, Adityanath said Bolsonaro himself likened India's vaccine to ‘Sanjeevani Booti’.

"While saving lives of our countrymen, the Covid-19 vaccines are also reaching other parts of the world,” Adityanath said during his address on the occasion of 71st Uttar Pradesh formation day.

The CM also announced the launch of an ambitious, state-wide, free coaching facility programme to help students prepare for various competitive examinations. Named 'Abhyudaya', the free coaching facility will start from upcoming Basant Panchmi, the day of worship relegated to the goddess of learning, Saraswati.

Speaking about the free coaching facility, the chief minister noted that the educational infrastructure of various universities and colleges would be used for providing this facility to students in the state for which a panel too would be formed.

"From the day of Basant Panchami, 'Abhyudaya', the free coaching facility for students of the state appearing in various competitive examinations will commence,” he said.

“In the first phase, in 18 divisional headquarters of the state, coaching will be imparted physically and virtually. Officials will also devote their time and experts will also be posted there," he added.

“The classes will be held physically as well as virtually and guidance will be given for various examinations be it for NEET, IITJEE, NDA, CDS or UPSC examinations. The coaching centres will give a new platform to youths and motivate them to scale new heights," Adityanath said.

The chief minister announced the provision for free coaching while recalling his promise last year that no student in Uttar Pradesh will have to leave the state seeking education in other states.

Adityanath had made the promise while grappling with the challenge of bringing back to UP over 30,000 students from Kota in Rajasthan where they had been undergoing coaching for various competitive examinations amid the Covid-19 pandemic outbreak.

On the law-and-order situation in the state, the priest-turned-politician said, "We are not only tightening the noose around criminals and mafia elements, but also against professional and dynastic (khaandaani) criminals.”

The chief minister also lamented that despite UP playing a leading role in the country, it did not celebrate its foundation day earlier because people at the helm of affairs of the state earlier never even thought of it.

He also announced to start 'UP Gaurav Samman' wherein three to five citizens who bring laurels to the state will be awarded every year.

"We have seen that this year, the social welfare department identified over 1.43 lakh youths who excelled in various fields and were given scholarships. From this year, we will be identifying three to five people who have given a new identity to the state in the country as well as the world. We will be honouring them with UP Gaurav Samman," he said.

The CM also talked about the accolades received by the state for its work done during the pandemic.

"Uttar Pradesh received several accolades from foreign countries and from the WHO for commendable work done in Covid-19 management. During the lockdown, over 40 lakh migrant workers came back to UP. We not only gave food and shelter to them, but also generated employment for them at the local level,” he said.

Speaking on the occasion, Deputy Chief Minister Dinesh Sharma noted, "During the regime of earlier governments, there were no jobs or industries. But, under Chief Minister Yogi Adityanath, a ‘Ganga of development’ is flowing in UP.”

He also said, “UP Divas was celebrated for a long time in Maharashtra, but in UP itself, it was initiated only after Yogi Adityanath came to power.”

"Come, all of us should make a new Uttar Pradesh where festival of prosperity is celebrated every day. Uttar Pradesh is the state which has produced the most number of prime ministers and human resources. UP has contributed immensely to the agriculture sector. The state, however, is on the path of destruction under the BJP government,” Samajwadi Party president Akhilesh Yadav said on Twitter in Hindi.

"Heartiest congratulations and wishes to all on the occasion of Uttar Pradesh Divas. BSP has always been struggling socially and politically for the happiness, fulfilment and self-reliance of people of the most populated state. 'Satta ki shakti' (being in power) would definitely prove to be more helpful in this,” BSP supremo Mayawati tweeted in Hindi.

UP Congress chief Ajay Kumar Lallu said in a tweet, "Heartiest greeting and wishes to all on the ''sthapna divas'' of UP, which has various cultures and languages embedded in it."

Every year, January 24 is marked as the foundation day of Uttar Pradesh.