Soon after gangster Vikas Dubey was arrested in Madhya Pradesh, several Twitter users had predicted he would be killed in an 'encounter'. Less than 24 hours later, the predictions came true. 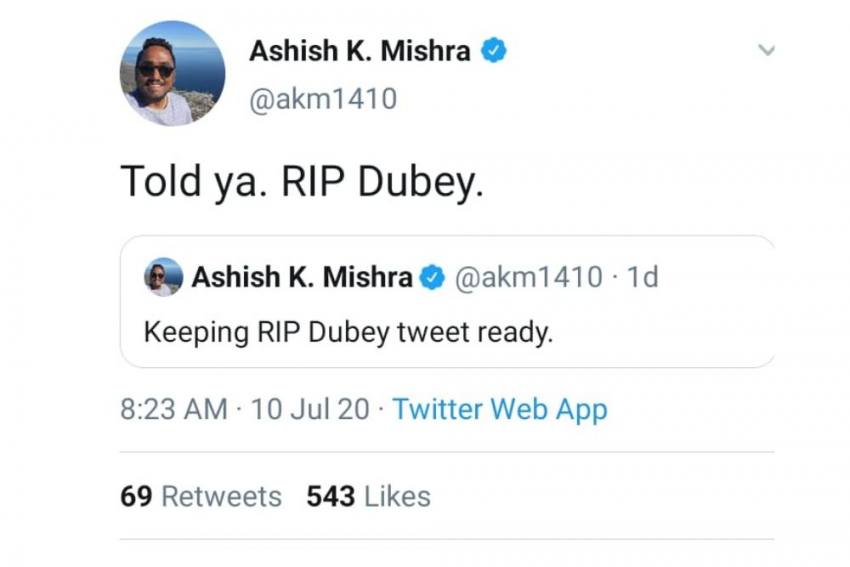 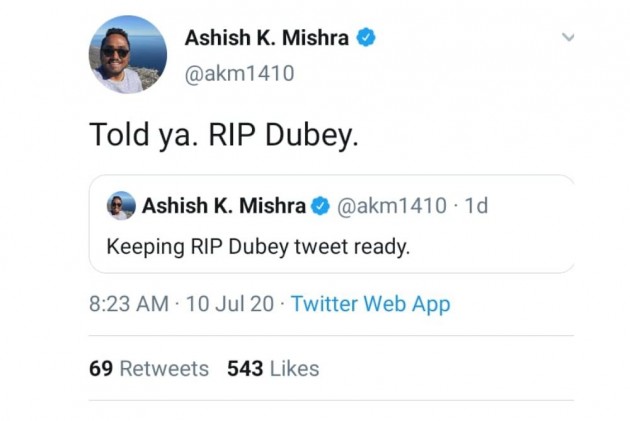 When notorious gangster Vikas Dubey was nabbed by police in Madhya Pradesh’s Ujjain on Thursday morning after a week-long manhunt, many netizens had predicted his ‘encounter’. Less than 24 hours later, as the events unfolded, the predictions came true all at once. The criminal wanted in the killing of eight policemen in Kanpur was killed in a brief shootout on Friday morning when he was being brought to Kanpur from Madhya Pradesh, police maintained.

A tweet by a TV journalist was nothing less of a premonition of sorts. Soon after Dubey was arrested in a dramatic style near a temple in Ujjain, the journalist, Akshay Dongare, wrote on Twitter: “But you never know, The tyre of police car may get punctured and Dubey might try to a snatch pistol from cops and try to run away while firing.” Dubey’s last moments almost followed the same sequence, as per police, except that the vehicle he was seated in is said to have overturned.

But you never know, The tyre of police cars may get punctured and Dubey might try to a snatch pistol from cops and try to run away while firing.

Either UP police read Dongare’s tweet or he is an astrologer, one of his colleague’s told him.

Another user was rather certain about the fate of the criminal. Soon after he was taken in custody by the Madhya Pradesh Police, a Twitter user, Ashish K Mishra, tweeted: “Keeping RIP Dubey tweet ready.”

Less than a day later, his words came out true. He wrote, “Told ya. RIP Dubey.”

Senior TV journalist Rajdeep Sardesai was trolled on Thursday after he tweeted, “A retired IPS officer tells me: ‘It’s unlikely Vikas Dubey will be caught; he and associates will be mostly ‘encountered’, they know too many secrets about too many ‘big’ people’” well, it’s day 6 since the gangster escaped after killing 8 policemen. Watch this space!”

A retired IPS officer tells me: ‘It’s unlikely Vikas Dubey will be caught; he and associates will be mostly ‘encountered’, they know too many secrets about too many ‘big’ people’” well, it’s day 6 since the gangster escaped after killing 8 policemen. Watch this space!

When Dubey was arrested, people trolled Sardesai for his ‘prediction’ and the credibility of his ‘sources’. But the events that unfolded on Friday ‘vindicated’ his tweet.

Even former J&K Chief Minister Omar Abdullah tweeted in support of Sardesai and said people who were criticising the journalist “are quietly washing off copious amounts of egg off their faces.”

As expected the people who made fun of this tweet are quietly washing off copious amounts of egg of their faces. https://t.co/vZtstzcrY3

Dubey’s arrest had got many anticipating that he might reveal ‘nexus between mafias and the politicians’. Others awaited the ‘big secrets’ to be revealed. But a Twitter user, Anuraj Srivastava’s apprehensions proved genuine: “We’ll only get to know his political nexus if that does not involve the current government…Otherwise, somehow, he’ll ‘do something’ and will be ‘encountered’ like many others!”.

Another user wrote: “Extra-Judicial killing of #VikasDubey won’t be acceptable, let the Law take its course, if Terrorists like Ajmal Kasab Can be given such homely treatment why will Vikas Dubey be devoid of his Human rights? Many are predicting his encounter @Uppolice @UNHRWO @hrw @AIIndia.”

Another social media user, Bibu Bose, whose bio on Twitter reads, “a sensitive activist and a political analyst”, tweeted after the arrest of Dubey: “Won’t be shocked if he is killed in an encounter after his arrest.”

This was my prediction 24 hrs back.And after 24 hrs Vikas Dubey killed in an encounter.
Dead man tells no tales. pic.twitter.com/7zyXJaUB1D

A day later, after his prediction came true, a part of Bose’s tweet read: “Dead man tells no tales.”